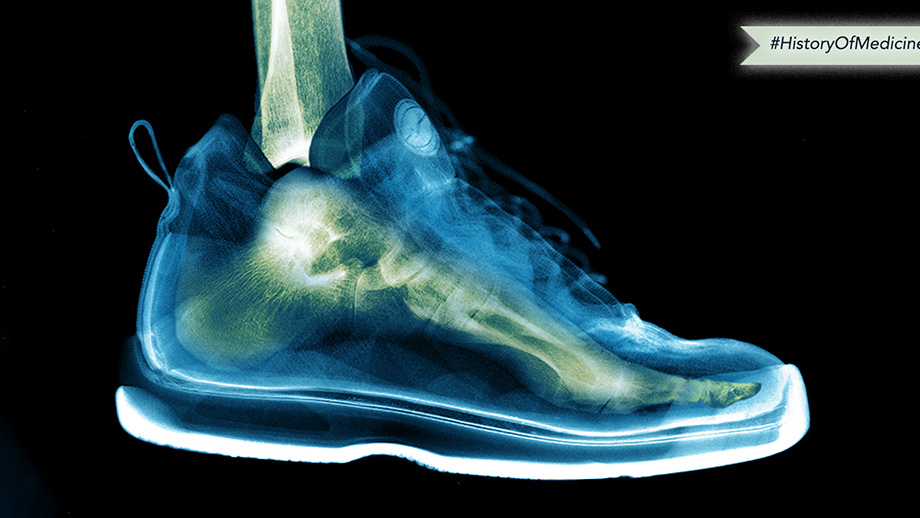 In today’s world, doctors order X-rays to diagnose all sorts of problems: a broken bone, pneumonia, heart failure, and much, much more. Mammography, the standard screening method for breast cancer, uses X-rays.  We barely think about it, it’s so ubiquitous. But not so long ago, a broken bone, a tumor, or a swallowed object could not be found without cutting a person open.

Wilhelm Roentgen, Professor of Physics in Wurzburg, Bavaria, discovered X-rays in 1895—accidentally—while testing whether cathode rays could pass through glass. His cathode tube was covered in heavy black paper, so he was surprised when an incandescent green light nevertheless escaped and projected onto a nearby fluorescent screen. Through experimentation, he found that the mysterious light would pass through most substances but leave shadows of solid objects. Because he did not know what the rays were, he called them ‘X,’ meaning ‘unknown,’ rays.

Roentgen quickly found that X-rays would pass through human tissue too, rendering the bones and tissue beneath visible. News of his discovery spread worldwide, and within a year, doctors in Europe and the United States were using X-rays to locate gun shots, bone fractures, kidney stones and swallowed objects. Honors for his work poured in--including the first Nobel Prize in physics in 1901.

Clinical use of the X-ray flourished, with little regard for potential side effects from radiation exposure. There were a few early suspicions from scientists including Thomas Edison, Nikola Tesla, and William J. Morton, each of whom reported injuries they believed resulted from experiments with X-rays. But overall, early use of X-rays was widespread and unrestrained, even to the degree that during the 1930’s and 1940’s, shoe stores offered free X-rays so that customers could see the bones in their feet.

We now have a far better understanding of the risks associated with X-ray radiation and have developed protocols to greatly minimize unnecessary exposure. And while X-rays remain a cornerstone of modern medicine, their discovery paved the way for the development of today’s broad spectrum of imaging techniques, including magnetic resonance imaging (MRI), computed tomography (CT), ultrasound, echocardiography, and many others -- some of which avoid the use of radiation altogether. Not a bad legacy for an accidental discovery.

Read more about the risks of medical imaging in ‘To Scan or Not To Scan? The risks and benefits of CT scans — and what you can do to protect your children’