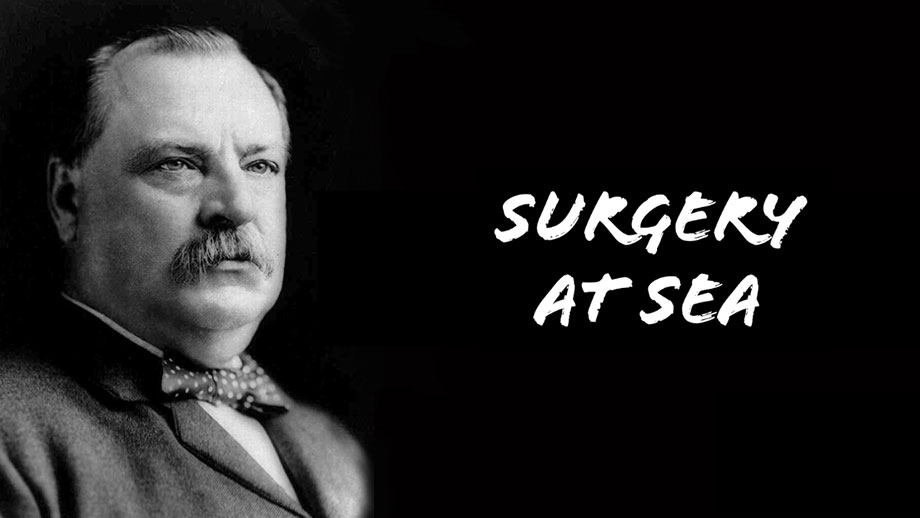 May 5, 1893, marked the day Grover Cleveland was sworn into office as President of the United States for the second time. He is the only president to serve two non-consecutive terms in office, losing reelection in 1888 to Benjamin Harrison before winning once again in 1892.

As President Cleveland settled back into the White House, he noticed a rough patch on the roof of his mouth. The bumpy patch grew rapidly, prompting the President to seek medical attention in June of 1893. At 56 years old, his health was already an area of concern and public discussion; he was overweight, had gout, and frequently enjoyed cigars.

Physicians reached a prompt conclusion, “It’s a bad looking tenant, and I would have it evicted immediately” said White House physician, Dr. Robert O’Reilly. President Cleveland was told plainly—he had a cancerous tumor, and if it were not removed he would soon die. The newly re-elected President was at a crucial impasse; in his view, this was no time for the American public to get wind of a medical emergency.

The United States was in the midst of severe economic turmoil. The Panic of 1893 caused vast unemployment, hundreds of business closures, and financial devastation within the railroad industry. Radical Reconstruction had been thwarted years prior, social and economic progress destroyed.

Americans everywhere were struggling. Debate in Congress swirled around renewing the Silver Purchase Act or passing the Gold Standard Act. Under the Silver Purchase Act, bimetallism allowed US currency to be backed by gold and silver, creating cheaper dollars and boosting inflation so farmers and other workers could survive.

How would the word of a deadly tumor affect a trembling nation? The people never got a chance to find out. President Cleveland’s fears that any knowledge of his failing health would trigger widespread financial panic took priority. He agreed to surgery under one condition: the tumor had to be removed secretly.

President Cleveland announced a vacation aboard his friend’s yacht the Oneida, for a four-day fishing trip through the Long Island Sound and Buzzards Bay, docking at his summer home in Cape Cod. For the surgeons, there was one big catch: the risky surgery had to be performed on the moving vessel and the procedure could not leave a visible scar.

On July 1, 1893, Dr. Joseph Bryant, President Cleveland’s surgeon, assembled a team of six surgeons and covertly boarded the disguised yacht. In ninety minutes’ time, as the President was strapped to a chair and sedated with ether, surgeons removed his entire upper-left jaw and five teeth. The tumor, verrucous carcinoma, was extracted without any external incision, leaving his thick trademark mustache perfectly intact.

The successful surgery was an unprecedented achievement in American medicine. Dr. Bryant and his team saved the President’s life and simultaneously debased rumors of Cleveland’s failing health. But many secrets are tough to keep when you are president, and the cover-up wasn’t without casualties. E.J. Edwards, a journalist in Philadelphia, wrote about the surgery in late August. The White House denied it and discredited him, making a public display to destroy his reputation and dispel rumors.

The secret was kept anchored to the bottom of Buzzard Bay for over two decades. Details of the procedure were finally revealed 25 years later by one of his surgeons, Dr. William Williams Keen. Oral surgeons continue to marvel at this surgery to this day. The speed, precision, and risk taken to save President Cleveland’s life were quite literally one for the history books. But not until those who held the secret pact decided it was time to share, of course. An American story, indeed.