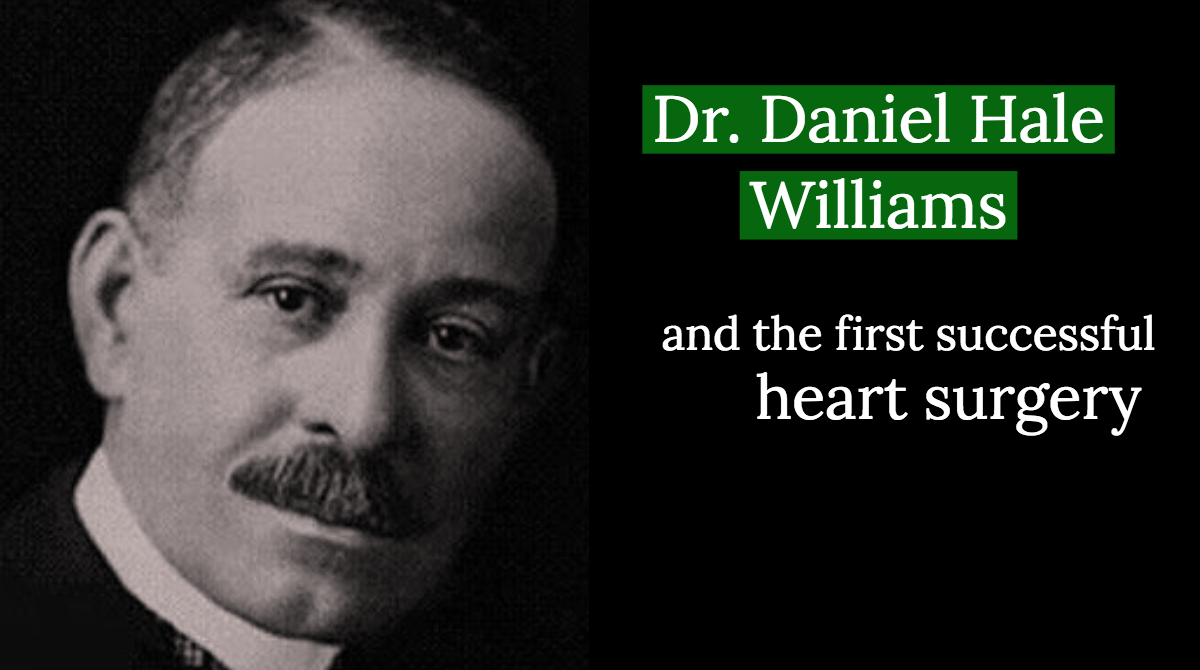 “A people who don’t make provision for their own sick and suffering are not worthy of civilization.”
–Daniel Hale Williams

The son of a barber, Daniel Hale Williams founded the first black-owned hospital in America, and performed the world's first successful heart surgery, in 1893. Williams was born in 1858 in Hollidaysburg, Pennsylvania, the fifth of seven children. After his father died, his mother, Sara Price Williams, moved the family several times. Young Daniel started as a shoemaker, but quickly knew he wanted more education. He completed secondary school in Wisconsin. At age 20, Williams became an apprentice to a former surgeon general for Wisconsin. Williams studied medicine at Chicago Medical College.

After his internship, he went into private practice in an integrated neighborhood on Chicago's south side. He soon began teaching anatomy at Chicago Medical College and served as surgeon to the City Railway Company. In 1889, the governor of Illinois appointed him to the state's board of health.

Determined that Chicago should have a hospital where both black and white doctors could study and where black nurses could receive training, Williams rallied for a hospital open to all races. After months of hard work, he opened Provident Hospital and Training School for Nurses on May 4, 1891, the country's first interracial hospital and nursing school.

One hot summer night in 1893, a young Chicagoan named James Cornish was stabbed in the chest and rushed to Provident. When Cornish started to go into shock, Williams suspected a deeper wound near the heart. He asked six doctors (four white, two black) to observe while he operated. In a cramped operating room with crude anesthesia, Williams inspected the wound between two ribs, exposing the breastbone. He cut the rib cartilage and created a small trapdoor to the heart.

Underneath, he found a damaged left internal mammary artery and sutured it. Then, inspecting the pericardium (the sac around the heart) he saw that the knife had left a gash near the right coronary artery. With the heart beating and transfusion impossible, Williams rinsed the wound with salt solution, held the edges of the palpitating wound with forceps, and sewed them together. Just 51 days after his apparently lethal wound, James Cornish walked out of the hospital. He lived for over 20 years after the surgery. The landmark operation was hailed in the press.

In 1894, Dr. Williams became chief surgeon of Freedmen's Hospital in Washington, D.C., the most prestigious medical post available to African Americans then. There, he made improvements that reduced the hospital's mortality rate. In 1895, he helped to organize the National Medical Association for black professionals, who were barred from the American Medical Association. Williams returned to Chicago, and continued as a surgeon. In 1913, he became the first African American to be inducted into the American College of Surgeons.

As a sign of the esteem of the black medical community, until this day, a "code blue" at the Howard University Hospital emergency room is called a "Dr. Dan." In words that could later be said of Vivien Thomas, a colleague wrote, "His greatest pride was that directly or indirectly, he had a hand in the making of most of the outstanding Negro surgeons of the current generation."

Excerpt from PBS American Experience “Partners of the Heart.”