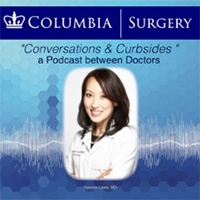 Dr. Tirissa J. Reid is an endocrinologist and expert in obesity medicine. She is assistant professor of medicine here at the Columbia Metabolic and Weight Control Center.

Dr. Reid joined Dr. Hyesoo Lowe on an episode of Columbia Surgery’s podcast Conversations and Curbsides. The two doctors discuss the impact of various factors on obesity–including the Covid-19 pandemic, hormones, stress & sleep, and gender–ultimately emphasizing the important fact that obesity is not merely a function of willpower, but a disease that can be treated.

The following is a transcription of the discussion, and is lightly edited for context and clarity.

Jump to a Section:

Thank you so much for inviting me here to talk about this important topic.

THE PANDEMIC’S EFFECT ON WEIGHT GAIN

So part of my evaluation for thyroid disease is I ask people about their weight, has it changed recently? And invariably, most of my patients will say, well, I've been fine except that I put on a bunch of pounds during the pandemic. Have you noticed that weight issues have increased during the pandemic?

Absolutely. I think we've heard that phrase “the COVID 19 pounds” right? Which is very true. Patients have come in whether they had an issue or concern about weight before the pandemic or not, we're finding that people are struggling with their weight and I think it's just been difficult, obviously right?

There are a lot of possible contributors, but I think number one, just being at home when we were all stuck at home and you're just a few feet from the kitchen all day long and sometimes just seeing something may prompt you to eat whether you're hungry or not, right? So that alone was an issue.

And then also the stress and the loss of control, which we all felt, especially at the beginning before there were vaccines. That loss of control can cause stress and emotional eating. I actually did a talk, part of a panel earlier in the year for the National Eating Disorders Awareness Week, and there has been a serious uptick in eating disorders as well during the pandemic. Again, because of the extreme amount of stress that we're under leading to emotional eating.

As well as, of course, the severe decrease in physical activity. Even though we didn't all count  our commute as activity, we realize now that going up and down those subway stairs, walking a few blocks after parking, it actually mattered.

Right? The daily activities of just walking from one place to the next, even if it's to a parking lot or to a subway station. Absolutely. Very interesting.

What is the relationship between hormones and obesity? A lot of my patients will say, I've been under a tremendous amount of stress. Can that alone make it hard to lose weight?

Absolutely. That's the thing the public is just starting to realize: how many different factors contribute to weight.

They may not know the mechanism, but they say, for instance, “Stress is causing me to have problems losing weight.” Poor sleep is another factor that they recognize, this is just really difficult for me. My appetite has increased, I just crave carbs all the time.

Stress and sleep, together, affect our hormones.

There are many hormones that affect your weight, including the thyroid, which affects the metabolism. Others affect your level of hunger, or how full you feel, even as you're eating a meal, at some point there's the signal that “I'm full, I want to stop.” Even the hormones that control that are affected by whether you're not getting enough sleep or whether you're under stress.

These hormones also ultimately have the common pathway of increasing your level of hunger, because your body wants a source of fuel for extra energy to deal with that stressor.

If you're tired and sleep deprived, your body's looking for a quick source of fuel. What's the quickest way to get fuel in? It's a simple carbohydrate. So when people think, “Oh my goodness, I'm craving potato chips,” that's the perfect thing because it's just simple carbohydrates to give you some energy, right now, that your body needs. But then there's some fat in there also.

So some of the choices that people make when they're stressed or sleep deprived, they notice the result, but there is a causal pathway that involves the hormones.

Fascinating. And unfortunately you can't just check individual hormones and say, okay, this is what's going on. You really do have to have a full evaluation, and I know this is part of what you do, is to really explore and dig deep into what is a patient going through and what barriers could there be to making it hard to lose weight.

The other thing I've noticed is there a sex difference between weight loss ability. I will see couples come in and say, well, I went on the same diet as my husband, I lost 5 pounds, but my husband over here lost 25 pounds and we did the same exact thing. So why? Is it a thing? Do women have more trouble than men?

It is, it is a thing, you're right? But I will also say it doesn't mean that it's easy for men, either to lose. They also can use some help and assistance in losing weight.

But it is a thing. And I also have couples where, and invariably it's the woman who initially came in and saw me and maybe she saw me for six months or a year.  The husband says, wow, she is doing great. So the husband comes in and loses, in only six months, more than she had lost in a year. And so it can be really frustrating.

But the number one thing to remember, beyond gender differences, is that there are differences in individuals.

We each have our own history, going back even to our in utero environment, when we were in our mother's wombs.

Oh wow. So that makes a difference.

Yes, that can... Exactly. Even stuff like that. Things that happen then can have effects on weight later.

So that's going to be different for every person. There is a lot of variability between any two people.

Still, in terms of males and females, we know that women have higher levels of body fat and lower levels of muscle compared with men.That makes sense just historically that women need a certain amount percent of body fat, during their childbearing years, to have regular menses, and to be able to hold a child during a pregnancy. So there's a biological reason for it.

But men then having that greater muscle mass means that they're burning more calories throughout the day. You always hear “muscle burns more calories than fat.” And it's true that muscle mass is actually the number one determinant of your metabolic rate.

So men do have that advantage. And then if they kind of ramp that up with physical activity–if both are doing physical activity–the person with the greater amount of muscle mass is going to be burning a lot more calories.

NO, IT’S NOT ABOUT WILLPOWER

So there are explanations that would suggest that it's not just about willpower, right? It's not that one person is weaker than another and therefore is less successful with weight loss. There are so many factors involved.

You're absolutely right. It's just now–even in the medical community–that people are becoming more and more aware that losing weight is not just a matter of willpower. It was only actually in 2013 that the American Medical Association first put out a statement saying that obesity is indeed a disease.

Wow. That's not that long ago.

2013, that's not even 10 years ago. And the rest of the medical community really hasn't caught on. It's slow. But people are starting to understand, we know that 70% of U.S adults are overweight with 40% of those being people who have a body mass index in the range of obesity.

Are we really saying 70% of adults just, they're not disciplined? That's just obviously not the case.

And also people who have struggled with weight, people that we see, they've been struggling since they were a child. So to think, “Oh, they didn't have willpower as a child,” that just doesn't make sense.

So I think it's great that people are recognizing, number one, that there are multiple causes.