From the O.R. to the ICU, 25 Years Later It’s Still a Family Affair for Sibling Duo in Pediatric Surgery 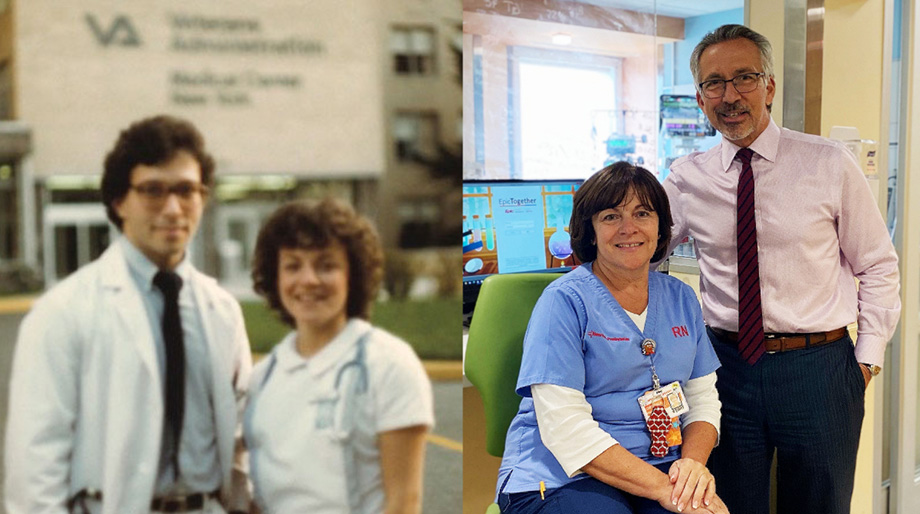 Critical care pediatric nurse Lisa Richardson and Chief of Pediatric Surgery Steven Stylianos, MD, have worked together at NYP/Columbia for over 25 years. But they’ve known each other a lot longer than that. A lifelong knowledge, in fact: they’re siblings. Equally dedicated, enormously kind, Ms. Richardson and Dr. Stylianos seek to bring a family touch to the care of patients and their families through the toughest times.

Logistically, here’s how it works: Dr. Stylianos will operate on a child and bring them up to the ICU, where Ms. Richardson takes over their care, helping to guide their families through the recovery process. At some point, she may break the ice a bit and say to the family, “By the way, don’t talk about your surgeon too much. He’s my brother.”

That may be one of Ms. Richardson and Dr. Stylianos’ favorite parts, receiving the reactions of families as they learn the sibling connection.

“Oh, they think it’s amazing,” says Ms. Richardson. “They think it’s the most wonderful thing in the world.” Dr. Stylianos says some families have begun to cry as they realize “a family is taking care of their family.”

“They assume we come from a loving family,” says Ms. Richardson, “which is really fun, to give my parents credit where credit is due.”

“We’re children of the typical European immigrant story,” says Dr. Stylianos. Their parents came to America from Greece with “no language, no money, no education,” and proceeded to build a life for themselves and their two children. “They told us, ‘Go to school and be somebody,’ and we did.”

Dr. Stylianos, who is five years older than his sister, was the first member of his family to go to college. Graduating from Rutgers University and going on to medical school at NYU, he’s led the Division of Pediatric Surgery at Columbia/NYP Morgan Stanley Children’s Hospital for over a decade.

Ms. Richardson says her big brother has always set a good example. “I guess I followed in his footsteps,” she says. “Even when I was in college crying about organic chemistry, he and his roommate were telling me to take an orange and put toothpicks in it to look at a molecule.”

At a time when young women were encouraged to choose between teaching and nursing, Ms. Richardson chose nursing because the schedule appealed to her—and because her older brother had already led the way into medicine. She began nursing school at Hunter College, just down the street from where her brother was in medical school.

“That was interesting, that life and education brought us right next door to each other,” recalls Dr. Stylianos.

Upon graduation Ms. Richardson was offered a job on the adult orthopedic floor at Columbia—the same hospital where her brother was a resident. But when he learned of his sister’s potential assignment, Dr. Stylianos intervened.

“You’ve got to understand, my sister is pretty petite,” he says. “I just didn’t see her lifting up all those people with broken hips.” So, he reached out to a colleague at the children’s hospital and they brought her on as a nurse on the medical-surgical floor. From there, she quickly transitioned to the ICU, where she’s been ever since. 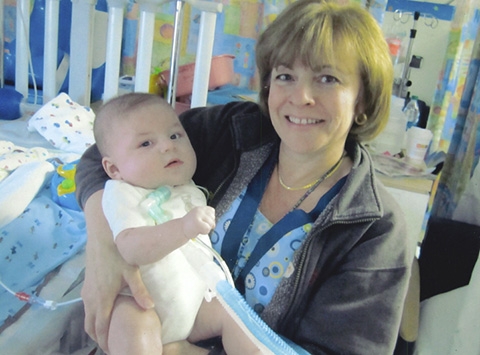 “She'll never admit it,” Dr. Stylianos says, laughing, “but I did call in a favor.”

“I've made him a better doctor because all the nurses love him,” she says, only half-joking. “I would always tell him if you didn't want to be called in the middle of the night that you will not leave the bedside a mess and that you will respect your nurse. Listen to your nurse because they really do know what's going on.”

She says her brother seems to have internalized the message and has a reputation for respecting the entire care team; staying involved with every family, many long-term. “I know some of it is his personality,” says Ms. Richardson. “But I’m hoping that I helped influence some of it too!”

Dr. Stylianos agrees. “We kid each other a lot, but I think the depths of our pride for one another—you can’t quantify it,” he says. “I've said it privately and publicly, I think she's one of the best nurses in the hospital. And she's probably pretty proud of what I do, too.”

Indeed. “He has a passion for what he does and he will do it to the best of his ability,” says Ms. Richardson. “I can’t take that away from him. He’s just an amazing surgeon, an amazing person.”

They both credit their parents with giving them the opportunity to succeed. “We were very fortunate that our parents aged very well, too,” Dr. Stylianos says. “Well into our careers, they were still around knowing that we went to work together. And I think that was a source of great pride and comfort for them.”

Ms. Richardson remembers the family celebrating their involvement in the highly publicized separation of conjoined twins Carmen and Rosa Taveras in 1993, for which Dr. Stylianos led the operation and Ms. Richardson provided follow-up care. “It was nice for us, but it was also nice for my parents,” she says. “I mean, the bragging rights that went with that for Greek immigrants with no education! The cover stories, the news media…they just were extremely proud.”

If they reiterate one thing over and over, it’s the pride they feel in helping others, in doing good work. “When I go to work, I never leave feeling so good as if I make the family feel comfortable, along with taking care of the child,” she says. “And I think that’s a big aspect for both of us. We both take passion in our jobs.”

These days, their two families are close, spending holidays together with their kids and enjoying their respective grandkids. At some point, retirement may be in the works for both of them. Although, Ms. Richardson suspects her brother will work “until they kick him out of the building.” Until then, these remarkable siblings will continue to extend their family ethos through the care of others each and every day.