From Parents.com: My Son Was Born With Craniosynostosis—Here's What Parents Need to Know About the Birth Defect of the Skull 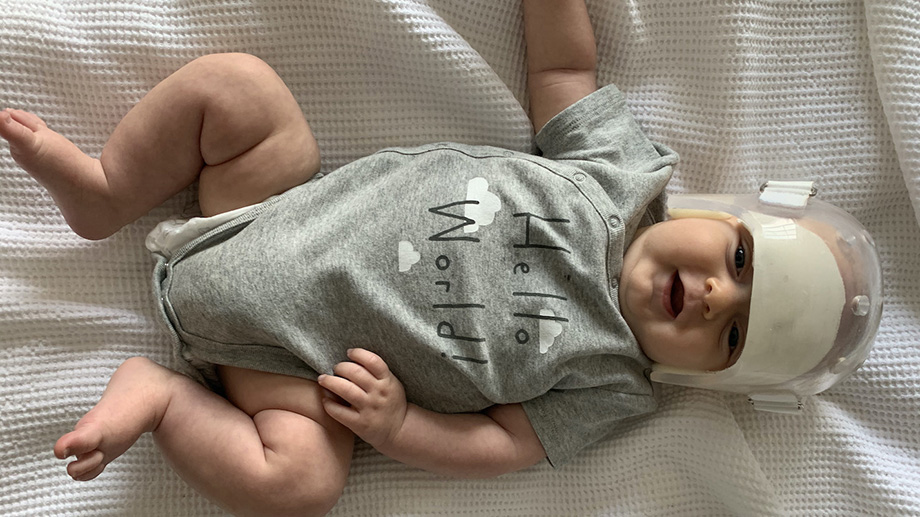 By Carrie Mullins
This article was originally published in parents.com.

In the weeks leading up to my son Oliver's birth last April, all I could think of was COVID-19. New York City was averaging hundreds of deaths per day from the virus, and state protocols around labor and delivery were in flux. When we made it safely through an unplanned C-section and were cleared to go home from the hospital less than 36 hours after my surgery, I was filled with relief.

I'd been so concerned with COVID-19 that it took me a while to notice Ollie's head was oddly shaped. I thought he was beautiful, of course, but there was no denying he had a protruding forehead, and his skull was elongated at the front and back, like a torpedo. I asked about it at his first pediatrician's appointment, and then again over the next few weeks, but because of COVID-19 the practice was rotating doctors, and the visits were always brief. "Babies have weird heads," one doctor told me in a tone meant to be reassuring but which made me feel embarrassed for worrying about my kid's head shape during a pandemic.

She wasn't wrong: many babies are born with misshapen heads because of their position in the womb or the pressure of birth and they self-correct over time. But as he grew, Ollie's head kept getting bigger, its contours more extreme. Then one day Ollie was laying on his play mat and his older brother came to lay down next to him, foreheads touching. The difference was startling. I gave into my gut and FaceTimed my cousin Brian Howard, M.D., a neurosurgeon at Emory. I'd waited because I knew that like all doctors, he'd been dragged into the trenches of COVID-19, and I didn't want to bother him. Brian took one look at Ollie and asked, "Do you know about craniosynostosis?"

Craniosynostosis is a birth defect in which one or more sutures on a baby's head close prematurely. Normally, newborns have flexible sutures separating the bones in their skull. This creates the "soft spots" which give new parents so much anxiety but are crucial for allowing the rapid brain growth which occurs before age 3.

There are different types of craniosynostosis depending on which sutures fuse, and Ollie had the most common: sagittal synostosis (also known as scaphocephaly from Greek words meaning boat-shaped head). It affects the main suture running from the front to the back of the skull. Left untreated, craniosynostosis causes an abnormally shaped head that can limit the brain's growth and cause pressure to develop within the skull.

Doctors don't know what causes craniosynostosis, which occurs in approximately one out of 2,000 to 2,500 live births. It appears more often in boys than in girls, and it can be genetic. In some cases, it's associated with other abnormalities such as Apert or Pfeiffer syndrome.

We were relieved to learn that Ollie's case was non-syndromic, meaning he had no other apparent abnormalities. Our primary concern was his cognitive development, but as David Wrubel, M.D., pediatric neurosurgeon at Children's Healthcare of Atlanta, says, "A single suture synostosis doesn't have significant effects on a child's neurocognitive development unless it remains untreated to the point that the patient begins having elevated intracranial pressure." Ollie's brain would be fine, but first he needed surgery.

We'd gone to see Mark Souweidane M.D., director of pediatric neurosurgery at NewYork-Presbyterian/Weill Cornell Medical Center. He explained that in the past, craniosynostosis was almost always fixed through cranial vault remodeling, a major five-hour or so surgery that requires a neurosurgeon to lift a large portion of bone from the baby's skull, then reshape and expand it before grafting it back into her head.

Ollie was a candidate for another option—an endoscopically assisted strip craniectomy. Although the risk profiles of the surgeries are almost equivalent, Dr. Souweidane has come to prefer this procedure in which he uses a small camera to help him cut open the prematurely fused sutures. This option requires smaller incisions, has a lower chance of infection, and can be performed in less than two hours, meaning less time under anesthesia, a reduced chance of a blood transfusion, and faster recovery.

"My whole career has been focused on this idea of less invasive and more efficient ways of treating these diseases," says Dr. Souweidane. "The difference between the surgeries, as far as a measurable outcome, is equivalent, but buried in between lies the detail. For example, traditional remodeling has a 9 to 1 greater chance of a transfusion and requires all these standard perioperative support systems, like a catheter inserted into the urethra to empty the bladder. For me, as a dad, it's hard to think of my kid undergoing all that compared to what we don't do with the strip cranium endoscopic suturing."

The postoperative picture appealed to us also. After the traditional surgery, Ollie's face would be so swollen that he wouldn't be able to see, which can be very disorienting, and recovery would take one to two weeks. After the endoscopic procedure, there'd be less swelling, I could breastfeed in the hospital, and though I hardly believed it until it came true, Ollie would be acting like himself after only two days. The downside would be a few months of helmet therapy, but for us, the trade-off for a less invasive surgery was worth it.

But early invention was key. Unlike remodeling surgery which is performed on babies 6 months and older, a strip craniectomy can only be done on babies who are less than 4 months old, when their heads are at their most malleable. Ollie was almost 9 weeks old when we FaceTimed my cousin in Atlanta. We'd been staying in a rental house outside of the city, and we immediately packed up and rushed home, where Ollie was diagnosed just in time to have the option of the strip craniectomy.

Before Ollie's surgery, we were assigned a craniofacial team that included Thomas Imahiyerobo, M.D., director of cleft and craniofacial surgery at Columbia/New York Presbyterian. He promised us we'd see immediate changes in Ollie's head shape after surgery, but it was still incredible to see how quickly Ollie's skull began to round out.

Some doctors think that because a strip craniectomy releases the sutures on a baby's skull and is done so early in life, their head will correct on its own. Other doctors follow surgery with helmet therapy to ensure the skull's proper development, and on Dr. Imahiyerobo's recommendation, that's the path we chose for Ollie. It's not easy to make your baby wear a heavy, sweaty helmet for 22 hours a day, but Ollie seemed to care less than I did. Just eight months after his diagnosis, his head had a cephalic index of 72. In other words, it's cue-ball normal.

Ollie just turned 1 and when you look at his head, all you can see is his adorable smile.