Profile in Hope: A New Surgery Helps Improve the Lives of Babies with Spina Bifida 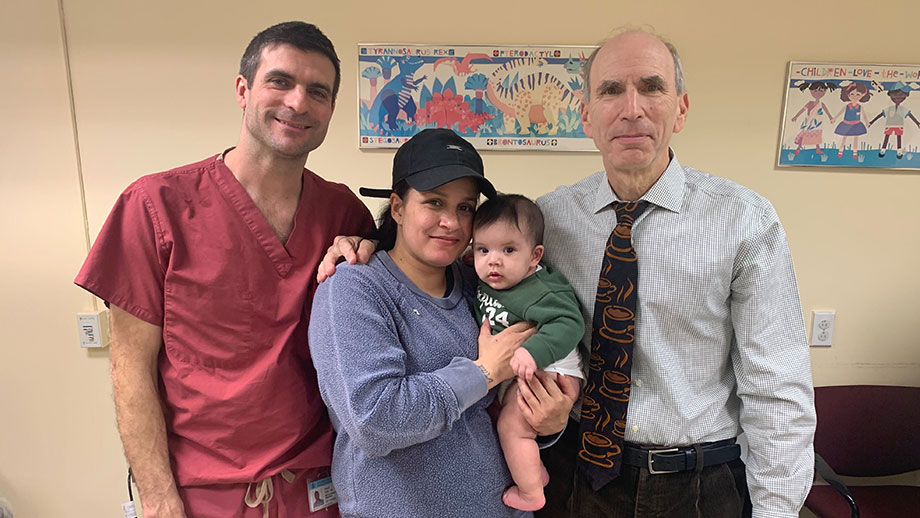 “Hope is the thing with feathers
That perches in the soul
And sings the tune without the words
And never stops at all.”
― Emily Dickinson

Hope is a funny thing — you can’t measure it and you can’t describe it, but it is felt both in its abundance and in its absence. And in the most dire of situations, hope is what keeps us going, time and time again. Hope is what drove Madeline Guzman to ask for more, ask for a second opinion about a grave diagnosis. Hope is what spurred a team of specialists to try an entirely new procedure on a baby—still in the womb—that hadn’t really been done before anywhere in the hospital, city, or region.

Madeline Guzman was 17 weeks pregnant when a routine clinic visit turned into a sonogram at a hospital in another part of town. The doctors took Madeline into their office to talk — it was serious.  The sonogram revealed her baby had spina bifida, a neural tube defect that can result in moderate to severe disability. Terms like ‘quality of life’ and ‘comfort level’ were thrown around, but Madeline could barely focus. “I was sitting there and I felt so bad,” recounted Madeline. “They were telling me there was nothing they could do. I felt like there was no hope.”

Spina bifida is a rare condition that affects the spinal cord and is typically present at birth. It is divided into multiple types, one of the most severe of which is known as Myelomeningocele. It can cause moderate to severe disability including incontinence, numbness and the inability to move the legs and/or feet.

“I left that other hospital sobbing — I just couldn’t understand why this was happening and how limited my options were,” recounted Madeline. Hope, while not prescribed, was surely in need at this moment, so Madeline turned to her primary team. “I just knew with all the technology available today there was something that could be done and they could help me find them.” Madeline called her regular practice with the news and with the blind hope they would have answers.

Within days, specialists from the Morgan Stanley Children’s Hospital of New York (MS-CHONY) at Columbia University had Madeline in her office, discussing options. “These doctors had me come in and they explained everything,” said Madeline.

These doctors — Dr. Vincent Duron, Dr. Feldstein, Dr. Russell Miller, and Dr. Lynn Simpson, were part of a pediatric team specifically treating neonatal conditions, including spina bifida. Until only recently, this type of spina bifida could only be treated through surgery within the first few days of newborn life — what healthcare providers call the “postnatal” period. This option comes with several limitations, including high-risk outcomes for the baby and mother.

But now there was another option: performing surgery on the fetus while still in the womb, or prenatal surgery. Prenatal surgery is thought to help reduce the incidence of pressure on the brain and the need for a shunt, may improve the ability of babies to walk independently, and may be associated with improved mental development compared to postnatal surgery options. Only a handful of surgeons in the country have gone through the extensive training required to perform this procedure—fortunately, this team of surgeons were some of them. The team discussed amongst themselves and this prenatal approach seemed to benefit Madeline and her baby the most.

The team walked Madeline through her options. “The doctors explained everything to me — and there’s no other way to describe them but ‘cool’,” Madeline said, laughing. “They were cool and calm about everything and I trusted them completely. I told my husband I knew this was the right move. He was more afraid than I was,” joked Madeline. “I knew this would help my baby.” Madeline confessed her hope had transformed into steely reserve about her and her baby’s health. 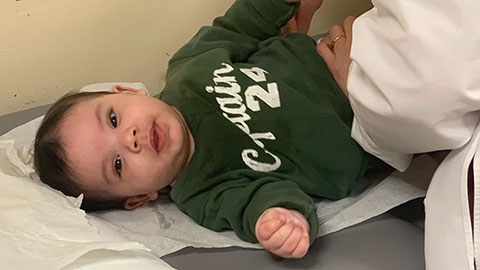 Madeline underwent surgery at 24 weeks. The surgeons made a cesarean-type incision, the uterus was brought out of the wound and accessed through small incisions. The baby’s spine was then repaired. The process involved cutting into the myelomeningocele sac and dissecting the neural placode, releasing it from surrounding tissues. The team created skin flaps and covered up the inclosure for both fetus and mother. The entire procedure took around four hours.

Flash forward months later, and Madeleine and baby - Justin - are doing great. They are coming in for a checkup with the team soon. “The doctors are constantly available,” commented Madeline. “They really took care of us. My experience at MS-CHONY was exceptional, from the nurses to the surgeons and staff, I couldn’t have asked for better care.”

The conversation is cut short — Justin cries in the background, demanding his mother’s attention. Madeline doesn't mind, though — hope, steadfast and abundant, has translated into willing and joyful duty of motherhood. “These doctors brought us so much happiness and hope. Everything is going okay.”

It’s a funny thing, hope: it transcends what’s possible. It drives us to dream for more, it fuels our most base instincts. Hope, in this case helped the Guzman’s welcome Justin into the world. Hope can make all the difference.