Diabetic since age 16, Brian Seaman longed to be a carefree kid. But when he passed out at work, dizzy and disoriented from low blood sugar, reality caught up with him. Taking insulin every day and monitoring his blood sugar had to be his new normal.

Twenty years later, Brian found himself facing a crisis—heart and kidney disease brought on by his diabetes. At age 45, he had a quadruple bypass—after which he spent 18 months on dialysis. A kidney transplant was vital, but there was another issue standing in his way; one of his doctors noticed a melanoma on his shoulder.

Brian was in his early 50s by the time he completed treatment for skin cancer and was cleared for transplant surgery. At this point, traditional transplant methods, like the national registry for deceased donor kidneys and the United Network for Organ Sharing (UNOS), would take too long. 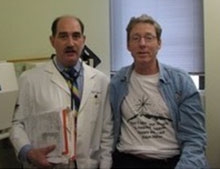 While researching living donor alternatives, Brian’s wife, Mariann, found Lloyd Ratner, MD, a pioneer in kidney transplantation and the Director of Renal and Pancreatic Transplantation at Columbia. “Another surgeon I was considering was a cowboy, with a real gung-ho personality and he made me a little nervous,” he recalls. “Dr. Ratner was brilliant, with a big heart and a sense of humor. Right away he put me at ease.”

Now, it was time to find a donor.

A niece offered her kidney, but since she was young and wanted to have a baby, doctors advised against it. Brian’s older sister offered too, but she had Parkinson’s disease and cancer. Fortunately, his other sister, Debbie, was an ideal donor though there was a problem—she had a different blood type.

Donors and recipients must have a compatible blood type to be regarded as a match. Otherwise, foreign tissues could trigger a reaction, and the body will reject the organ. “Dr. Ratner had a way to deal with that,” says Brian. “He used a procedure called plasmapheresis to filter out any antigens in my blood that might cause rejection.”

The process of plasmapheresis is a lot like dialysis. Blood of the recipient is separated into two parts: cells and plasma. The plasma—full of incompatible antibodies—is then stripped and replaced with a substitute so the body will accept the kidney.

The week before his transplant, Brian rented an apartment near the hospital where other family members joined him and Mariann in the days before the surgery. There he continued to receive nine hours of dialysis every single night. 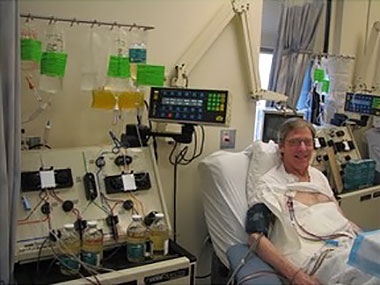 On the morning of the surgery, Brian remembers hugging his sister Debbie. “The next thing I knew I was in the recovery room,” he says. “And Dr. Ratner was standing over my bed, beaming. He goes ‘You’re peeing like a racehorse, kid. And your new kidney is working fine. Next, we have to get you a new pancreas.’”

Instead of insulin shots and a pump, a new pancreas would produce insulin inside the body, curing diabetes altogether. A functioning pancreas also protects the kidney transplant, and the new organs last far longer together.

Within a week, Brian was out of the hospital and finally free of the dialysis machine. “I felt so alive, and the transplant experience was the bigger adventure of my life,” he says. “I learned a lot about resilience. If you put your mind to it, you can bounce right back.”

Dr. Ratner helped Brian navigate two temporary side-effects of his kidney transplant as he recovered at home—high blood pressure and hair loss (a common side effect of post-transplant medications). When Brian found a lock of hair on his pillowcase, he asked, “I know this is part of the deal, but can we slow it down?” And Dr. Ratner gave him a prescription for a topical solution (minoxidil).

“Bingo, my hair came in better than ever,” he says. “And the medication had a double benefit. It also controlled my blood pressure.”

A year later, Brian had recovered enough to undergo the pancreas transplant. And at the time, in 2009, he was one of the first patients to receive this pioneering surgery.

The results were stunning. Brian was no longer diabetic. 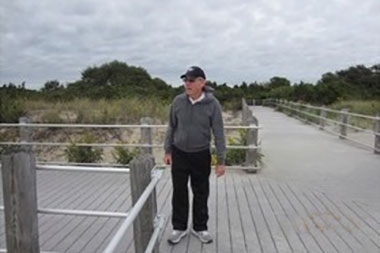 For the first time in 37 years, he didn’t have to do daily blood tests and inject himself with insulin. He started seeing a nutritionist, changed his diet and began to exercise.

“My life is fantastic now,” says Brian. “I get up and walk between four and six miles. I ride my bike. Last week I went to the Slater Art Museum [in Norwich, CT]. This week it’s an air museum near Hartford, then a visit to some local wineries.”

The first time Brian went out to dinner after his final transplant surgery, a former co-worker came up to his table, and said, “I can’t believe it’s you. I heard you were really sick and thought you died!”

“Well,” Brian beamed, “I’m alive and well and about to have a really great meal.”

Learn more about the Renal and Pancreatic Transplantation at Columbia.