Get back to doing what you love. We have more experience, more treatment options and better results for your hernia care. Call (212) 305-5947 to set up an appointment today

After Hernia Surgery, Daniel Has a Larger Life 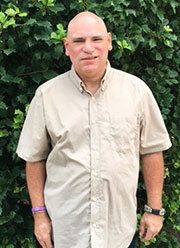 When he was only 4 years old, Daniel Borg was diagnosed with Crohn’s disease, a debilitating condition that causes weight loss, fatigue, diarrhea, pain and cramping and bleeding from the rectum. For Daniel this meant a pretty challenging childhood—one marked by several operations, home schooling and a restricted social life.

Ten years later, Daniel’s pain was so intense his doctors performed an ileostomy, making an opening in his belly that allowed his body waste to pass into an external pouch. His pain disappeared and he began to feel almost like a normal teenager.

After graduating from college, Daniel worked as a teacher and moved to Colorado. In his 30’s, he started vomiting and having trouble eating. “It wasn’t Crohn’s,” he said. “For years, I had hernia after hernia after hernia in my belly. The surgeons would fix it and then the problem would come back.”

A ventral hernia occurs when an organ pushes through an opening in the muscle or tissue where old incisions were made. This can be painful, and cause an obstruction of the digestive tract, leading to risky surgical emergencies and removal of the intestines. It can also be life-threatening.

Daniel often was so dehydrated from an obstruction that he had to go to the Emergency Room, but somehow he managed to complete his master’s in Social Work. By age 39, however, he was so worn down by these episodes that he moved back to New York to be near his family and went on disability.

In 2007, Daniel had yet another hernia operation at a medical center on Long Island. “Almost immediately I obstructed and five days later, I had another surgery and developed a life-threatening infection. Not too long after that, the hernia came back and this time, nobody wanted to operate. The surgeons said I had too many adhesions. And by now, it wouldn’t just be a matter of fixing the hernia, but of repairing my abdominal wall.” By age 51, Daniel was coping with the pain the best he could. He had endured 24 surgical procedures in all.

Desperate for relief, he came to Columbia’s Comprehensive Hernia Center and consulted with its new director, Dr. Yuri Novitsky, a world renowned hernia surgeon who is known for helping complex patients like Daniel.

By 2018, the left side of Daniel’s abdomen was so distended it looked like a grapefruit. The hernia would have to be pushed back into his belly and a piece of mesh sewn into his abdominal wall to keep the bulge from reforming. Dr. Novitsky used a newer flexible lightweight mesh, made of porous polypropylene, to reinforce the repair. This fish-net like mesh rapidly integrates into the patient’s own tissue, minimizing pain and infection. In addition, Dr. Novitsky employed his own innovative technique to reconstruct Daniel’s abdominal wall and tighten his belly, providing the best possible cosmetic result.

In April, Daniel’s father came in from Long Island to provide support, staying on a special floor of the hospital reserved for families. “Surgery went much better and much faster than I expected,” Daniel says. “No complications. And I was back home in just five days.

Now, for the first time in years, Daniel is fully engaged in life. “I feel terrific,” he says. ”I’ve been spending the summer fishing, walking on the beach, taking my dog into town, visiting friends. I have fewer problems with food — no reactions to certain dishes anymore. My belly is flat and looks pretty good.”

At 52, he’s thinking of buying a business and looking forward to dating. “It’s never too late,” Daniel says. “Thanks to Dr. Novitsky and his team, I’ve got my best years ahead.”

The Comprehensive Hernia Center surgeons are uniquely skilled to perform both laparoscopic and robotic hernia repairs. These approaches are associated with less pain and faster recovery.