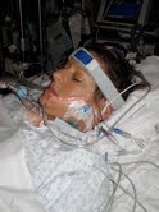 When Pamela Abma traveled to Uganda in April 2010 on a missionary trip, she took all the proper medical steps to avoid illness. A healthy, fit, 47-year-old from NJ, she received the requisite immunizations and took her antimalarial medications. While in Uganda, Pam took care to retreat under mosquito netting before the onset of dark and to use bug spray to prevent malaria-bearing mosquito bites. She drank only bottled water to avoid the intestinal parasites present in the local water supply. She had a fantastic, rewarding experience, working with other missionaries and local residents to help develop a source of clean water and lay the groundwork for a health clinic.

Pam returned to her northern New Jersey home April 15, and for six weeks, had no signs of the illness that would soon change her life. She rode with her local ambulance corps, of which she is a member, in the Memorial Day parade in her town. That night, she recalls, a fever took hold. Three more nights of fever followed, leading her to the emergency department at Valley Hospital in Ridgewood, New Jersey. “I kept telling the emergency room (ER) doctor that I had been in Africa, and finally he agreed to test me for malaria,” says Pam. The test was positive, and Pam was sent home with medications and the expectation that she would feel worse before she felt better.

But the ER doctor’s prediction could not anticipate what would follow: a rare, severe response sent Pam into a rapid downward spiral. Violent vomiting gave way to difficulty breathing, and within two days, Pam developed Acute Respiratory Distress Syndrome, or ARDS. Back in the hospital, she was sedated, intubated, and placed on a mechanical ventilator. She does not remember anything after that day.

With her lungs unable to send enough oxygenated blood through her body, her physician, Steven Jacoby, MD, contacted Daniel Brodie, MD at NewYork-Presbyterian Hospital/Columbia University Medical Center. Paramedics came from the hospital to transport Pam to the Medical Intensive Care Unit, and immediately placed her on extracorporeal membrane oxygenation, or ECMO. “Pam was very fortunate that Dr. Jacoby made that call when he did,” says Dr. Brodie. “He used great clinical judgment, and if he had not gotten in touch with us so quickly, it may have been too late.”

ECMO machines are used to help patients with ARDS by taking over the work of the lungs, which then allows the lungs to rest and recover. Unlike a ventilator, which forces air into the lungs and can cause lung injury, ECMO works similarly to a dialysis machine in that it removes the blood from the body, treats it externally in this case removes carbon dioxide and infuses oxygen, and then returns it to the body. During this version of ECMO, the blood is removed and returned through a catheter in the jugular vein. While Pam was on ECMO, she was in a drug-induced coma so that the tubing would not move and compromise her oxygen levels. Signs of progress were monitored by X-rays of her chest that were performed each day and by how her lungs interacted with the mechanical ventilator.

Pam’s doctors warned her husband and three children that there was no guarantee that the use of ECMO would be successful. They did not know if she might sustain brain or organ damage. “The doctors only began seeing small signs of improvement during my seventh day on ECMO,” Pam says. By day nine, enough fluid had drained and her lungs had regained enough function that she could be taken off ECMO. But after being in a coma for as long as she had been, she could not be awakened quickly – it took yet another eight or nine days to wean her off sedation and to start reintroducing sensory stimulation. When she woke up, Pam could not speak as she still had a tracheotomy, she was very confused, and had no strength to write. “My arms and legs felt like rubber. I couldn’t eat, but could only drink thick fluids.” She had lost 20 pounds.

“Pam’s reaction was highly unusual,” Dr. Brodie explains. “Her form of malaria, vivax malaria, is typically not the most serious. But a small number of patients with vivax malaria may develop ARDS, and her case was extreme. She was very close to death.” The team’s use of ECMO to sustain Pam was the first known time it had been used for a patient with malaria. This application of ECMO was available at NYP/Columbia because he and Matthew Bacchetta, MD, Director of the Adult ECMO Program, had already developed a specialized program to treat adult patients with ARDS.

Today Pam considers herself fully recovered, with the exception of continuing joint pain. She credits the expertise and caring of her doctors, prayers from her family and community, and God in helping her to recover. Having missed her daughter Joy’s high school prom and graduation in May, she was thrilled to be able to walk down the aisle and dance with her son, Jimmy, at his wedding in August.

Pam Abma serves on the Board of Directors of Touch the World Ministries, which works with orphans and young adults traumatized by the civil war in Uganda. Her trip helped to establish a source of clean water and a health clinic for the community of Adak, Uganda.