Healthy Baby after Kidney Transplant and Another on the Way 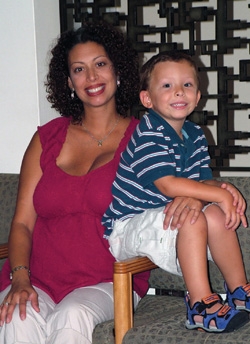 As a high school student, Fanny Powers suffered from recurring bladder infections and soon discovered that her kidneys weren't working properly. “I had none of the difficult symptoms associated with kidney failure, just low protein in my urine,” says Fanny. “But there was definitely something wrong.”

Fanny’s kidneys were not filtering toxins the way they should. For several years, she and her doctors at Columbia were able to manage the kidney disease effectively with medication. She completed high school, started college, and was moving through milestones of her young adult life.

By the time she was 23, however, Fanny was on dialysis and having a hard time with it. Her veins were small and hard to access. Her blood pressure rose after every treatment, and she often required hospitalization. Fanny was dangerously underweight, having dropped from 130 to 92 pounds. Life was put on hold.

At this point, the only alternative was a transplant. Thankfully, a kidney was available without waiting in the registry—Fanny's father was a match. “The transplant team at Columbia did such a fine job,” recalls Fanny.  “You can barely see my scar." It wasn’t long before she was back at Iona College, pursuing her studies in marketing and advertising.

When it came time to start her family at age 31, Fanny was concerned about her medical history. “I was told that transplant patients usually have their babies early and that these infants tend to weigh less,” she remembers. “My son, Luke, was an 8-pound baby, and very sturdy, though he came three weeks pre-term. My protein levels dropped a bit, but they returned to normal right after delivery.”

Fanny’s concern was not off-base. According to the National Kidney Foundation, compared with the general population, a transplant recipient is three times more likely to have a baby who is premature or low birth weight.

While it’s essential to work with your doctors as you plan for pregnancy, if your transplanted kidney is functioning well and medication doses are stable, pregnancy is overwhelmingly safe.

Excitingly, at 35, Fanny is now expecting her second child. "This has also been an easy pregnancy,” says Fanny. “I look back on those early years and can hardly remember what it felt like to be sick. My medical team at Columbia has helped me lead a rich and active life."