Cholangiocarcinoma is cancer located in one of the bile ducts, which carries bile from the liver to the small intestine. Bile duct cancer may occur anywhere in the ducts, either inside or outside the liver. Although they are slow growing, often they are not detected until in advanced stages when they block the bile duct and cause symptoms.

Also called biliary cancer, cholangiocarcinoma looks different under the microscope, often has different blood markers, and is treated differently than tumors originating in the liver tissue. 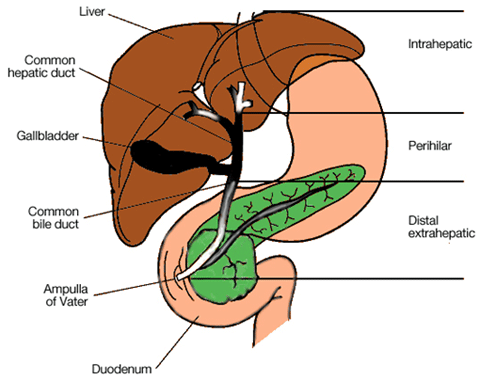 Cholangiocarcinoma is rare, occurring in only 2 out of 100,000 people. Risk factors include:

Treatments may include surgery, radiation therapy, and chemotherapy.

If found early enough that the tumor can be removed, surgery is curative. The bile duct and part of the liver may need to be removed.  If the tumor is blocking the bile duct, a small tube called a stent may be placed to allow bile to drain more easily to the intestine.

There are also local approaches to treat the tumor using endoscopic retrograde cholangiopancreatography (ERCP). During ERCP, an endoscope is inserted into the patient’s mouth and threaded into the bile ducts to relieve obstruction and to deliver various therapies, which may include photodynamic therapy (PDT) and local ablation.

CLDT is also one of only a few centers in the country that offers liver transplantation for selected patients with biliary cancers which are considered unresectable.

Radiation therapy is being piloted at several centers around the country including ours, and may include external beam radiation (SBRT, protons), and radiolabelled beads such as Y90. There are few data yet for these treatments in biliary cancers, but they are under active investigation. Similarly, there are few data yet for chemoembolization in this disease, but it is sometimes used.

Chemotherapy is the use of medication to destroy cancer cells. It is usually given intravenously but may be administered orally. If cholangiocarcinoma is advanced, the standard first-line treatment is a chemotherapy combination of gemcitabine and cisplatin. Side effects of these treatments include fatigue, lowering of the blood counts, occasionally kidney dysfunction and hair thinning.

Chemotherapy drugs may be given alone or in combination. Other commonly-used chemotherapy medications for cholangiocarcinoma include: 5FU, capecitabine, irinotecan and oxaliplatin.

Large randomized trials have not yet been completed to determine whether chemotherapy is effective in preventing recurrences after surgery to remove cholangiocarcinomas. Most centers base the treatment of biliary tumors from pancreatic cancer literature. Chemotherapy alone is often recommended, while chemotherapy and radiation is often used if there is a positive margin (cancerous cells remaining after surgery). Sometimes chemotherapy is administered for those with a positive margin, allowing time for the liver to regenerate, and surgery can be re-attempted in order to clear the margin.

Targeted agents under study include:

Patients with cholangiocarcinoma may be eligible for several trials currently underway at the Center for Liver Disease and Transplantation. See our current trials here.

About one percent of people have cancer in their gallbladders that is found incidentally (during testing for some other reason). In patients who are diagnosed with cancer of the gallbladder, it is very important to check the pathology of these tumors. Many patients need more extensive surgery with resection of part of the liver and hepatic lymph nodes. This has been shown to improve survival significantly.

Although gallbladder, intrahepatic, and extrahepatic biliary tumors all have slightly different genetic makeups, they are often “lumped” together in clinical trials of advanced disease because they are so rare.