What is pancreatic cancer?

Pancreatic cancer refers to tumors that start in the cells of the pancreas, an organ located behind your stomach that helps you digest food. Cancer develops when cells grow in an uncontrolled manner and form masses or tumors in the pancreas, instead of growing into healthy pancreatic tissue, which may also spread to other parts of the body. Tumors can interfere with the functions of the pancreas and cause pain and other symptoms.

What is a pancreatic tumor?

Normally, cells only divide to form new cells when the body needs them, and the body destroys old cells that are no longer functioning properly. Mutuations in cell DNA can cause cells to grow and divide uncontrollably, or may prevent old cells from dying when necessary. The reasons these mutations occur are still being researched, but it is known that the mutations can either be inherited or acquired during life. When extra cells accumulate and form a mass, it is called a tumor. Tumors can be benign or malignant.

What is the difference between a benign tumor and cancer?

If a tumor remains in one place and stops growing, it is considered benign. Benign tumors do not possess the ability to invade other tissues and organs. This is why benign tumors are not cancerous. However, they can cause health problems by placing pressure on nearby organs, blood vessels, or nerves.

If a tumor continues to spread, it is considered malignant – also called cancer. Malignant tumors are dangerous because they can spread to other organs and tissues. The process of spreading beyond the original organ is called metastasis: if a tumor has spread to other tissues or organs, it is called metastatic (it has metastasized to other locations).  Physicians assign the cancer a stage depending on how wide it has spread.

What are exocrine tumors?

The information on this site refers mostly to exocrine tumors, and specifically pancreatic adenocarcinoma. 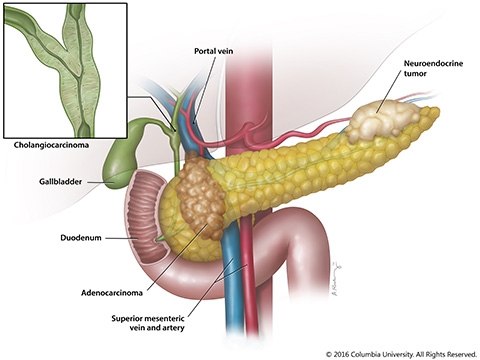 What are endocrine tumors?

Endocrine tumors are cancers that originate in the hormone-producing cells of the pancreas,* the islet of Langerhans cells. Because endocrine tumors begin in cells that produce hormones, the tumors themselves may produce hormones that cause symptoms in addition to the problems caused by the presence of an abnormal mass.

*Note: Endocrine tumors may also form in hormone-producing cells in other parts of the body such as the adrenal gland, thyroid, parathyroid, pituitary gland, lung and gastrointestinal tract.

Insulinomas arise from the islet cells of the pancreas and produce excessive amounts of insulin, resulting in low blood sugar. Typically small and noninvasive, these tumors are benign 90% of the time.

Diagnosis for this disorder requires observation of insulin level as it relates to blood sugar level. A low blood sugar level combined with a high insulin level confirms the diagnosis that an insulinoma exists. After diagnosis, the next step is localization of the tumor, accomplished using imaging studies including CT, MRI, octreotide scanning (injection of radioisotope into the vein and subsequent scanning to record the radiation given off by the radioisotope), and ultrasound. However, in some patients, these imaging techniques are unable to localize the tumor. In these cases, attempts to locate the lesion are performed by experienced endocrine surgeons during an operation and are successful in the majority of patients.

Treatment for an insulinoma usually includes surgical removal of the tumor. Because these tumors are often small and benign, this surgery is curative. Larger tumors may require removal of part of the pancreas depending on location.

Nonfunctional neuroendocrine tumors represent about 40% of all tumors affecting the islet cells. These tumors are termed nonfunctional or clinically silent because they do not produce excessive hormones. They are slow growing and may be very large by the time of diagnosis. About half of these tumors are malignant.

The most common diagnostic tests employed for these tumors are CT scans, octreotide scans, and pancreatic polypeptide/chromogranin level tests. CT scans are most often used to evaluate the tumor in order to demonstrate its location within the pancreas and screen for spread of the disease to the liver. Octreotide scans are performed preoperatively to identify visible tumors and again postoperatively to screen for recurrence of disease. Octreotide scanning involves injection of radioisotope into a vein, and subsequent scanning to identify sites of concentration. Because blood levels of pancreatic polypeptide and chromogranin are elevated in approximately 90% of patients with nonfunctional neuroendocrine tumors, physicians monitor these levels to evaluate patients for recurrence of disease as well.

If you or someone you care for is dealing with a pancreatic condition, the Pancreas Center is here for you. Whether you need a diagnosis, treatment, or a second opinion, we have an entire team of experts ready to help.

To keep learning about pancreatic cancer: