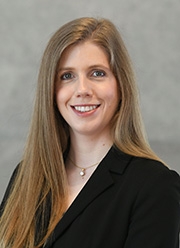 Lauren Nicolosi is certified by the American Nurse Credentialing Center as an Adult-Gerontology Nurse Practitioner. She received her Master of Science degree from Hunter College Bellevue School of Nursing in New York, NY where she was named Valedictorian and received the Dean’s Award. Previously, she received a Bachelor of Science Degree in Nursing from Boston College William F. Connell School of Nursing in Chestnut Hill, Massachusetts.

Lauren began her nursing career in 2012 as a registered nurse on the Liver Medicine and Solid Organ Transplant Unit at Yale-New Haven Hospital in Connecticut, working directly with acutely ill patients with liver disease, as well as those who have received solid organ transplants. During her time there, she completed the Yale-New Haven Hospital Nurse Residency Program, which is accredited by the American Nurses Credentialing Center.

In 2014, Lauren started at New York-Presbyterian Hospital as a registered nurse on the Comprehensive Solid Organ Transplant Unit, where she worked directly with acutely ill post-transplant patients. Over the next few years, she moved up the hospital’s clinical ladder program and was ultimately promoted to CN III, a charge nurse position and lead preceptor for newly hired nurses. She completed many performance improvement projects during this time, focusing on quality improvement using evidence based practice and research. She has presented her data at multiple conferences across the country, including at UCLA’s Annual Research and Evidence-Based Practice Conference and at NYP’s Research, Evidence-Based Practice (EBP) & Innovation Symposium.

As of September 2020, Lauren has been working at Columbia University’s Center for Liver Disease and Transplantation as an outpatient hepatology nurse practitioner. She sees patients with chronic liver disease as well as those who have received liver transplants.

Visit The Center for Liver Disease and Transplantation at columbiasurgery.org/liver