Your doctor has just informed you that you have carotid artery stenosis. Now what?

According to Nicholas J. Morrissey, MD, FACS, Associate Professor of Surgery in the Division of Vascular Surgery since 2003, the most important thing to do is to not panic. Instead, he advises, patients should find an experienced cardiac or vascular physician who can monitor your condition now and in the years to come.

First, the basics. Carotid stenosis (also called carotid occlusive disease) is narrowing of the carotid artery caused by atherosclerotic plaque of plaque in the carotid arteries, the same process that causes atherosclerosis in the heart when plaque accumulates in the coronary arteries. In many cases, heart disease is diagnosed first, and patients later learn that atherosclerotic plaques are located in their carotid arteries as well as their heart. The risk factors for carotid disease are the same as for heart disease: age, high cholesterol, high blood pressure, smoking, sedentary lifestyle, obesity, diabetes, and male gender. Many patients exhibit no symptoms.

A cause for concern 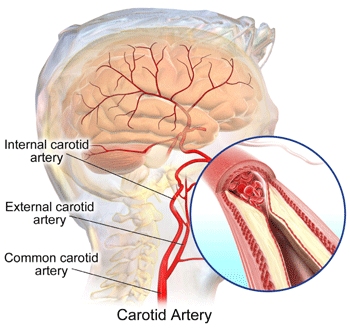 It is important to take carotid stenosis seriously. Stroke (blockage or bursting of a blood vessel in the brain) is the third leading cause of death in the United States, and is the main cause of long-term disability. Although most strokes result from plaques in the coronary arteries, about 15-20% occur when pieces of plaque dislodge from the carotid artery and travel to the brain. One of the most important warning signs of stroke is a transient ischemic attack or mini-stroke (TIA), which may cause symptoms such as blurred vision or loss of vision; weakness on one side of the face or body; slurring of speech, dizziness, and swallowing difficulties. Most patients who suffer a stroke have had no prior symptoms. Therefore, a diagnosis of carotid stenosis should be considered an important wake-up call.

A cause for calm

While patients should take a diagnosis of carotid stenosis seriously, they should nevertheless not panic, says Dr. Morrissey. Instead, he advises his patients to view it as an opportunity to change their health before it is too late. The fact is, over 90% of his patients never have surgery. Instead, most patients are successfully managed with medications to prevent the progression of plaque and to prevent stroke, lifestyle changes to reduce risk factors, and regular, careful monitoring with ultrasound.

Regular follow-up care and monitoring is a cornerstone of properly managing carotid stenosis. According to Dr. Morrissey, centers such as NewYork-Presbyterian/Columbia are “worth their weight in gold” because of the quality of their ultrasound laboratories. He explains, “Many of my patients have been told at other hospitals they need surgery, based on tests that show a certain level of blockage. Seventy percent of these patients do not need surgery.”

The discrepancy is sometimes caused by the use of magnetic resonance or magnetic resonance angiogram (MR or MRA), which is used in many hospitals, but which frequently overestimates the percentage of blockages. Although MR/MRA is considered a ‘higher-end’ test than ultrasound, it is more error-prone than high quality ultrasound, explains Dr. Morrissey. As a result, the Division of Vascular Surgery relies most frequently on ultrasound instead. Carotid angiography, in which a catheter is threaded through a blood vessel in the arm or leg to the neck, is effective but is used less often then in the past because it is invasive. “Each method of imaging may have a role in management of carotid disease, but the initial test — and often the only needed study — should be a high quality carotid ultrasound,” says Dr. Morrissey.

The following lifestyle changes can help to prevent progression of carotid artery disease:

Although these measures may not necessarily cure carotid artery disease, they are critical in stabilizing it.

Until fairly recently, surgeons have often performed procedures to remove carotid plaques if a blockage reached 60% or higher. Dr. Morrissey and many other surgeons now consider surgery only when a blockage reaches 80% or more if there are no symptoms. In patients with symptoms, intervention can be considered in patients with as little as 50% blockage. Carotid endarterectomy, in which surgeons make an incision in the neck and surgically remove the plaque from the inner lining of the carotid artery, is the most commonly performed procedure. Stenting, or the placement of a thin tube to keep the artery open, is appropriate for patients who are unable to undergo surgery due to very high surgical risk.

While surgical procedures are effective in treating carotid stenosis, medical management combined with lifestyle modifications is the optimal approach in the vast majority of patients, says Dr. Morrissey. His primary advice: “Don’t panic. Take the opportunity to establish care with a practitioner who can work with you for life.”

The Division of Vascular Surgery is available to provide second opinions to patients who have received a diagnosis of carotid artery disease or other vascular disease. Call 212.342.2929 or visit columbiasurgery.org for more information. 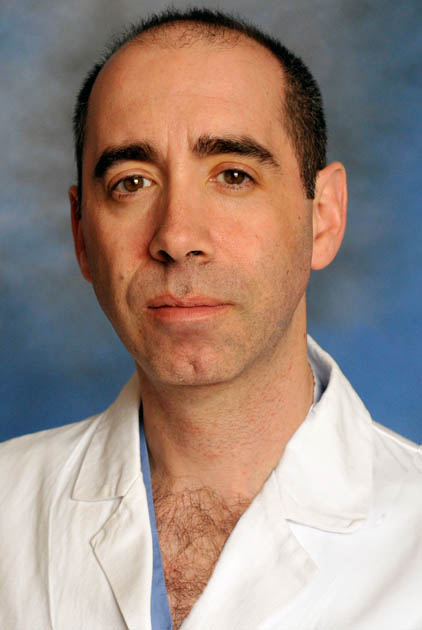