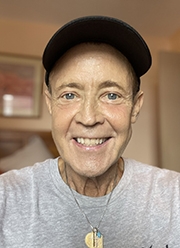 Jerry Cahill has always been a positive person. Diagnosed with cystic fibrosis (CF) at age 10, he’s advocated for his own health and reinvented himself through each challenge ever since. As an athlete, coach, mentor, and CF ambassador, he’s dedicated his life to empowering others to succeed. Now 65 years old, Jerry is decades beyond the median survival rate for CF patients.

That’s why when Jerry went in for a kidney-liver transplant this summer, for the first time in his life, he wondered: “Am I going to make it through this?” 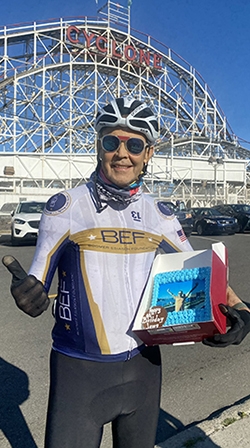 Nine years ago, Jerry received a double-lung transplant at Columbia and impressed doctors and friends with his remarkable recovery. But as he explains, “with cystic fibrosis, and then with the transplant, you kind of trade one set of problems for the other.”

His liver enzymes had been running high since even before the lung transplant, and he had a history of elevated creatinine levels and treatment for water retention. In recent years, Jerry had met with both liver and kidney transplant teams as a precaution.

Then, as Jerry was preparing for his annual Bike 2 Breathe fundraising benefitting the Boomer Esiason Foundation, he began to rapidly gain water weight. “I was trying to bike, and it was impossible,” he remembers. Jerry pushed through the final leg of the race, ending at Coney Island, where the support team took him straight to the hospital.

As Sick As It Gets

“I just thought I was going for a few days. They would monitor me and give me diuretics and clear out the water,” says Jerry. “Unbeknownst to me, my kidneys were failing.” At some point, he blacked out. When he woke up days later, he was on 24/7 dialysis in the ICU.

Jerry needed a kidney transplant but he had an infection and would have to clear his fever before he could be approved for the transplant list.

Infectious risk is one of the biggest challenges in a case like Jerry’s. “People with cystic fibrosis get lots of infections,” says Joshua Weiner, MD, kidney and pancreas transplant surgeon. “And Jerry has had pretty persistent infections that even without a huge amount of immunosuppression have been really difficult to clear.”

A transplant surgery throws even more immunosuppression on top of the existing condition, increasing infection risk and making it even harder to fight persistent infections. Then, while Jerry was fighting his fever, waiting to get the okay for the kidney transplant list, his liver began to fail.

“Just bluntly, it was shot,” he says. Jerry was quickly approved for a liver transplant, but would still have to wait until the kidney team cleared him, and then until a single donor with a viable kidney and liver was available. In the meantime, doctors told him, he should plan on living at the hospital.

Jerry couldn’t believe it. He knew he was sick, yet kept thinking, “It’s not that bad.” But he was as sick as it gets. The Model for End-Stage Liver Disease (MELD) score, a prognostic scale used to predict 3-month mortality due to liver disease, ranges from 6 to 40; the higher the score, the greater the 3-month mortality.

Finally, on July 22nd, after 15 days without fever, he was cleared for the kidney transplant list. At that point, Jerry was back on the transplant floor receiving dialysis every other day. Would it be days, months until he got the call? He didn’t know.

Never one to just sit back and wait, Jerry immediately started making a plan for his ongoing hospital stay. “I thought to myself, they always say if you're going to go into transplant or any surgery, the better shape you're in, the better you'll recover…well, I’ve got a month or so. I’ll get in shape.” He had a stationary bike delivered to his room.

But just hours after Jerry was put on the kidney transplant list, a physician’s assistant gave him the news: they had a donor. “A donor for what?” he asked. He couldn’t believe things were moving so quickly and worried that he wasn’t strong enough.

Tomoaki Kato, MD, liver transplant surgeon and Chief of the Division of Abdominal Organ Transplantation, says Jerry was actually “in the best possible shape considering how sick he was before.” The fact that he beat the infection he had while hospitalized was “in a way miraculous.” A miracle Dr. Kato credits to the excellent care he received in the ICU, and Jerry’s unique physical strength and positive attitude.

“[Jerry is] such an extraordinary guy,” says Dr. Weiner. Not only did his previous transplant experience help him, but he also “just seemed like a fighter, and was determined to overcome it.”

Jerry’s survival depended on a kidney-liver double transplant, and recovery wouldn’t be easy. But his indomitable spirit convinced doctors that it was worth the risk.

“Born to Be Alive”

Only in the quiet of the surgical holding area, right before being wheeled into the OR, did Jerry feel pings of doubt. His advocacy work centers on the slogan “You Cannot Fail,” and Jerry works tirelessly to empower people to “discover and embrace their own heroism to meet life’s challenges.” But this challenge was entirely new, says Jerry. “I thought, my god, am I going to get through this?”

In a collaborative surgery lasting over fifteen hours—long, but "not excessively long for us,” says Dr. Kato—Dr. Kato transplanted the liver first. Once the liver was in, vessels were connected and functioning, Dr. Weiner could transplant the kidney. Everything went according to plan.

As for Jerry, he woke up from surgery and was off the breathing tube within six hours. In true Jerry fashion, his loved ones were amazed at how quickly he was alert and doing well.

“His recovery is remarkable,” says Dr. Kato. “Sometimes patients go into the ICU for a long time and end up needing multiple medical or surgical procedures to recover. He didn’t need those. That speaks for his physical strengths.” 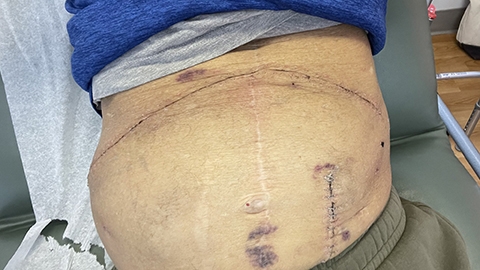 The theme of the Bike 2 Breathe event this year, in honor of Jerry’s birthday, was “Born to be Alive”—alive at 65 with cystic fibrosis, a condition with a 47-year median survival rate.

“The irony of it all,” says Jerry, “is here I was, almost at death’s door.” While his medical team credits Jerry’s strength of body and character, Jerry credits “the love and support that I've received from everybody at Columbia and NewYork-Presbyterian, from the surgeons to my transplant coordinators, to my transplant doctors and the people on the floor, the nurses and the staff.” 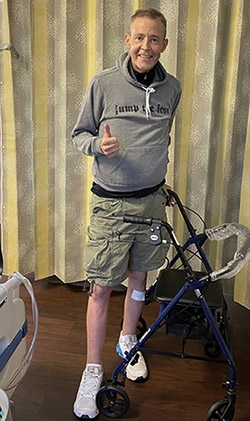 Above all, Jerry is grateful to the donor family that made his transplant possible. “Nobody has to donate their organs, but the fact that they did is just unconditional love,” says Jerry. “I have to acknowledge it and try to really preserve this gift that they've given me.”

Now two months post-surgery, Jerry is steadily recovering, spending ample time on his stationary bike and outdoors, and grateful for every minute. He’s already planning his next program with the Boomer Esiason Foundation: Hike 4 Health, Hike 2 Breathe. “It doesn’t matter whether you’re walking on a flat surface or up and down hills,” says Jerry. “Just getting outside and moving your body will make you feel good.”

With a health journey like Jerry’s, every day feels empowering. And his zest for life is nothing short of contagious. As Jerry says, “Life is about reinventing yourself.”