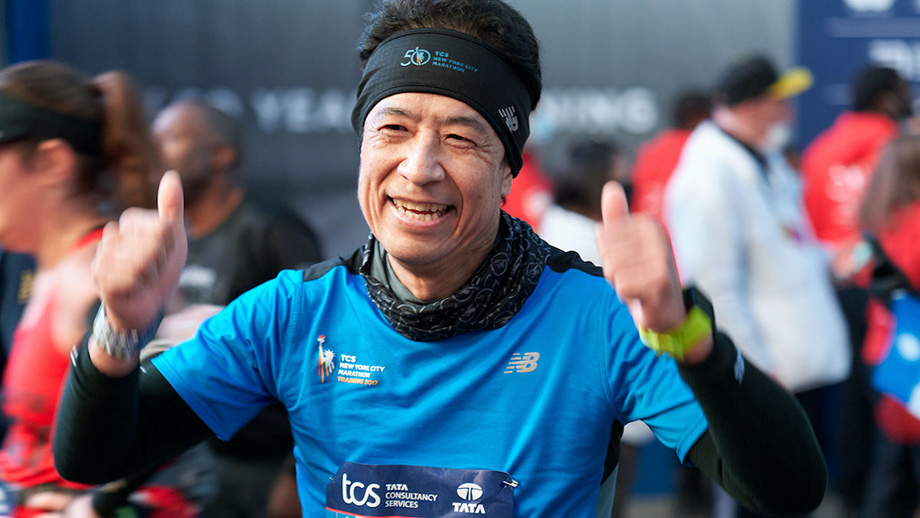 For years, Tomoaki Kato’s colleagues have marveled at his endurance—both in the operating room, where he regularly performs 10-hour surgeries, and outside, as an avid runner who has completed seven New York City Marathons.

But completing his eighth New York City Marathon on Nov. 7 was about much more than his finishing time. Twenty months ago, Tomoaki Kato, MD, the Edwin C. and Anne K. Weiskopf Professor of Surgical Oncology at Columbia University Vagelos College of Physicians and Surgeons and chief of abdominal organ transplantation at Columbia University Irving Medical Center/NewYork-Presbyterian, was facing multiorgan failure as he battled COVID-19.

On that brisk fall day, as he stood in New York City’s Central Park, he soaked in another moment in his remarkable journey to recovery. Looking down at his newest medal, he reflected, “This is special, because I may not have been here. … I’m just so happy I was able to finish.”

In mid-March of 2020, Kato began to experience severe pain in his back. The pandemic was starting to overwhelm the city, but “I was in a denial to be honest,” he remembers about the possibility that he might have contracted COVID-19. At the insistence of a colleague, he went to the hospital to get tested for COVID-19. The test came back positive.

Kato stayed home and monitored his oxygen levels. One day when he found himself struggling to breathe, he knew he had to go to the emergency department at Columbia University Irving Medical Center/NewYork-Presbyterian.

“When we first laid our eyes on him, it was shocking because he looked much sicker than what we anticipated,” says Marcus Pereira, MD, medical director of the Transplant Infectious Diseases Program at Columbia/NewYork-Presbyterian and assistant professor of medicine at Columbia's Vagelos College of Physicians and Surgeons. “He was breathing very fast. He looked exhausted.”

Within 24 hours, Kato’s condition had worsened and his care team decided that he needed to be put on a ventilator to help him breath. While sedated, Kato says he had very vivid dreams and at one point, “I saw a white light. The white light came from far away and then suddenly surrounded me. I remember I felt I died,” he says.

After a harrowing few weeks in which Kato battled multiple infections and had to be put on ECMO, an extracorporeal membrane oxygenation machine that pumps blood and oxygen through the body, his condition began to improve.

Under the care of his colleagues and friends, Kato pulled through and began to build back his strength. Two months after being admitted to the hospital, he was discharged to the cheers of hundreds of people.

He then astonished those same colleagues when he came back to work in August of 2020 and started performing surgeries again. Not long after, he began running, with the goal of entering the 2021 New York City Marathon.

“For me, it is almost a miracle that I was able to come back to do surgery at a regular pace,” he says. “But the marathon was something I was able to do before COVID, so I really felt like if I can do this, then I can sort of put some closure on this COVID story.”

Celebration at the finish line

At the 2021 New York City Marathon, Kato said he started a little too fast, which slowed him down at the end, but he still crossed the finish line in 5:38:52. Kato exhibited perseverance and endurance with his run, but the moment was also a tribute to everyone who rooted for him along the way.

“For me to be able to do this, I really feel like I’m back to what I was before,” Kato says. “I didn’t get defeated by COVID. I’m so grateful that I was able to come back and so thankful to my colleagues who helped me along the way.”

“He does these marathon surgeries that nobody else can do. His endurance, his dedication to his patients—this is what he’s well known for,” says Mercedes Martinez, MD, medical director of the Intestinal Transplant Program at the Center for Liver Disease and Abdominal Transplantation at Columbia University Irving Medical Center/NewYork-Presbyterian and professor of pediatrics and medicine at Columbia's Vagelos College of Physicians and Surgeons. “Even though he was sick, he didn’t lose any of it. And now completing this marathon—it is really incredible. He is really extraordinary.”

This year’s marathon marked not only Kato’s comeback, but also that of New York City’s as it recovers from the devastation of the pandemic. As a patient, Kato missed many of the 7 p.m. salutes to the health care workers at the height of the pandemic, but he was able to enjoy the cheers as he crossed the finish line. “It was the 50th anniversary of the marathon and a celebration of New York City coming back from the pandemic,” says Kato. “It’s wonderful to celebrate together.”