Forget the Do and Do Not Lists: Talking about Cancer is Personal 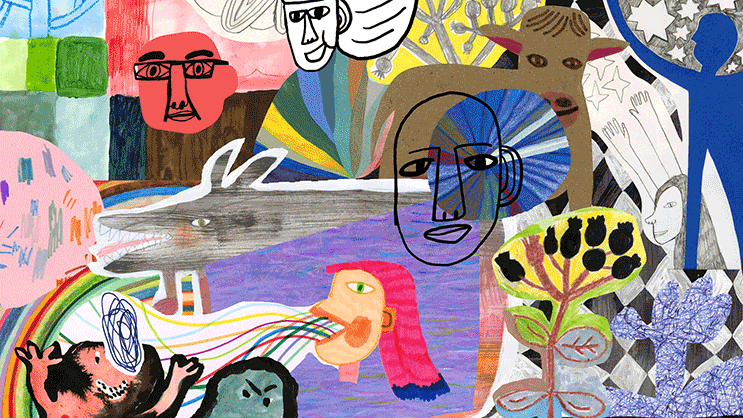 Talking with a loved one about cancer isn’t black and white. There are no simple checklists to follow or talking points to hit. You may feel uncomfortable or unsure of what to say, and that’s okay.

Instead of retreating, take a moment, breathe, and acknowledge your feelings. In this conversation, Ian Sadler, PhD, psychologist and psychosocial oncology specialist at the Pancreas Center, discusses how to use everyday relationship skills to be the supportive friend and family member you want to be.

There are so many resources and lists of “what to say to someone with cancer and what not to say.” But it’s so much more nuanced of a thing than that, isn’t it?

Absolutely. You have to gauge it, right? It’s a very personal thing. There are some patients that don’t mind questions. But then there are patients who will say to me, “I wish people would stop asking me how I’m doing. You know, cancer doesn't define me. I feel like it’s just constantly, ‘how are you, is everything ok?’”

And it's really interesting because research shows that when people are overly solicitous—and by that I mean, “how are you, is everything okay?”—that actually can generate distress.

Yeah, I think it probably would for me, at least sometimes. Even just a change in a close relationship dynamic that is now centered around ‘something’ out of my control.

That's exactly right. And that's why I think one of the best things to do, and most people don't do this by the way, is to ask.

Say, “I'm here for you. I care about you. The last thing I want to do is annoy you. So, can you let me know when you think I'm asking too much? Let me know if you feel I am contacting you or texting you too much.” You look to the person for guidance, use their cues. Try to take notice.

The hard part is a lot of people often end up not knowing what to do or say, so they actually avoid the person. And then I have patients tell me, “I’ve lost friends.” And I say “You know, I don’t think it’s a case of having lost friends. People sometimes withdraw when they don't know what to do. They don’t know what to say.”

Really, a lot of times it’s their anxiety, their distress, their discomfort. If you are someone with a family member that has cancer, it is important to gauge them, to reach out, to listen, to ask, to say “I’m calling to check-in, what's going on?” It doesn’t have to be “how was your chemotherapy?”

It kind of sounds like you’re saying “take the pressure off yourself.” You don’t have to overtly ‘provide’ something so much.

Yes, yes. You know, your first thing is right: it’s nuanced. There is a site I like because I think it kind of looks at it from this perspective: cancer.net. But here’s my concern, you read something, you know, “don’t say this, say this.” You have to use that as a guide, not be wedded to it, because if you go mechanical people are going to feel it. Here’s one of the things that people say a lot and they think is fine, but it’s actually horrible: “Don’t worry.”

That’s the worst thing you can say to someone. Because guess what, it’s okay to worry! And listen, physicians say this, well-meaning people. It’s not coming from a place of mean-spiritedness. But telling someone not to worry is such a harsh thing, believe it or not. People don’t even realize they’re being harsh, but “don’t worry” can really cause someone to get anxious because when you’re talking to them they are scared as heck.

So be supportive, be compassionate, but be aware. If you feel awkward, let them know! Say, “Listen, I’m feeling a little uncomfortable and the last thing I want to do is generate discomfort in you. So, I really hope you can tell me if you feel sometimes I am asking you too much, or I’m probing you too much. Let me know. I'm not going to stop calling you because you told me.”

It’s important to be very diplomatic. You have to give them the power. You have to almost cede control to them, because if you think about it, someone with a cancer diagnosis—the first thing they feel is out of control—that they’re powerless, they're helpless. You could give them contro by something as simple as this: “Listen, I'm going to call you and check in on you. But you get to tell me if it's too much, or you get to not respond to my texts sometimes if you don't feel like it. I just need you to know I'm there for you, and I love you.”

Another thing is: do something. “I want to bring a meal over” or “Can I take you out to dinner?” Sometimes you don’t need to be talking about it. You can say, “I'm thinking about you. It's not about talking about this, but do you want to go to dinner? Let's have a nice night.”

I'm sure that's something that doesn't happen as much as it should.

It doesn’t. You know, in the majority of cases it’s people coming from a place of fear of not knowing what to do, then, unfortunately, they start to withdraw from the person. And that’s the worst thing to do when the person is actually looking for support. Then here’s another challenge: if you're too supportive, that’s annoying.

Oh, I could see that. You know, starting to feel a little othered when someone treats you differently. Even if it's a lot of attention, that can feel odd.

Wow. Is it because they’re drawing more attention to it? A psychological response? Or just being annoyed makes everything worse?

Both! Partially that, and partially irritability. You know, when it’s too much, what do you say? You fib, you say, “Oh I’m fine. I’m okay.” And I think that causes the person with the pain to be more irritable, and we know that mood affects pain. I don’t know the exact causation piece, but it’s multifactorial. It’s bringing attention to it, and it’s potentially reinforcing the sick rule. So, “How are you? Are you okay?” – “I’m good.” But I’m hurting, my back is hurting more.

I think the bottom line is, when you have someone in your life who has a disease, cancer, whatever it may be, you have to be careful with being over the top, with asking and checking in. Again, it’s nuanced.

Another common one? Saying things like “I know how you feel.”

Right, when you don't!

No, you really don’t.

So, taking that extra second to consider what you’re about to say is so important. Because you're just trying to say “I love you,” but it’s coming out all wrong.

That’s such a good point. You want to say, “You know, I really care about you, and I’m thinking about you,” but what comes out is, “I know someone who's going through this as well.” I have patients tell me people say “Oh my gosh, my family member had this [cancer] and they passed away a few years ago.” And again, I don't think there are any bad intentions with people doing this, but they don't realize the impact of their words.

Do you think that this also has to do with people, with us in general, sort of not being very good communicators in our daily lives? Or not being very intuitive or empathetic?

Yes, yes, yes, yes, and being somewhat self-centered. I want to be careful here; I don’t want to over-pathologize, but I think that’s part of it, without overstating it. And sometimes it’s their own anxiety, so they’re feeling anxious and that’s what is coming out. It’s people’s inability to manage their own distress in the face of someone else’s.

A good thing to do is to be aware of yourself, be mindful. If you're feeling anxious, don't call your friend. Do something to settle yourself, calm yourself. Talk to yourself before the call, take a walk—this is not about fixing or solving something, just let them know that you care. You have to find your own language to let the person know that you're there for them.

All of this sounds so applicable to relationships in general. It’s such useful advice: listen, speak, and act with thoughtfulness.

It is! You’re absolutely right. We in general, myself included, are not perfect communicators. We say things without thinking. We are impulsive, and it really comes from anxiety, at the core.

You run into a friend who’s got a cancer diagnosis, and you just feel so many things and then say something like, “Oh my God, how are you?”

Oh, I have done that! And felt bad as soon as it came out of my mouth.

Oh yeah, I’m sure I have too. You know if you screw up and you realize it after the fact, call them and say “I just want to be honest with you. I was really torn and I think I may have said things that weren’t helpful on the phone. I just need you to know I'm sorry, and I love you, and I'm going to do better. And please know I'm thinking about you.”

Sometimes you will say the wrong thing. We're all human, we are flawed, and we're all trying our best. The important thing is just not to repeat it incessantly. And you might do it again, you know, part of our culture is “how are you?” Right?

I'll go to the waiting room and get a patient sometimes and say “how are you?” and I’ll get a “not great.” And I’ll say, “That wasn’t a great question was it?” And I own it. We’re dancing with this. We’re just trying the best we can to not cause further distress and realizing that sometimes we will.

Even a psychologist, a trained social worker, a psychiatrist will say things and then be like, “Oh my god, I can't believe I said that.” What I try to do if that happens, and that has happened, is exactly what I’ve described— Very directly say, “You know what? I just said to you that I understand, and I don't. I might understand more than most people because of what I do, but I can't fully understand even though I talk with people every day about this.”

I have no problem with apology. And that's always a comforting thing to the person. If you do say something or you feel like you may have, just say “I think I may have said something last night and I'm sorry.” Sometimes it’s just that simple.

As Dr. Sadler explains, all that emotional nuance can’t easily be distilled into a list of what to say and what not to say —It’s hard being human, and sometimes anxiety can get the best of us. Still, there are a few general principles to keep in mind that can always help guide us in these difficult conversations: