Gratefulness, Relief, and a New Challenge: Large-Scale Vaccination Efforts at the Armory Draws Us All Closer 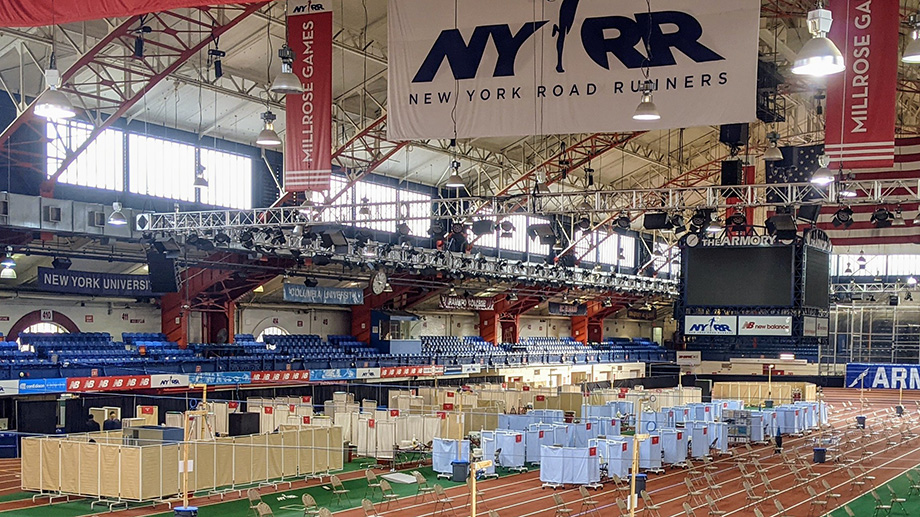 Noah Landguth is accustomed to long, grueling workdays. He is used to sleeping on the ground camped out in the wilderness, rising at dawn for another day of fighting wildfires. For six months of the year, Landguth travels the western states, deployed for two weeks at a time as a wildland firefighter.

For the past few months, however, he has been in New York City helping combat a different crisis: Covid-19. Specifically, by helping at the vast vaccination operation by New-York Presbyterian/Columbia at the Armory Track in Washington Heights.

“One of my friends was like, ‘Hey, there's this company looking for medical personnel, specifically in the seasonal work community. They need people to come out to New York City to help relieve some pressure off the hospital system by giving vaccinations,” said Landguth. “So I ended up calling. Three days later I was on a plane.”

For Landguth, coming to the East Coast was a whole new experience beyond just working in a healthcare setting.

“The first day, I flew into JFK, and to be honest, I was pretty nervous coming into the city,” said Landguth. “It was my first time here and I've heard so much about New York City. You always see it in movies and stuff like that. So it was almost like this fictional land to me. Driving through the city and just seeing it with my own eyes—it was just kind of a surreal feeling.”

On his first day on the job at the Armory, Landguth was struck by how seamlessly everything seemed to run.

“You could have a huge line, but it would take like 10 minutes for them to all get through. We probably had 30, possibly 40 vaccination little areas. It was almost like a factory, so it was all really compartmentalized. We'd give them the little spiel, give them the shot, and then they head out on their way,” said Landguth.

The Armory is a 65,000-square foot indoor track and field complex that holds, according to New York-Presbyterian, up to 70 vaccine stations to accommodate as many eligible patients as possible.

Landguth is but one of many volunteers recruited to help aid the vaccination effort. Another of his fellow wildland firefighters, Joe Lorenz, also made the trip to New York. 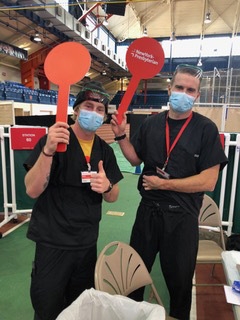 “It was definitely exciting, especially just coming the day after they called me and just getting right into it, I'm living here in Washington Heights,” said Mr. Lorenz.

No stranger to long days requiring intense focus and physical activity, Lorenz expected a similar rigor at the Armory.

“There's a high volume, so you do have to make sure you have the right patient, right dose. Not only do you have to do that, but you’ve got to do it every 10 minutes,” said Lorenz. “So I do remember being like, ‘Wow, these are going to be long days, a lot of focus,’ but you start to relax. The first day was surprising to see how many people were moving through and how efficient it was really, which is nice. Makes my job pretty easy.”

For Landguth, the volume of patients on a day to day was also a new challenge.

“I was working six days a week, 12 hours a day. So it was just maintaining that, trying to give the best care to each individual person as if they were the only person that I interacted with that day even though I was seeing people constantly, day in and day out.”

On the busiest day, Mr. Lorenz estimates he vaccinated about 80 to 90 patients. Most were fairly knowledgeable on the vaccine.

“They'd read a lot of things on the internet, but they just want someone who's in scrubs to reassure them,” said Lorenz.

While the vaccination efforts at the Armory are going smoothly on-site, the process to get patients enrolled has been filled with some difficulties.

“The biggest complaint from patients was there wasn't a lot of transparency as to when they would release a flood of open appointments. So I talked to quite a few older folks who were doing some crazy refreshing on the page at crazy hours, waking up at 2:00 AM, waking up at 4:00 AM,” said Lorenz. 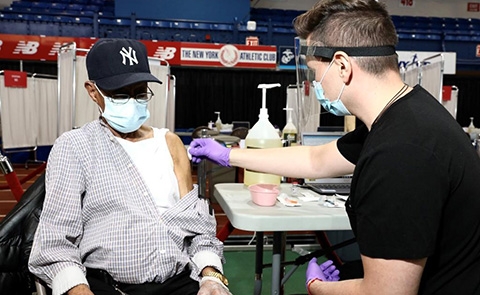 As more and more vaccination sites have opened up across the city, finding an appointment has become less arduous. Patients who sign up for Connect can receive notifications about appointment updates at the Armory. Beginning January 27, The Armory became a vaccination site for New York City residents only. A minimum of 60 percent of vaccination appointments are reserved for eligible residents of the Washington Heights, Inwood, Northern and Central Harlem, and South Bronx communities.

Such a vast operation requires a multitude of volunteers. “I'd say there's probably 35 to 40 volunteers and 50 vaccinators on any given day,” said Lorenz. “There's about 20 of us through the staffing agency that I came with, which are EMTs and a lot of Wildland Fire people.”

Mr. Lorenz recalls one day being stationed with Landguth at the vaccination table next to Dr. Craig Smith, cardiothoracic surgeon and Surgeon-in-Chief at New-York Presbyterian Columbia.

During the height of the first Covid-19 wave in NYC, Dr. Smith wrote daily letters to his staff, which ran the gamut from personal stories from the frontlines, updates on epidemiological statistics, to meditations on history. Described as “Winston Churchill’s radio speeches of this war,” Dr. Smith’s emails became widely popular amongst public readers—a source of hope and inspiration in the darkest moments of the pandemic.

“It was a little slower that morning, so we talked. We actually talked about a lot of different stuff,” said Lorenz. “I talked about Wildland Fire. We learned a little bit about different heart surgeries that he does and what they use, stuff like that...different valves that he works on. I didn't really know that there were physicians coming in like that, Because he just sat down next to us, and we were like, ‘Hey, what's going on?’”

For Dr. Smith, the volunteer readiness he has seen in response to the need at the Armory vaccination site is nothing short of staggering.

“Very early in the process, when they were setting it up and they realized they needed a lot more vaccinators, they asked the Columbia side to help and put out a request for volunteers. And, overnight they got 840. They were flooded with volunteers. They had to shut the site down,” said Dr. Smith.

Just like for Lorenz and Landguth, volunteering at the Armory vaccination site has provided Dr. Smith with some new, refreshing challenges.

“Well, for me it was interesting to do something new. It's been so long since I've done anything in medicine that I'm not completely comfortable with,” said Dr. Smith. “Us old guys and not-even-so-old guys, we're pretty well in a groove after five, or ten years. There’s not too much that's totally new like that put on to your plate.

One of the most character-building parts of being a resident, for me, was doing things like starting IVs, because that's not a trivial skill. We started IVs all the time. And now, they have teams who do that, but it has something in common with [giving vaccines] in that you're sitting there with an awake patient, and you're going to cause them some pain, and you have to get their confidence and help them calm down.”

In addition to physicians, employees from across New-York Presbyterian/Columbia showed up to volunteer in the vaccination efforts. Elizabeth Wist-Weir, a cardiothoracic physician’s assistant, has found the experience unforgettable and filled with emotion.

“The excitement and positive attitude of everyone I saw that day was extremely refreshing! There was a 92-year-old woman brought in by her grandchildren with tears in her eyes, a couple who held hands as they received the vaccine simultaneously, a physician who was in practice for 45 years vaccinating others. Every patient was grateful to get a vaccine and grateful to me for vaccinating them. They were so appreciative and thankful,” said Wist-Weir. 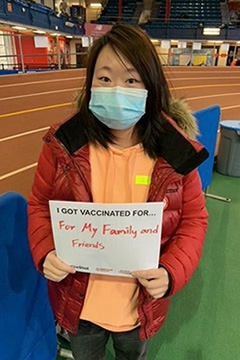 For Barbara Thornton, an administrative manager in the department of surgery, the volunteer opportunity was a chance to jump into something clinical and give back to the community.

“When I realized they needed personnel for roles that did not require qualifications to vaccinate, I knew I wanted to contribute. I am incredibly grateful to have been given the opportunity to be vaccinated myself in late December. My husband is an anesthesiologist here and has been performing his usual clinical work, in the direst of circumstances, since the pandemic started. How could I not offer to do this?” said Thornton.

Hope for the future, a return to normalcy where they can hug their loved ones without fear—that is what all of these volunteers are fighting for each day. Gathered from near and far, they continue the vaccination efforts from 7 am to 9 pm, seven days a week at the Armory.

Even as temporary volunteers, like the Wildland firefighters, move on to their next assignments, they depart knowing they’ve left an indelible mark on the lives of their patients. As for where Lorenz and Landguth are headed next, it’s a couple of months of rest with loved ones then back west for another season of firefighting.

“Pretty much just prepare,” said Landguth, about the upcoming months. “Get mentally and physically ready for the fire season, which starts up in May. So lots of hiking with heavyweights. Anything that is challenging and makes you suffer a little bit. That's pretty much what the whole summer looks like 14 days on 16 hours a day, two days off, going back to it. 98% of every waking hour we're working.”

When asked if he felt like he just got a taste of medical residency working similar hours helping vaccinate hundreds of patients, Landguth laughs.

“Oh my gosh. Really, the people that came through were incredibly kind and treated me with the utmost respect. I think the people that I interacted with are going to be the thing that I remember most.”

Information about registration and sign-up can be found at VaccineTogetherNY.