The Overnight Birth of a Surgical Workforce Access Team, SWAT, in the Time of COVID 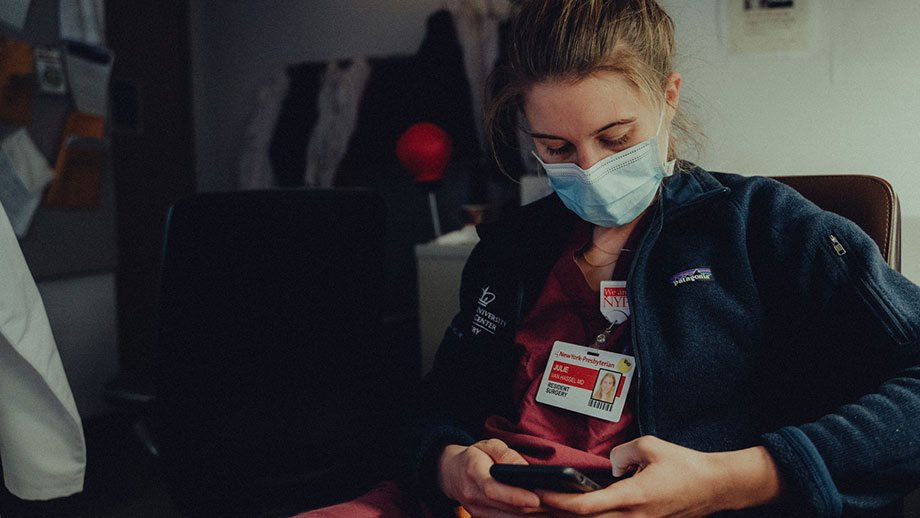 The life of a surgical resident is a grind. Usually comprised of 12 to 13-hour days, mostly Monday through Friday, sometimes Monday through Sunday. A rigorous period of hands-on training, intense work, and of course constant operations.

Residency is grueling, but it is not particularly erratic. Programs adhere to strict schedules, every task has a process, expectations are clear. It’s go, go, go in a standardized world, structured and sterile. At virtually any other moment in time, years in residency mirror one another. There is no touchpoint for comparison to what came blowing through the door as COVID-19 struck New York City.

“How abnormal this is from what we do every day is actually extreme and quite exhausting,” says Sophia Tam, MD, co-administrative chief resident. Closing out her fifth and final year next month, the role makes Dr. Tam one of two administrative point persons for her surgical residency program. “My job is a lot of unglorified work. We coordinate all the residents’ schedules for the entire year, which includes their rotation and call schedules,” she explains. “Why yes, I am a big Excel nerd.”

Loving a spreadsheet is paramount in the task of scheduling 35 residents plus maybe another 15 to 20 interns. Chief residents also tend to the general wellbeing of their peers and answer to any interdisciplinary issues that arise. It’s a heady patchwork of responsibility. “We essentially serve as a liaison between our program directors, our attendings, and the residents.”

On a Wednesday in the middle of March, Dr. Tam was on rotation at the Allen Hospital in upper manhattan when whispers of the first COVID patients to be admitted began circulating. “I remember the ICU calling me about helping to put in some central lines, and that’s not a common request we get so it was a little strange,” explains Dr. Tam. “We get it sometimes, but usually it's really because they're having a difficult time placing it. It's not because they don't have time or they're too overwhelmed.”

That same morning Beth Hochman, MD, called. Dr. Hochman, trauma and critical care surgeon, is the associate director of the residency program. She also happened to once occupy the same co-administrative chief resident role during her residency at Columbia. As Dr. Tam puts it, “She’s amazing, and she does ICU everything.”

Her message was clear, the crisis was burgeoning; our hospital could run out of beds. Dr. Hochman had been discussing strategy with ER and Surgery leadership. The question at hand: How do we get people out of the ER quickly so we can make room for more and more and more COVID patients?

“Long story short, they wanted to create some type of procedural team in order to offload the ICU teams. There were so many ICU admissions and people needing bedside procedures that they just didn’t have the manpower,” says Dr. Tam. “Central lines, intubations, these are not short procedures. They can take 45 minutes or even an hour.”

The idea coalesced around enlisting a surgical team to be stationed in the ER 24/7. They would field any surgical consults, expedite issues by taking over a lot of these lengthy procedures, and free up ER and ICU staff to tend to the myriad needs of the onslaught of COVID patients. It was a built-in surgery fast track. The Orthopedics department did something similar too.

But within hours they thought, “Why not expand this to the whole hospital?” Attending surgeons were already signing up for redeployments, elective surgery was halted, ORs were being converted into makeshift ICUs, and strangely enough, surgical patients seemed to all but disappear in the ER. Where were the gallbladder attacks, hernias, appendicitis? It was COVID, all COVID.

“It was really strange, sometimes we get 20-some consults a day. People with surgical problems just weren’t coming to the ER anymore. At this point, we essentially had a bunch of surgery residents and attendings sitting around with no surgery and no consults. Everyone’s a little bit antsy,” says Dr. Tam. “If you know any surgeons, you know we don’t like to sit around that much.”

Within hours, the chief residents went to work creating a Surgical Workforce Access Team, SWAT, for anyone who needed their services, anywhere in the hospital. “As you can imagine, this was all a super dynamic process. Me and one of my co-chiefs Shunpei Okochi decided that the best way to do it was to staff SWAT in 12-hour shifts, 24 hours a day.”

Dynamic indeed. In a few short hours, they had to decide how many residents would be adequate to cover the shifts (they ended on a minimum of two senior residents and one attending), what supplies they would need, how they would get them without depleting ICU supply closets, how to preserve the most PPE, the easiest way for colleagues to contact SWAT, and most importantly how to advertise that they in fact exist.

“Step one was finding a way for people to get in contact with us. So, we created a SWAT pager and distributed that number so people could call us,” she explains. “Then we created a contact team in Epic [the hospital’s electronic medical record system] specifically for us so that anyone could text us, page us, reach us through Epic if they needed something.”

Step two was creating a supply chain. And they went right to the source, the hospital’s central supply team. “Shunpei was able to make a deal with them and coordinate shipping directly to us, basically immediately,” says Dr. Tam. “Then people who weren’t being utilized that frequently down in central supply volunteered to organize the materials for our SWAT surgical library.” 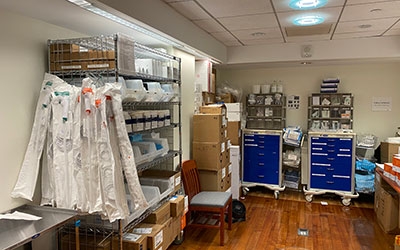 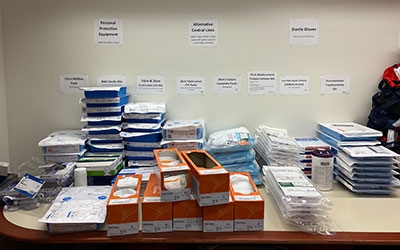 They took over a room down the hall and converted it into a grab-and-go library, fully restocked every day by the central supply team. “The list was definitely edited the first few days. But generally speaking the bags contain a triple-lumen catheter, central line, a portable ultrasound, a dialysis catheter and all the materials you need to put those in—something to sterilize, drapes, dressing to secure the line once you’re done,” she explains.

Later that same afternoon Dr. Tam got a text from Dr. Hochman, “Who’s on tonight?”

“You know we had spent all day planning, and my idea was to start the following day. We were still trying to figure out who was going where. We didn’t have the bags yet,” she explains. “But at that moment everything was really on the upswing, 10 to 11 people had already been intubated that afternoon.”

That’s 11 people needing bedside procedures that take 45-60 minutes, all while more and more critically ill patients flooded the ER, many of which would also need these points of access. They started SWAT that night by stocking anesthesia carts with supplies. A method that was swiftly aborted due to their bulkiness.  “I took the first shift that night and was like, ‘this is not going to work,’ and ended up just grabbing what I needed to go to my next destination,” Dr. Tam explains. “The next day we loaded bags. We got feedback from residents to finalize our list of contents.” 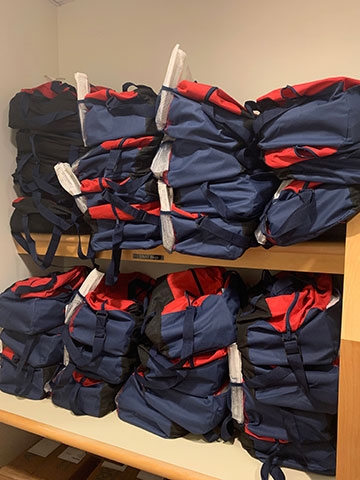 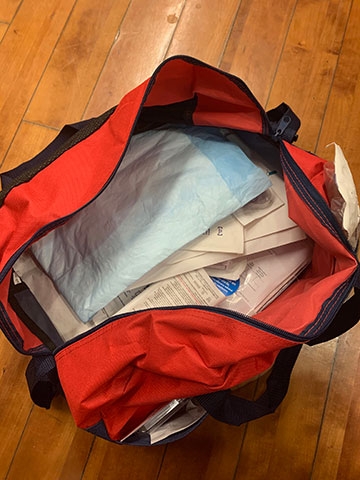 Part of the SWAT team’s goal was to include all the small things one might need as a means to preserve PPE and limit healthcare worker exposure.  “We would leave the bag outside the room and only have one person go in and be draped and sterile. Then we would do everything at once—anything the primary team needed,” she says. “Whether it was a central line, or a dialysis catheter or an arterial line, we would even ask them, ‘Do you need a Foley? (A urinary catheter) Do you need a feeding tube? Do you need an IV? Do you need any blood cultures? What can we do while we're in the room?’”

SWAT was already in the throes when they hit step three: advertise. Residents started putting up flyers throughout the hospital to boost awareness:  “Surgery SWAT Team!  No strings attached.” The message was out; it even went viral on Twitter.

Shifts started to get busy, too busy. The surgery team needed reinforcements. “We only have so many surgery residents and we’re staffing the ORICUs too [ORICUs = operating rooms converted into ICU beds to accommodate extra COVID patients],” explains Dr. Tam. “We were actually spread quite thin despite the fact that there weren’t many operations, so we recruited some other departments. It ended up being Interventional Radiology who played a really big role.”

A few weeks into SWAT, Interventional Radiology added two daytime teams, one at the main Columbia medical campus in Washington Heights and one at the Allen Hospital. “Having their teams was so helpful, especially at Allen. Our staffing at Allen is scarce at baseline, and they were getting hit hard,” she says. “To give you an idea, I think at our peak at Milstein [the main campus hospital] we were doing somewhere close to 20 consults per day, which all may need one or more things. Then at Allen maybe we’d get 10 to 12, which is a lot for one to two people.” 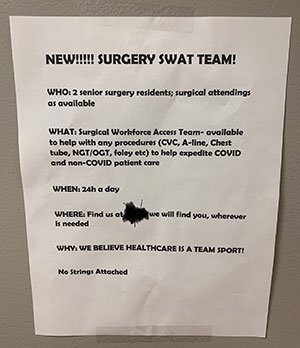 So pleased to have colleagues like ⁦@ColumbiaSurgery⁩. No cases? ICU fellows and attendings slammed? Impromptu procedural strike force! From a couple days of having this up and running, I promise it’s a godsend. Consider working this in to your hospital’s plans for #covid pic.twitter.com/ipcm3IVcvi

All told, the SWAT teams did bedside procedures for anywhere between 300 to 400 patients. “It was nonstop. You’d be doing something and get a request for something else,” says Dr. Tam. “Our residents really stepped up and fulfilled a role they’re not used to filling. Everyone was supportive, willing to help. They deserve a lot of praise because they got this project off the ground. They were the manpower.”

The camaraderie grew day by day. Residents didn’t expect to have attendings on SWAT alongside them 24/7, but there they were asking “Where can I help? Where can you send me?” so often that attendings became a SWAT team fixture too, every shift, day and night. “It actually became fun. You could see that everyone was enjoying doing something new, being of service, and doing it together,” she says. “It really boosted the morale of our department in a tough time. I mean all of our attendings were here, and they weren’t just doing this [SWAT], they were in ICUs. It’s just been great for us to see as residents, to be honest.”

“You know, my job is to support and it’s not hard because residents are sturdy. But we’ve all struggled with the fact that there’s nobody in the hospital besides you and the patients,” says Dr. Tam. “They can’t talk to you. They can’t tell you their life story. They can’t interact. It’s just so tough because people are dying by themselves. That’s what makes this so much more exhausting, we’re not able to have relationships with them or their families.”

A private pause, a moment to really reflect is a scarce commodity. Sophia Tam has not yet had time to process this experience, her absolutely unprecedented whirlwind of a close to surgical residency. In fact, she says she’s just getting around to realizing that this period of her life is ending. Without the celebration she expected, without the pomp and circumstance, but with an appreciation for a team she’ll never ever forget.

“You know, I think this experience is going to make me miss this place a lot more. Seeing the way we came together in such a difficult time with little resources and made all this happen.  It’s amazing,” she says. “I am truly inspired by all the people who work here. I hope that they've instilled that kind of determination and teamwork in me so that as I go somewhere else I can bring it there. Because the people who work here are truly amazing.”

She trailed off for a moment, “I’m just so glad we were able to help.”