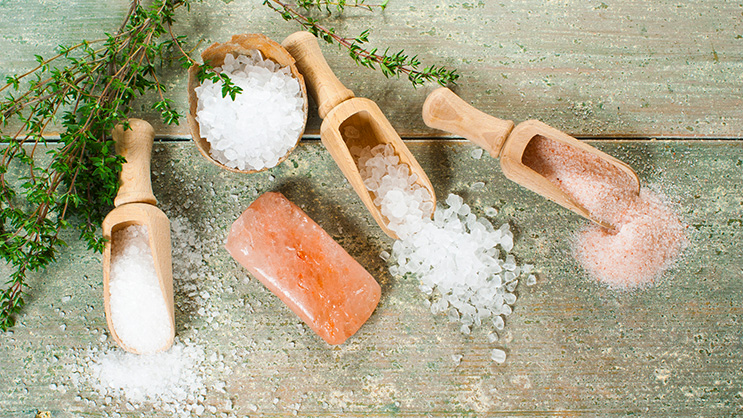 You can find the claims of miracle diets in every corner of the internet; astonishing and elaborate fabrications expertly veiled as medical science. Some claims may be based in fact, others are so outlandish they become downright dangerous. When it comes to the thyroid, contrary to much of the fodder online, there is no scientifically-proven ideal diet. But there are elements within the diet that can optimize thyroid health and certain foods that can be potentially detrimental.

Iodine is a mineral that naturally occurs in seafood, dairy, and kelp. In some regions, it’s in the soil and groundwater, feeding iodine to the plants that grow and animals who graze. But you may know this trace element best from using iodized table salt, a product fortified with iodine to ensure proper intake. Today, most countries worldwide are iodine sufficient only because they iodize their salt.

The United States started iodizing salt in the 1920s, mostly due to the discovery of an endemic of children found to have enlarged thyroids, called goiters, in the regions of the Great Lakes, the high Appalachians, and Northwest—an area that would become known as “the goiter belt.”

“The reality is if places are very, very landlocked, they may not get proper amounts of iodine because their diets lack the foods in which it naturally occurs,” says Dr. Lowe. “And/or sometimes these foods don’t have enough.” Deficiency in thyroid function can have far-ranging impacts and seriously affect fetal and childhood development.

“If children are born to moms who are endemically iodine-deficient—just because they don't have enough—then there's a high rate of cognitive delay, and there's something called cretinism or congenital hypothyroidism,” says Dr. Lowe. “And it really is something that is completely preventable, it’s because they lack access to iodine. This deficiency can lead to cognitive defects, growth issues, sometimes deafness and muteness. So, it can be a really big problem—and, again, it is certainly preventable worldwide.”

The simple approach of adding a fixed amount of iodine to such a universal foodstuff was incredibly effective. After the introduction of iodized table salt, the rate of iodine deficiency plummeted in the United States. Since then, at least 120 countries have adopted mandatory iodization of all food-grade salt. “You know, unfortunately, in the U.S. the salt iodization program is still voluntary even with its proven success. And even so, to this day we do pretty well, but iodine deficiency still affects approximately 2 billion people internationally.”

The voluntary nature of the United States iodization program makes for common misconceptions among consumers largely on two fronts—first, most Americans now get the majority of their salt from processed foods. Second, the FDA does not require listing iodine content on food packaging.

“Many people likely assume iodine is in all salt, that it’s something we don’t have to worry about. But there is no iodine in processed foods in our country, so even with all the salt in there we don’t get the benefit of iodine,” says Dr. Lowe. “Another thing to keep in mind is the rise of cooking with sea salts and kosher salts, most of which is non-iodized.”

Some studies published in the last two decades have shown that iodine deficiency is “not a non-problem,” as Dr. Lowe put it. People are cutting down on their salt intake, which is great for overall health, but the salt that is ingested is then non-iodized. “It hasn’t been eradicated in the U.S. for that reason,” explains Dr. Lowe. “But when we’re only relying on other sources, the dairy, the enriched bread, the seafood, you can get enough. It just takes awareness and a little effort.”

This doesn’t mean you should run out and overcompensate with iodine supplements either. “Overdosing on iodine can actually lead to unpredictable effects on the thyroid,” says Dr. Lowe. “Too much iodine can lead to hyperthyroidism in people with thyroid nodules or underlying thyroid disease, or it can be quite immunogenic and cause hypothyroid, in a way freezing the thyroid for a period of time.”

That’s why opting for iodized table salt when you cook or season food is a good thing; it’s regulated to be fortified at proper levels. “Using iodized salt is a way to not have to really think about it. You know you’ll get enough,” explains Dr. Lowe. “It’s a huge problem to have too little, but it is also a problem to have too much. So like in all things it’s about balance.”