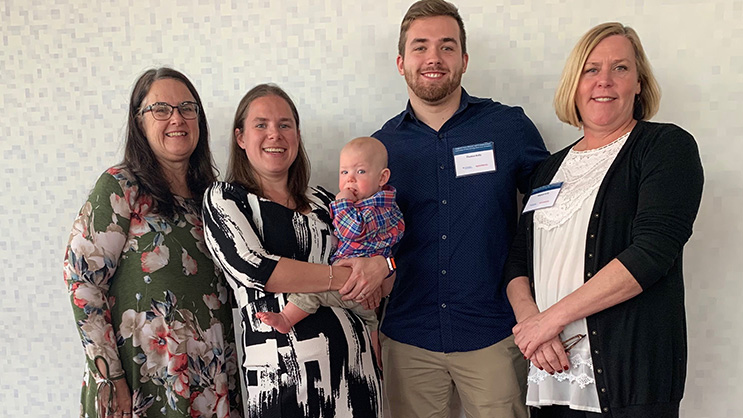 Alyssa Smith Riggan hands her nearly seven-month son to her mother, Teresa, and takes to the podium to address a room full of the world’s top liver specialists. Baby pictures, school portraits, and wedding photos flank both sides of the podium. With each new rite of passage flicking across the screen, someone in the crowd of medical specialists draws in a sharp breath.

It isn’t that Alyssa’s photos or experiences are unusual – quite the opposite. It’s the mere suggestion of normalcy that elicits a response from even the most stoic of doctors in the audience. Alyssa is the first-ever living donor liver transplant recipient in the United States, and 30 years later, these milestones take on a whole new meaning of hope.

When Alyssa was only 11 months old, she was diagnosed with biliary atresia, a life-threatening congenital liver condition. Like thousands of other infants with congenital liver conditions, Alyssa’s only option was to wait for a healthy deceased donor liver. But then Teresa, Alyssa’s mother, was offered a rare opportunity by Alyssa’s care team at the University of Chicago: she could donate a part of her liver to save her infant daughter, making history in the process.

At the time, no one in the United States had undergone a living donor liver transplant. Several successful surgeries occurred in other countries, but the United States was just entering into the field. How did the unknowns involved in any new treatment or procedure affect Teresa’s decision? It takes her merely a split-second to answer – “there was no doubt in my mind about living liver donor transplant once I heard about what it could mean for my baby.” Even 30 years later, the certainty in her eyes and in her voice is unmistakable.

Surgeon Jean Emond, MD, now head of transplantation at Columbia, looks fondly at both pairs of recipients and donors when they greet the crowd at a recent conference on liver disease and liver transplantation in downtown Manhattan. Dr. Emond was part of the University of Chicago team that treated Alyssa, and he knew he could bring this life-saving procedure to babies and their families in other parts of the country, which is how he ended up treating Thomas Kelly 21 years ago with the same novel procedure. The Kelly’s talked to other surgical teams, but only Columbia and Dr. Emond actively pursued a pathway to living donor transplantation at the time.

“The other hospitals said we were crazy to consider living donor,” said Meghan. She looks fondly at her son as she recounts the trials and tribulations that led them to Columbia. She still chokes up when she tells the crowd about the time between receiving a diagnosis and understanding the protocols around the innovative and untested living donor procedure.  “I remember being taken into a room with my husband and the doctors, and all I could remember thinking was ‘please don’t tell me my baby died.’” Meghan’s voice shakes when she tells that part of the story.

Although they never met until this moment, Teresa and Meghan exchange a look, understanding each other like no one else in the room. Almost a decade’s worth of innovation in living liver donor transplant separates these two mothers, but their experiences are remarkably similar. Alyssa and Thomas eye each other with mutual fascination: perhaps they’re two of only a handful of adults in the entire world who could commiserate at the newness of being one of the first to undergo something so specialized and rare and live to tell the story so casually years later.

“I’m only really famous at the hospital,” says Thomas, smiling. He still meets with specialist Steven Lobritto, MD, every six months for a check-up at Columbia. “When I come in and there are new medical students, they always to take a look at me because they’ve never met a living liver donor recipient who is this old before. It’s the only place where I’m treated like a rockstar just for being me.”

Thomas lists the medications he takes to the crowd. In any other universe, this level of personal detail would be an invasion of privacy, but in a room of doctors and nurses, some of whom have taken care of Thomas since infancy, the recitation is met with nods and follow-up questions. He looks at the crowd from the podium and pauses briefly. “If not for the doctors and especially my mother, I wouldn’t be here.”

These realizations wash over everyone and an unmistakable moment of gratitude fills the room. Even now, both mothers have made an impact on other families facing the same issues today. A classmate of Alyssa’s went to Teresa for advice after her baby was diagnosed with a congenital condition requiring transplantation. Meghan and her family run a nonprofit to help other families access quality care for transplantation. Meghan recently spoke with a family considering living donor transplant at Columbia, a responsibility she takes seriously.

The panel ends and the crowd wanes. Alyssa will pack up her baby, Daniel, and say goodbye to her mother before returning to Nebraska. Thomas will head back to New Jersey where he is excited to get back to Seton Hall’s sports teams in the fall. Meghan, Teresa, and their families sleep each night a little easier, thankful for each morning, birthday, and graduation they can share with their grown children these past three decades.

Learn more about the Living Liver Donor Program at Columbia