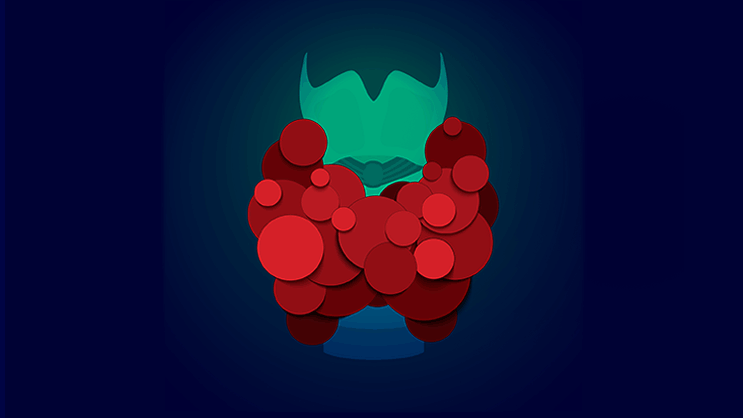 65 percent of people will have a thyroid nodule in their lifetime. Not everyone will have a large nodule, “but 65 percent, that’s a lot of people,” explains Jennifer Kuo, MD, Surgical Director of the Thyroid Biopsy Clinic at the Columbia Thyroid Center. “Within that, 5 percent are cancer. So this is huge.”

The “this” that Dr. Kuo is referring to is interventional endocrinology, an emerging area that “has the potential to really revolutionize the way we treat these diseases. It’s not going to be the right treatment for everyone but it is going to be a good treatment for a lot of people.”

In this interview, Dr. Kuo discusses the new Interventional Endocrinology Program at Columbia and the non-surgical treatments now being offered to patients with thyroid nodules.

Can you explain the term ‘interventional endocrinology’?

Interventional endocrinology is an emerging field where we’re using nonsurgical interventions to address what would typically or traditionally be surgical endocrine disorders.

Most of the time we’re talking about thyroid pathology, although it can be translated to the parathyroid, and internationally some are using it for adrenal, but that’s probably going to take a while to come to the US.

That’s what we do here at Columbia; you’re avoiding general anesthesia, you’re avoiding surgery. It is technically sort of a cosmetic procedure in that you avoid a scar, too. It’s just a simple puncture site that heals just like a biopsy site would heal.

Why do you have to remove thyroid nodules that are noncancerous? Are there symptoms?

Thyroid nodules that our patients have tend to be on the larger side because they’re starting to have problems with systems, you know, difficulty swallowing, difficulty breathing, pressure in the neck, potentially increased pressure on the nerve controlling the voice box that can change their voice a little bit.

These are nodules that have been biopsied and proven to not have cancer, but we have to consider surgery because they’re starting to cause problems. In general, there are not a lot of things we can do to prevent further growth of these nodules, so even if it’s just a single nodule, patients often have to undergo lobectomy, which is the removal of that half of the thyroid gland.

Are there benefits to choosing radiofrequency ablation over lobectomy?

Thyroid lobectomy is a pretty straight forward operation. It’s outpatient here at Columbia, good outcomes, the surgical complication risk is low, and patients tolerate it very well. With lobectomy, most patients will do fine and don’t need any thyroid hormone supplementation because the other side takes over. But at least 25 percent would ultimately need some thyroid hormone supplementation—a thyroid hormone pill. They may not need it right away, could be a couple of years down the line after their surgery, but 25-33 percent of patients will require it.

RFA or radiofrequency ablation is an alternative treatment. The key thing is that for these patients who were looking at a 25-30 percent risk of needing thyroid hormone, thyroid hormone dependency is almost zero. Because we’ve targeted just the nodule and not any of the normal thyroid tissue that surrounds it.

How does the targeted ablation work exactly?

It’s a little bit different than other ablation techniques, in that when we ablate a lesion in the liver or the bone, we insert the electrode into the middle of the tumor, place it and just leave it there and it ablates a certain perimeter around the tip.

For a thyroid nodule, it’s different because it’s a small space and lesions are pretty small in comparison. We’re using very specialized electrodes for the thyroid gland which right now only one company produces. So, they’re smaller, they’re easier, they allow for much more precise targeting. The electrode is actually constantly moving inside the thyroid gland, and that helps to prevent overheating of the tissue—it’s called a moving shot technique.

At the end of the day with a good ablation, we are able to achieve an average of 80-90 percent volume reduction of these nodules without surgery and without a need for hormone supplementation in the future.

What happens post-procedure? If the nodule is gone, and it was benign, what’s the likelihood nodules could reappear?

That’s the key, these have to be benign lesions. We have to be confident that the cells within these nodules are benign and not going to cause a problem in the future. In terms of follow up, it’s using ultrasound, looking at objective measures of volume reduction and then patient symptoms.

Sometimes due to location, we can’t ablate the whole nodule, and that’s to protect certain structures that may be nearby. For some very large nodules, multiple ablations may be needed. But not always. In those cases, say we achieve 50 percent volume reduction and the patient’s symptoms are gone, then it’s technically a successful procedure.

If by chance the nodule grows back and there’s a volume reoccurrence and the patient becomes symptomatic again, then you can always do the procedure again. Having this procedure does not actually preclude having surgery down the line. You can always go back to the traditional approach of surgery if you needed to.

What is your advice to someone in the process of seeking care for thyroid disorders, or someone who thinks they may have nodules?

You always have to start at the very beginning—if you have any concern for any thyroid disorders always see a specialist, get your blood test looked at. You want to make sure your thyroid function is okay and that’s not an issue. And then if you have nodules, you want to have a thorough neck ultrasound, and if indicated a fine needle aspiration biopsy. And then with that information—this is the standard management operation at this point in time—you’ll discuss what those management options are.

Can anyone with benign nodules get this non-surgical treatment? What about other types of lesions?

If you’re looking at thyroid cancer or indeterminant lesions—what I refer to as the gray zone—that are not cancer lesions and not completely benign either, this treatment is not an option. You’re going to have to go down the line of surgery or molecular profiling, or something else that’s already been established.

But if it’s a benign nodule, it’s large enough, and it’s starting to cause problems then there is the option for radiofrequency ablation. If it’s benign and small, and not causing problems, you don’t have to do anything. The recommendation is the same: routine follow-ups, thyroid function tests, interval ultrasounds to see if the nodule changes in any suspicious manner.

After thorough discussion of the advantages and disadvantages of both, they can choose which one is appropriate for them. But to be able to offer patients non-surgical treatment where the need for potential thyroid hormone in the future is almost zero is huge.

For someone with a large, symptomatic benign nodule, are there any health-related limitations to getting RFA?

There are a few limitations, or concerns. It’s a frequency ablation, so it’s an electrical current that’s running through the electrode, and pregnancy is not a good state to be in for this procedure. If you’re symptomatic and you’re pregnant and you need something done right away then surgery is probably the better option.

Also, patients with cardiac arrhythmias, but aside from that, I think the relative contraindications are significantly less than surgery because you’re not going under general anesthesia.

Are there additional uses for radiofrequency ablation? Do you see any other promising uses for it in the future?

And we can actually also use it for metastatic disease. There’s only so many times you can go into the neck safely, and surgery really was what we had to offer patients in terms of recurrent disease in the neck. But this will allow us to have an additional tool for targeted therapy that really does seem to work to control the disease. It’s going to be a huge tool for us with patients who have localized metastatic disease and have been operated on many, many times.

What other tools do you have for patients with metastatic disease? Are there other techniques available?

Prior to RFA, I was already using a different ultrasound-guided technique—ethanol ablation. This is where you use ultrasound in your guide placement of a needle into a lesion, and you inject 100 percent alcohol. It will cause an inflammatory response that then scars down the lesion.

Who are candidates for ethanol ablation? Does it work for any type of lesion?

We were using this for metastatic disease for very select patients; those who have undergone multiple neck surgeries for localized metastatic disease in the neck. And we were running out of options to offer them, so this was something very beneficial that we could offer.

Ethanol ablation is actually a really good interventional technique for thyroid nodules that are predominantly fluid-filled, or thyroid cysts. Nodules can be mainly solid, which we normally see, or a combination of solid and fluid. And then about 5-10 percent of the time, you have thyroid nodules that are 100 percent fluid-filled. And the malignancy risk is almost zero for those nodules, but they tend to reaccumulate pretty rapidly.

You can aspirate the fluid and it would go away a little bit, but it would reaccumulate faster and larger than before. So ultimately, again, if the patient were really symptomatic from these thyroid cysts, then they would have needed thyroid surgery to remove that half of the thyroid gland.

But alternatively, now we offer ultrasound-guided ethanol ablation, so a slightly bigger needle than we would normally use for biopsy. But we basically suck out fluid, we irrigate the nodule, we clear it out of all if it’s debris, and then inject ethanol into the cyst. In time ethanol causes an inflammatory, scars down the capsule and vessels of the thyroid cyst, and then it shrinks down.

For nodules we more commonly see, a mix of fluid and solid cells, radiofrequency ablation (RFA) has proven to be a better treatment.

What’s the most important message you hope patients take away from this conversation about new interventional treatments?

It's just very exciting. And I truly believe that this is a good, safe alternative treatment for a lot of our patients. We’re talking about a third of the patients we treat with endocrine surgery that this could impact. A third that won’t need surgery or hormone supplementation.