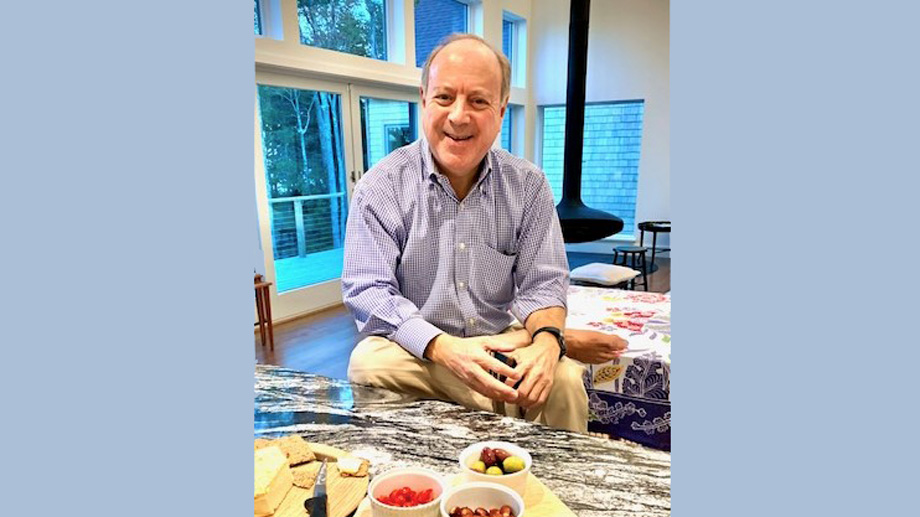 By Kendra A. Kabasele

When Nicholas Serwer found out that he would need to have his aortic valve replaced, he was clear on one thing — “I wanted to avoid open heart surgery at all costs,” he said. While he’d had other surgeries in the past — a shoulder replacement, intestinal surgery, and orthopedic foot surgery — for Nicholas, 66, several things didn’t sit well with him about this one.

Nicholas’ health story began overseas. A native New Yorker, he had been living in Singapore for over 25 years. Despite the successful treatment and control of his hyperlipidemia condition using diet, exercise, lifestyle changes, and some medication, Nicholas’ cardiologist began doing echocardiograms.

Following the discovery that he had aortic stenosis, which occurs when the valve narrows, preventing the proper flow of blood from the heart to the aorta and throughout the body, his doctor told him, “Well, you’re okay for now, but the usual course is that it progresses slowly over the years, and the stenosis grows worse.” By May of 2021, his echocardiogram results had progressed enough that he would require surgery.

“If I did not have my aortic valve replaced, I had a 50% chance of dying in two or three years,” he said.

“You hear about people having open heart surgery all the time, but then you don’t really think of–at least I didn’t really think about–the details that much,” he admitted. “Although sure it’s serious stuff, but also it’s become almost routine. And given that it is relatively routine, it would seem that there should be nothing to be afraid of – at least without knowing the details.”

But once Nicholas started his research into the details of the surgery, he started to become fearful. He learned that open-heart surgery entails cracking open the patient’s ribcage and sternum, lowering the body temperature to at or near freezing, stopping the heart and being put on a heart and lung machine during the procedure, and then the heart being restarted after the new valve has been put in, and waking up intubated. After taking this all in, he figured that open-heart surgery would have to be worse, and maybe much worse, than anything he’d been through before,

And then Nicholas went down more rabbit holes that caused fear to grow. “One was a tangent of YouTube videos about open heart surgery, whether for aortic valve replacement or coronary bypass, or in many cases, both,” he said. “And the videos, the YouTube videos were terrifying.”

For example, several of the videos concerned awaking from surgery still intubated. Already fearful of this the YouTube videos only exacerbated things.

“That's another part of the surgery that sounded pretty scary—that you have to be intubated. They shove a breathing tube down your throat,” he said. “Then I learned that when you wake up, you are still intubated. You still have a breathing tube down your throat. You can't talk, and this is where things, to me, got the most scary, because the YouTube videos were describing, ‘Oh, you'll feel like you're drowning, or you'll feel like you want to pull that breathing tube out. You're on it for three or four hours’. and maybe it feels like being waterboarded, and it just sounded absolutely awful.”

On top of all of the reasons he felt scared, Nicholas was not interested in a lengthy recovery time — another piece of information that led him to research alternative plans. When he found out about TAVR, or transcatheter aortic valve replacement (a minimally invasive procedure), he thought he had found his solution — his escape from the bigger, more involved surgery. The consensus, between his cardiologist in Singapore, and other doctors in the U.S., was that he wasn’t a good candidate for the TAVR procedure.

His cardiologist explained it quite simply, saying, “Because you're too young and too healthy, you're going to outlive the valve, and I don't recommend it.”

Although still very concerned about the open heart surgery, earlier this year, Nicholas agreed to move forward with the procedure.

“My brother was going to be there and I told him, ‘I'm going to wake up intubated, and you'll see, I'll probably want to pull the thing out and it's going to be horrible,’” he shared.

Yet everything Nicholas had feared did not transpire, and his aortic valve replacement surgery was a success.

“All the things that I was afraid of—about waking up intubated, about feeling like I was drowning, and it would hurt, and wanting to pull the tube out; maybe it would be like being waterboarded,” he said. “None of those things were the case in my situation. And in fact, when I woke up, my brother was by my side; and I didn't have any sensation that I was drowning.”

Nicholas had heard that after the breathing tube was removed, he wouldn’t be able to talk and his vocal cords and breathing would hurt. Thirty minutes (not hours) after he awoke, the breathing tube was removed, and he was able to talk right away and didn’t have any throat pain. Another positive surprise was that the pain from the surgery itself wasn’t as bad as what he’d endured in his previous surgeries. He took painkillers (opiates) for about 36 or 48 hours, and then transitioned to Tylenol and a mild narcotic. A third surprise was that within about 12 hours, Nicholas was up and walking.

YouTube videos detailed how painful it would be to have chest tubes removed; the videos had horrified Nicholas. But his fear dissipated when it was his turn because, he said, it simply wasn’t painful at all and certainly was not anything like the horrible pain he had anticipated. 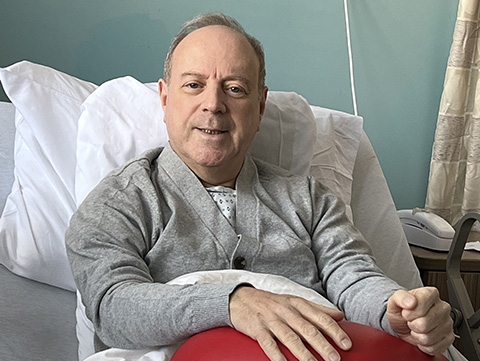 After a quick moment of reflection, Nicholas went on to say, “Well, they [the YouTube patients] also probably didn't have the benefit of the surgical team — Dr. Craig Smith's team at Columbia. And so part of all my positiveness of none of this hurting and being off the pain killers and the speed of recovery, I think a lot of it has to be due to the quality of the care that I received. And all of my friends said, ‘Yeah, you made the right decision to find the best team to take care of you for this.’ So, I'm glad. And I appreciate that.”

Other factors, Nicholas and his doctors believe, helped with his positive experience. One such factor is the fact that prior to surgery, he stayed on top of his health, maintaining a healthy lifestyle. He was mildly symptomatic (shortness of breath, some chest pain), so while he refrained from riding his bike, he did get in at least five kilometer walks, or at least 10,000 steps a day, right up until the surgery. Another thing that was helpful to Nicholas, post surgery, was that he checked into a rehabilitation facility for six weeks, where he received intensive physical and occupational therapy. Six weeks of care was pertinent to his recovery, and the healing of his sternum.

Between his surgical scars healing and the things he was able to do in such a short time after surgery, like walking five miles a day and traveling to Europe for a wedding (he danced at the reception!), Nicholas said, with a smile on his face, “I don’t think I’ve felt so good since I was 19 years old! It’s just really remarkable.”

After going through such a roller coaster of emotions — from fear to relief, and everything in between — Nicholas has some encouraging words for anyone going into this type of operation and holding the same types of fears.

“I said to myself, lots of other people have open heart surgery.  They get through it—and I'll get through it, too,” he said. “And so, I would say to people contemplating this, that that ought to be your expectation, that you're going to get through this, too. And it probably won’t be nearly as bad as you might fear.”