We are thrilled to announce the winners of the 2022 Ruth Leff Seigel Awards for pancreatic cancer research, Ronald A. DePinho, M.D. and Anil K. Rustgi, M.D. Each year, The Siegel family entrusts the Pancreas Center to identify the investigator, or team of investigators, who has had the most impactful contribution to the understanding/treatment/advancement of pancreatic cancer. They consider efforts in pancreatic cancer research, including but not limited to basic biology, population biology, public health, and/or translational science. Not only do the winners of the Ruth Leff Siegel Award have a track record of high-quality work in the field, they have also contributed to our understanding of pancreatic cancer in the past year, and will continue to do so in the future. 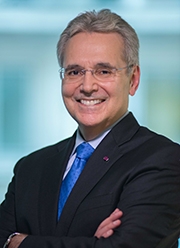 Ronald A. DePinho, M.D. is the past president and distinguished university professor at MD Anderson Cancer Center in Houston, Texas. He studied biology at Fordham University, where he graduated salutatorian, received his M.D. degree with distinction from the Albert Einstein College of Medicine, and performed his residency and postdoctoral training at Columbia-Presbyterian Medical Center. His research career began at Einstein as the Feinberg Senior Faculty Scholar in Cancer Research and an ACS Research Professor. He then joined the Dana-Farber Cancer Institute and Harvard Medical School where he was the founding Director of the Belfer Institute for Applied Cancer Science, the first efforts to utilize genomic data and genetic model systems to guide precision cancer drug development. There, he also launched the first NCI program project grant focused on pancreas cancer, which is now in its fifth renewal and has continually involving multiple institutions. During his 6-year tenure as MD Anderson’s president, Dr. DePinho conceived and launched the Cancer Moon Shots Program including one focused on pancreas cancer, enhanced MD Anderson’s research and training excellence, recruited many world class faculty including its first Nobel, and expanded its global network to reach one-third of the human population. His research program has made fundamental contributions to our understanding of cancer, aging and degenerative disorders, and these discoveries have led to clinical advances. Some of his contributions include establishment of the concept of tumor maintenance genes which contributed to the foundation for precision targeted therapy, discovery of Sin3 which linked sequence specific transcription factors and chromatin regulators, discovery that p53’s tumor suppressor functions involve activation of apoptosis to eliminate aberrantly cycling cells, establishment of the concepts of collateral lethality and synthetic essentiality which enables targeting of tumor suppressor events, demonstration of KRAS as a tumor maintenance gene and its role in anabolic metabolism in pancreas cancer, discovery of a core pathway for aging, demonstration that aging is a reversible process, and discovery of non-classical function of telomerase reverse transcriptase in the regulation of genes governing hallmarks of aging as well as genes involved in the pathogenesis of Alzheimer’s Disease. For his contributions to cancer, aging and healthcare, Dr. DePinho has been received the AACR Clowes Memorial Award, the Albert Szent-Gyorgyi Prize, the Ellis Island Medal of Honor, Portugal’s Order of Saint James of the Sword (knighthood), among other awards and honors. He is a member of the National Academy of Medicine and the National Academy of Science, and a fellow of the American Academy of Arts and Sciences, the American Association of the Advancement of Science and the American Association of Cancer Research. 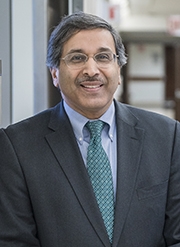 Anil K. Rustgi, M.D. is the Director of the Herbert Irving Comprehensive Cancer Center at Columbia University Irving Medical Center/New York Presbyterian campus. Dr. Rustgi's interdisciplinary research focuses on tumor initiation, the tumor microenvironment and tumor metastasis in the context of gastrointestinal cancers, including cancer of the esophagus, pancreas, and colon. Dr. Rustgi's lab works to translate their discoveries into improving molecular diagnostics and finding new experimental therapeutics for patients and is funded through the NIH. He has more than 350 publications and his work has appeared in high-impact journals such as Nature, Nature Genetics, Nature Medicine, Cancer Discovery, Cancer Cell, Genes and Development, Gastroenterology, Journal of Clinical Investigation, PNAS and New England Journal of Medicine.