It’s Not All Doom and Gloom with a Disappearing Pancreas 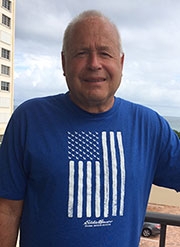 May of 2016 was an exciting time for Tony Rafaniello. Now retired as an assistant principal and basketball coach, Tony and his wife Dale were preparing for a trip to Italy and a cruise around the Isle of Sicily. His mind often drifted to all he would do, see and eat in the weeks ahead. Two days before departure, he woke up with terrible stomach pain. “I was nauseous and throwing up,” Tony says. “My wife’s a nurse at a New Jersey hospital, so we drove there right away.” In the ER, Tony was given some pain medication. Then, suddenly, he passed out. For the next ten days, he was unconscious, breathing with the aid of a ventilator.

When he finally woke up, Tony couldn’t move his arms or legs.  He couldn’t hold a cell phone, and he could barely hold down food. As he was transferred to a rehabilitation center, his doctor warned, “You’re still not out of the woods. Your pancreas is surrounded by fluid. If it gets infected, you’ll need emergency surgery. And it’s going to be a big deal.” Tony had to process this dire sounding report and act quickly. Italy would have to wait.

His doctor replied with a hospital recommendation, “As soon as you can get to the Pancreas Center in New York.”

Tony heeded his advice and scheduled an appointment with Dr. John Poneros, medical director of the Pancreatitis Program.  “When I came in for my exam,” Tony recalls, “I was nauseous 24/7.  I’d been that way for five weeks. And I’d lost forty pounds.” The diagnosis was necrotizing pancreatitis, a life-threatening complication of acute pancreatitis that eats away at the pancreas itself, an essential organ. The disease was moving at an alarmingly rapid rate and would soon consume almost two-thirds of Tony’s pancreas.

“While other doctors were painting a picture of doom and gloom, Dr. Poneros was very positive and knew just what to do,” Tony says. “He promised me I’d start feeling better soon.”

Dr. Poneros is a specialist in minimally invasive techniques and was able to halt Tony’s infection without major surgery.  Over the next three months, he placed several stents to drain the excess fluid. “The amazing thing is that everything was done endoscopically,” Tony says, “I don’t have a single scar on my body. Most of these procedures were completed on an outpatient basis so each time, I had a quick recovery.”

What was once a question of life and death is now a practice in disease management.  Tony is regularly monitored by his doctors and describes his quality of life as terrific. He has to keep his diabetes under control and take his insulin every day, but not much else has changed.

The pancreas plays an important role in digestion, producing enzymes that break down food and helping to regulate the body’s sugar levels.  With only thirty percent of his organ left, it’s surprising that Tony has had to make so few changes in his eating habits.

“I thought for sure I’d be on a severely restricted diet,” Tony says. “I couldn’t believe it when Dr. Poneros said, ‘Eat whatever you want, just don’t go overboard.’”

The only thing Tony has had to give up is the occasional glass of wine or beer. “Because I’m diabetic,” he says, “I already go easy on the sweets and carbs.” He still gets to indulge in his favorite foods and explore new dishes without worry.

The best part? Tony is traveling again. He can comfortably voyage to parts unknown, indulge in flavors and tastes of different cultures, and live his retirement the way he planned. Last year, he and Dale finally made it to Italy and cruised the Mediterranean. It was a trip they’ll never forget.