It Takes a Village to Heal a Patient

Roberta Schneider, a vibrant and attractive woman in her 70s, and one of Columbia’s “Amazing Patients,”  was cared for by more than a dozen of our dedicated surgeons and specialists. Recently featured on ABC-TV’s Emmy-winning show Medical Marvels, Roberta has also published a memoir, Cancer Saved My Life, that opens with this stunning confession: 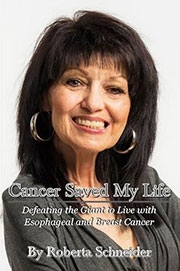 I have no breasts. I have no esophagus, I have no stomach.  I have no ovaries, I have no fallopian tubes but I have a heart. I have a family. I have a business.  I have had more than my share of surgeries.  But nothing has stopped me.   Many call me the “bionic woman.”

Roberta’s recovery from a near fatal car accident and two life-threatening forms of cancer reads like a made-for-TV movie.  It features a cast of brilliant surgeons who never gave up, a support staff of nurses, aides and physical therapists, and one remarkable heroine.  After more than 21 surgeries, Roberta serves as an inspiration for other patients, telling them, “Stay positive and keep on going. Your life has a purpose and it’s worth fighting for.” She told her story at Columbia’s Lung Health awareness day on May 6th.

Here’s how her journey began. In 1993, Roberta’s car started accelerating on its own and crashed into a tree.  Fortunately, a team of paramedics was right behind her, and after being rescued with the “jaws of life,” Roberta was rushed into surgery at a Long Island hospital. It took several operations to repair a shattered clavicle and femur, leaving Roberta in a wheelchair and with trouble holding up her head. But there were three things in her favor:  The unflagging support of her husband, Barry, and her children.  Work she loved, designing custom clothes, and organizing fashion shoots. And her own natural optimism. Sure that something more could be done, Roberta eventually made her way to Columbia.

In 2002, Dr. James McMurtry, a noted neurosurgeon, invented an operation to refuse Roberta’s vertebrae and give her head some more stability.  “I was in terrible pain but Dr. McMurtry changed all that, and threw away my neck brace,” Roberta recalls.

Two years later, Roberta returned to Columbia to be treated for breast cancer, a decision that would not only save her life but miraculously address many of her previous injuries.  After a full mastectomy and chemotherapy, Roberta opted to have her ovaries and fallopian tubes removed, fearing that her cancer might one day return in these organs. Dr. Jeffrey Ascherman then took charge of her reconstructive surgery. Concerned that Roberta was still in a wheelchair, he referred her to his colleague, Dr. Howard Kiernan, an orthopedic surgeon.  In 2008, Dr. Kiernan operated on Roberta’s feet and gave her a knee replacement, and with the help of the rehab team at Columbia, she was able to walk again.

“Life was great,” Roberta said, until 2009 when, on a trip to Florida, she woke in the middle of the night with severe heartburn and numbness in her arms.  She immediately flew back to New York to consult with her Columbia team.  Gastroenterologist Dr. David Markowitz diagnosed an aggressive form of esophageal cancer near the junction with Roberta’s stomach.  Addressing this new cancer wasn’t easy.  After her car accident, Roberta had a metal rod in her chest. Her thoracic surgeon, Dr. Frank D’Ovidio, carefully worked around it. After excising the cancer in her stomach and esophagus, he did a gastric pull-up, creating a “human” feeding tube by connecting what was left of Roberta’s esophagus to her small intestine.  As a result of adjusting the access point for this surgery, he was also able to remove 40 lymph nodes to prevent the cancer from spreading.

A couple of years after the esophageal surgery, Roberta had trouble speaking and swallowing. She aspirated her food, resulting in a bout of pneumonia and a trip to the ER.  After making sure there was no recurrence of her cancer, Dr. D’Ovidio sent Roberta to Dr. Lucian Sulica who identified a surprising case of vocal cord paralysis unrelated to her cancer treatment. With an injection, Dr. Sulica was able to repair Roberta's vocal cords, help her regain her voice, and end the choking episodes. “Dr. Sulica cares for singers at the Metropolitan Opera,” Roberta notes, “And I was pleased to be in such good company."

The good news is that Roberta’s Stage 3 esophageal cancer was contained, and, since finishing her treatment, she has remained cancer-free for eight years. “One big factor in the outcome was Roberta’s determination,” says Dr. D’Ovidio.  She brought so much to the table, with her optimism and her willingness to do whatever it takes to heal. We know that patients with this attitude are the ones who tend to do better and recover faster.”

Fit, slim, and energetic, Roberta is now making her debut an author and an inspirational speaker.  Her mission is encouraging other patients to stay optimistic and participate in their own healing. Recently she heard about a patient who was too depressed to undergo surgery for esophageal cancer. After Roberta told him her story, urging him to trust his doctors, he scheduled the operation quickly and is now doing well.

“The will to live comes from the mind, the body and the soul,” Roberta says. “You just have to cultivate that part of you and keep it strong.”

Roberta has other advice for patients dealing with a tough diagnosis, “When you’ve got the worst of the worst, you go to the best of the best.  At Columbia, the doctors are all brilliant and they also work as a team.  Their flawless collaboration is what saved my life.”

Roberta’s book is now available on Amazon. You can watch her on ABC-TV’s Medical Marvels here.