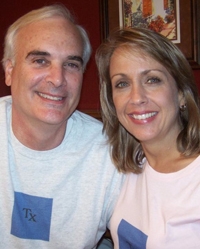 Back in 2000, Elizabeth Macchio, an occupational therapist in her thirties, noticed herself feeling increasingly tired. Her local doctor found elevated levels of enzymatic activity in her liver, but even so, her condition eluded diagnosis for several more years. Finally, in 2004, a diagnosis was made: she had a rare autoimmune liver disease called primary sclerosing cholangitis (PSC). The functioning of her bile ducts was gradually worsening — without a new liver, she would eventually die.

Although she was placed on the waitlist for a deceased donor transplant, Elizabeth could not receive one because she was not sick enough to be at the top of the list. Yet although she wasn’t quite sick enough to be a top-priority transplant patient, her doctors feared that when she did become that sick, there might not be enough time, at that point, to save her. They suggested that she try to find a living donor, someone willing to donate a substantial portion of his or her own liver to help Elizabeth survive. That man turned out to be Scott Perkins.

Scott Perkins is the Assistant Vice President of policy advertising at AT&T. He’s also Elizabeth Macchio’s brother-in-law, and has known her since she was 12 years old. Nobody ever specifically asked him to donate his liver, he says — it just seemed like the right thing to do. “She’s such a good, basic, real person,” he said. “It’s not fair that she would get this disease.”

Elizabeth’s husband, Sal, had undergone testing to see if he could donate, but he had medical issues that would have delayed the process greatly. Elizabeth’s sister’s blood type was not compatible with her own, rendering a transplant between the two of them impossible. Scott, on the other hand, had the right blood type, and was more than sufficiently healthy. He decided firmly that he would donate the left lobe of his liver to help save his sister-in-law’s life.

That he could do so is only possible because of a remarkable characteristic unique (in humans) to the liver: it is a regenerative organ; that is, a full-sized liver can grow back from a smaller piece. In living donor liver transplantation, or LDLT, the recipient’s own diseased liver is removed. A portion of the donor’s liver — in this case, the left lobe — is then transplanted from the donor to the recipient. Over time, that lobe will expand into a full-sized, fully functional liver. Similarly, the donor’s remaining liver will gradually regenerate itself so that, before long, his or her original liver functionality is entirely restored.

After extensive testing to ensure that Scott met the rigorous requirements for organ donation, the operation was arranged. On July 21, 2009, Benjamin Samstein, MD, Surgical Director of the Living Donor Liver Transplant program at NewYork-Presbyterian Hospital/Columbia University Medical Center, and his team operated on Scott in order to remove a portion of his liver. Down the hall, James Guarrera, MD, FACS, Surgical Director of Adult Liver Transplantation, and his team removed Elizabeth Macchio’s diseased liver, and then implanted Scott’s left lobe where Elizabeth’s own liver had been. Everything went smoothly; the operation was a tremendous success.

Scott’s recovery, he says, was relatively swift. In a matter of days, he was home and walking again; within a month, he was back to work. Elizabeth’s recovery was not quite as smooth due to some complications. Eventually, though, she made a full recovery. “She’s got way too much energy now,” Scott jokes; indeed, she feels better now than she has in the last six years.

To this day, Scott considers his decision to donate one of the best decisions he’s ever made. To potential future donors, he has the following to say: “You have to commit. It can’t be a rational decision; it’s got to come from someplace inside you that you don’t even know you have. Once you do, you’ll never regret that decision. It’s not for everybody. But the reward of knowing what you’ve done… well, it’s not an external reward; it’s very much an internal peace with yourself.”