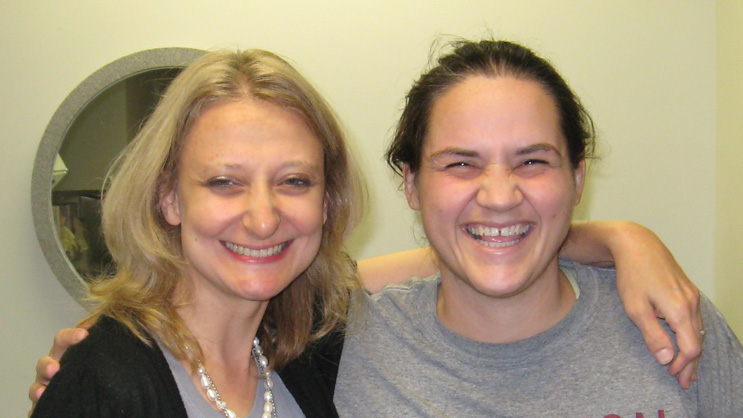 Hello! Let me introduce myself. My name is Alyson, I am 30 years young and a patient of Dr. Beth Schrope's at the Pancreas Center. In August of 2009, I underwent a Whipple procedure to remove a cyst growing in the head of my pancreas and to hopefully alleviate the recurring bouts of pancreatitis I had suffered from for the six years prior. 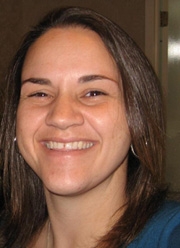 My story about pancreas and digestive health problems actually goes back to my infancy. When I was five months old, I was diagnosed with a choleductal cyst and underwent life-saving surgery to remove the grapefruit-sized cyst, the common bile duct, and my gallbladder. Although I do not remember anything from those first few months of my life, I do remember the issues I had as a teenager. While my friends ate the typical teenage diet of junk food with no problems, I suffered painful attacks that often could not be pinpointed. All we could pinpoint is that the battles were painful and I suffered from time to time. Despite this, my life was as close to normal as it could be. I played sports, and I hung out with my friends. During school activities, I was there leading my peers. I maintained normalcy and a positive attitude even though I had digestive issues. It was difficult from time to time but for the most part it wasn't too bad.

Then later in my early twenties when I was at the end of my college career and at the start of my professional career my health really started to get off track. The digestive problems from my first months of life came back to haunt me. Normal existence suddenly seemed out of reach. I was having trouble digesting food; I needed to be near a restroom after eating. On the rare occasion I wanted to have a drink, I would find myself with spiking fevers, extreme pain and nausea the days that followed. Some might ask why I tested the waters with eating certain foods and having the occasional drink. Well the answer lies in the fact that all too often I would hear from doctors that my symptoms didn't match up and nothing could be identified with certainty. So I had the occasional drink and assumed that it was all because of my surgery as a baby, perhaps scar tissue.

Then in July 2009 after another very bad attack, my sister found the Pancreas Center. Within a week, I had an appointment with Dr. Beth Schrope. Shortly after the initial appointment she called to tell me that she and the team of doctors at the center felt my only option was a Whipple procedure to remove a cyst; a cyst in which 50% of them becomes cancerous. So with all my faith in Dr. Schrope I underwent a 7.5 hour surgery. On that hot August day in 2009, Dr. Schrope gave me back my life and became someone who will always be a part of my life.

To this day many have asked me why I never got angry or why I never asked "Why me?" during these recent years of poor health. The answer is simple. I had always been aware that I had been given a second chance with the lifesaving surgery during infancy. So instead of getting angry that I was getting sick again, I instead was thankful for what I had had until this point. I was thankful that up until the point of my Whipple, life for the most part was good, despite occasional battles. And getting angry was not an option, because that would only bring me down. But trust me, I was aware of all the what if's, but dwelling on them really seemed pointless, so instead I made peace with my situation and faced what was ahead, both the good and bad possibilities.

However, having such awareness and an ability to cope required effort and the right mindset. It entailed some key ingredients in the way I dealt with my life: Instead of looking for big things to satisfy me, I found pleasure in the little things. My philosophy was that if I could make someone else smile each day I had done my job, and it made me feel good. Staying positive despite my health problems meant smiling often, doing well by others, and when the rough days weighed heavily on me, accepting the gift of support that my family, friends and faith offered me. It was difficult on days when life marched forward all around me when I was not feeling well. However, I was able to remain strong, and I stayed eager to see each battle through with whatever fight I had in me. Again, I am not going to say every day during a battle was easy; my family got the brunt of the occasional bad attitude, and I sometimes cried, but I always kept my eyes focused ahead. The battles may have physically gotten me down, but they were not going to take away my attitude.

It has been a little over a year since my surgery and I am doing well. Unfortunately, I do have scar tissue so I have developed chronic pancreatitis. The attacks are painful when they occur, but with the Pancreas Center and Dr. Schrope in my corner I can deal with them without fear and worry that I have no control. There is always a plan in order, so together we always figure it out. With that type of care, the Pancreas Center has become like an extension of my own family. Without them I would feel like a part of my life was missing. They have a magical way about them and as a patient I always feel safe in their care.

As a result of that type of care and dedication, together we have developed the P.E.A.C.E Fund to help lessen the burdens that families endure while a loved one is undergoing treatment for pancreatic cancer or related pancreatic diseases. With compassion and hope, I dream that this fund is able to make the situations of others a little less stressful and a little more peaceful.

As someone who understands what you may be going through, I would like to offer my support to you. I know that there are always going to be those times when it seems easier to sit down and let your situation grab hold of you rather than to summon the strength to push forward. I faced those same issues when I was forced to miss social gatherings, cancel trips, and forego activities. So after reading my story, if you have questions about how to deal with obstacles your job may present, or how to stay strong when you must forego activities, or if you just need to talk to someone who can relate to what you are going through, please contact me. My email address is courage_and_strength@yahoo.com. Together we will help you get through this even if it means just talking to someone. Your strength and courage do not go unnoticed! Good Luck!