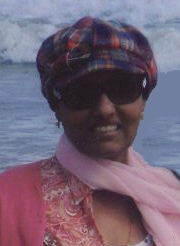 When she made a trip to her local emergency room for a heart problem in 2009, Rokshana Husain could not have foreseen the life-changing journey that visit would initiate, or the series of missteps that would ultimately save her life. While most of us don't imagine that trips to the emergency room are a good thing, Rokshana Husain's proved to be an unanticipated stepping stone to her 'second life.'

Her chest x-ray revealed an abnormality that her doctors initially suspected might be a breast cancer. Later tests found no breast cancer, but did find a lung nodule. Confident with that diagnosis, her doctors were prepared to proceed with treatment. But Rokshana requested additional testing, and a PET scan revealed suspicious activity in her pancreas. After further evaluation, Rokshana was diagnosed with pancreatic cancer and a separate, operable carcinoid tumor in her lung.

Rokshana's lung nodule was successfully removed. Meanwhile, at the guidance of her son, who is an orthopedic surgeon in the US Army, she sought a second opinion regarding her pancreas at a large New York hospital. The doctor there felt a distal pancreatectomy (removal of a portion of her pancreas) would be successful in removing her pancreatic tumor. But once in surgery, it was discovered that her cancer had spread into her abdominal cavity. At this point her doctors declared her cancer inoperable.

Her son once again urged her to seek another opinion, and after meeting with Robert Fine, MD, an oncologist at NewYork-Presbyterian/Columbia, Rokshana started a medical regimen of Gemcitabine, Taxotere, and Xeloda (GTX) in January, 2010. Rokshana responded very well. In July, Dr. Chabot, Director of the Pancreas Center, felt that her primary tumor had shrunk enough to be safely removed, but that she should continue with chemotherapy. By August, PET/CT scans showed that the cancer in Rokshana's abdominal cavity was gone. Dr. Chabot performed distal pancreatectomy with intra-operative heated chemotherapy to remove the pancreatic tumor, and felt hopeful that all cancer had been eliminated from her abdomen with chemoperfusion.

A year after her surgery, Rokshana is immensely grateful for her 'second life,' as she calls it. Her recent CT scan showed no disease. She plans Haij (pilgrimage) to Mecca in October 2011, and expresses her tremendous thanks to Drs. Fine and Chabot for her treatment and care at the Pancreas Center at NewYork-Presbyterian/Columbia.