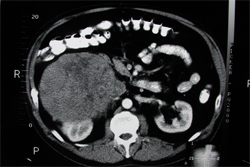 Adrenocortical carcinoma (ACC) is a rare but very dangerous cancer of the adrenal gland. ACC is found in 1 out of every million people and is most common either before 10 years old or between the ages of 50 and 60 years old. Most adrenocortical carcinomas are not due to a genetic problem, although ACC can occur in families with two very rare genetic syndromes: Li-Fraumeni and Beckwith-Wiedemann Syndrome. These tumors usually grow and spread to other parts of the body rapidly, however, if caught early enough, ACC is potentially curable. Children tend to have a better prognosis because it is often found early, however since adults rarely have symptoms they are usually not found until the cancer is large and/or has spread to other parts of the body (i.e. metastasized). In two-thirds of cases, tumors have already spread to surrounding organs or metastasized by the time of diagnosis, making patients Stage 3 or 4. The chart below shows the percent of patients who are alive at 5 years (i.e. 5 year survival) and have had tumor come back (i.e. recurrence rate) for each stage of cancer.

The options for treating a recurrence include another attempt to remove it surgically (i.e. re-operation), radiation therapy, and/or chemotherapy. After a recurrence, the 5-year survival is close to 0%.

Unfortunately, most adult patients do not have any signs or symptoms from ACC, making it very difficult to detect and diagnose at an early stage. Some patients may have pain in the back or sides due to rapid growth of the cancer. In addition, some ACC may make too much cortisol, sex hormones, or rarely aldosterone. The most common hormone overproduction seen with ACC is cortisol which causes the signs and symptoms of Cushing's syndrome. (See Cushing's Syndrome > Signs and Symptoms) Often, ACC may be diagnosed as an adrenal incidentaloma (i.e. it was found on an imaging test that was ordered for another reason)

The only known cure for ACC is to complete surgical removal and the best opportunity to do this is at the first operation. Minimally invasive techniques to remove ACC may be possible in some cases, but most require open surgery in order to completely remove both the tumor and a safe margin of healthy tissue. The decision to use a laparoscopic approach is based on many factors and should be discussed with your surgeon. (See Adrenal Surgery) After the operation, most patients will receive additional therapy such as radiation therapy or chemotherapy. The most common chemotherapy for ACC includes a combination of Mitotane, doxorubicin, cisplatin, and/or etoposide. Some studies suggest a response rate of 48%. Patients who have persistent or recurrent disease after this regimen may be enrolled in a clinical trial. More information for these clinical trials can be found at: clinicaltrials.gov.

If you are dealing with an adrenal issue, our team at the Columbia Adrenal Center is here to help. Call (212) 305-0444 or request an appointment online.