Adrenal incidentalomas fall into one of three categories:

In general, tumors that are functional, malignant, and/or large should be removed.

In determining the treatment of adrenal incidentaloma, two questions must be asked: 1) is it functional and 2) is it cancer (i.e. malignant).

Size and appearance on imaging can help assess the risk for adrenocortical cancer in an adrenal incidentaloma. enign tumors generally have smooth borders, a Hounsfield unit (i.e. a measure of how dense different tissues are on CAT scan) less than 10, and/or are neutral on T2-weighted MRI. If a tumor is bright on T2-weighted MRI, has a Hounsfield unit greater than 10 on CAT scan, irregular borders, or evidence of invasion into surrounding organs, it is likely to be malignant. Size is the best indication of cancer in an adrenal incidentaloma. The larger the tumor the higher the risk of adrenocortical cancer. 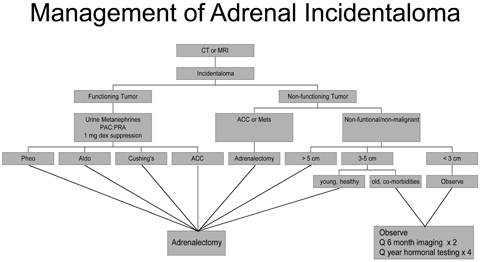 For small, non-functional tumors that are being observed, the patient should have hormonal testing every year for 5 years and repeat imaging every 6 months to a year for a few years. Studies have shown that 25% of adrenal incidentaloma will grow and up to 20% will become functional over time. Of those that become functional, most develop Cushing's syndrome.