Cushing's syndrome is a disease in which the body makes too much cortisol. Cortisol is a steroid that is made by the adrenal glands. Cortisol is necessary for daily life and helps the body respond to stressful events, regulates the sleep-wake cycles, and helps regulate the body's response to inflammation. A special part of the brain called the pituitary makes a hormone called adrenocorticotrophic hormone (ACTH) that controls the release of cortisol from the adrenal glands. Although cortisol is essential to life, constantly high levels of cortisol can damage the entire body.

The main causes of Cushing's syndrome are ACTH-dependent disease (when the body makes too much ACTH which in turn increases the cortisol production), ACTH-independent disease (when the adrenal is making too much cortisol and the ACTH is therefore low), and iatrogenic disease (when the patient is taking prescription steroids). Prescription steroids called glucocorticoids, like prednisone, are used to treat patients who had a transplant or who have diseases such as rheumatoid arthritis, asthma, or inflammatory bowel disease. Even if the patient is taking the right dose of steroid for their condition, they may develop Cushing's syndrome. ACTH-dependent and -independent disease can be caused by the following sources: 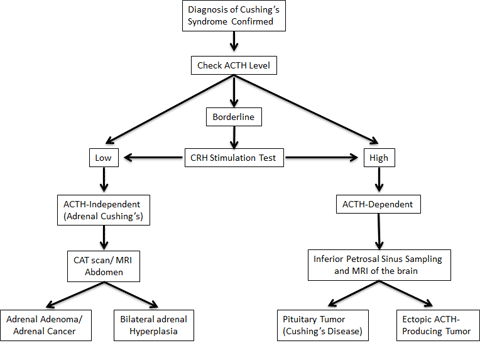 Cushing's Syndrome can affect many different organs in the body and causes a variety of symptoms:

Patients with Cushing's Syndrome make too much cortisol and do not lower their cortisol levels after being given artificial steroid in pill form. There are a number of ways to see if a patient is making too much cortisol:

If it is confirmed that the patient is making too much cortisol, then a low dose dexamethasone suppression test will see if the cortisol levels will drop by giving steroid in a pill. This test involves taking a pill containing 1mg of Dexamethasone (the artificial steroid) at 11PM and then checking the blood cortisol level at 8AM the next morning. If the level does not drop (i.e. does not suppress), then the diagnosis of Cushing's syndrome is confirmed.

Once a diagnosis of Cushing's Syndrome is made, the next step if to figure out what is causing the problem—i.e. is it an adrenal tumor (adrenal Cushing's), a pituitary tumor (Cushing's disease), or a tumor elsewhere in the body (ectopic ACTH-producing tumor). A blood ACTH level will be done to help determine the cause. If the ACTH level is high or normal than the cause is either a pituitary tumor or ectopic ACTH-producing tumor. Typically a brain MRI will be done to see if there is a pituitary tumor. If this is negative, then a special test called inferior petrosal sinus sampling will be done. This test involves feeding a catheter into the veins that come from the pituitary gland through a small needle stick in the groin and measuring blood samples to see if there is increased production. If the ACTH level is low or suppressed, then the cause is an adrenal tumor and a CAT scan or MRI of the abdomen will be done to see if one or both adrenal glands are involved.

Patients with Cushing's disease (i.e. a pituitary tumor) typically have benign tumors that are removed by a neurosurgeon. This operation is usually performed through the patient's nose in an operation called transsphenoidal surgery. In cases where surgery cannot cure the patient, other therapies like directed radiation treatment (i.e. Gamma Knife) may be successful. If surgery, radiation, and medications fail to control Cushing's disease, removal of both adrenal glands may be needed.

Patients with Cushing's syndrome caused by an adrenal tumor can usually be cured by removal of either one or both adrenal glands, depending on which adrenal glands are involved. Almost all of these operations can be done using minimally invasive techniques such as laparoscopy (i.e. making 3 or 4 very small incisions and using a small camera and special instruments). (See Adrenal Surgery) In Cushing's syndrome caused by one hyperactive adrenal gland, the other adrenal gland temporarily shuts down because the hyperactive gland is "doing all the work." It takes some time for this other gland to "wake up" and start making cortisol again. During and after the operation to remove one diseased adrenal gland, patients receive extra steroids through the IV and pills until the other adrenal starts working again. This steroid dose will be slowly lowered over time until it can be stopped safely. Patients having both adrenal glands removed will also receive steroids in the operating room and will need steroid pills for the rest of their lives.