Lung Cancer is a disease that results from an uncontrolled overgrowth of cells within the lung.

Lung cancer is one of the most common forms of cancer in the United States, with more than 200,000 new cases each year. It is the leading cause of death from cancer. It mostly affects those over 65 years of age and is slightly more common in men.

Lung cancer usually begins in one lung. If left untreated, it can spread to lymph nodes or other parts of the chest, including the other lung. Lung cancer can also spread throughout the body to the bones, brain, liver or other organs.

Lung cancer survival is related to the cancer's stage — the size and location of the tumor, whether the cancer has spread to surrounding lymph nodes, and whether it has spread to distant sites.

There are three types of non-small cell lung cancer:

Small cell lung cancer is less common, but it grows more rapidly and is more likely to spread to other organs in the body.

Smoking is the biggest single risk factor for lung cancer in general, although non-smokers may also develop small cell lung cancer. Exposure to substances such as asbestos, radon gas, uranium, arsenic, and diesel exhaust are also known to increase the risk of lung cancer. A family history of lung cancer also can be a risk factor.

Symptoms of lung cancer include:

Many lung cancers are identified when patients undergo a chest X-ray or CAT scan for an unrelated reason — a cold, cough, or other respiratory symptoms. 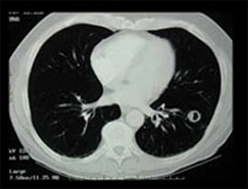 Learn about the CT Lung Cancer Screening Program at Columbia »

Evidence suggests that in high-risk individuals, CT (computed tomography or CAT) screening is the best method to detect lung cancer in its earliest stage. The majority of lung cancers originate as a small growth or nodule in the lung. Screening CT scans are extremely sensitive in detecting nodules as small as 2 or 3mm within the lungs — much smaller than can be viewed on a conventional chest X-ray. In fact, studies on CT screening have found that the majority of lung cancers that appeared on CT scans could not be detected on a chest X-ray that was performed simultaneously.

PET is a powerful, non-invasive, diagnostic tool that detects biochemical changes in body tissues. To feed their rapid growth, tumors consume more glucose than healthy tissues. The PET scanner, which creates a color-coded image of the body's chemical function reveals the cancer as red "hot spots" of activity. PET/CT is the combination of PET and CT imaging techniques within a single machine. The individual PET and CT scans are taken concurrently while the patient remains in place, and can be presented separately or as a single, overlapping, "fused" image.

The two techniques present different types of information about the human body: while PET shows chemical activity, CT shows anatomical structures. For example, a PET scan would highlight a tumor's increased glucose consumption, while a CT scan would reveal its physical mass. The fused PET/CT image provides a more reliable alternative to the traditional side-by-side visual comparison of PET and CT images.

Incorporating PET scanning often can guide treatment plans — from indicating whether a biopsy is necessary, to guiding the shape of the area to receive radiation therapy, to pinpointing the surgical site.

Electromagnetic Navigation Bronchoscopy (ENB) provides a computer-generated image of the lungs in order to view suspicious nodules. This technology allows for the biopsy of nodules that would otherwise be inaccessible, with fewer risks of bleeding or other complications.

For patients with non-small cell lung cancer (NSCLC), the use of chemotherapy in advanced disease has become routine with the advent of more effective drugs such as Gemzar, Navelbine, Taxol, and Taxotere. The challenge is to find the best combination and sequence of these drugs, and this emerging science is actively under study.

Patients with NSCLC that has spread to lymph nodes in the chest but who are still recommended for surgery, will benefit from chemotherapy given prior to their surgery.

In addition to providing specific therapies for lung cancer, supportive measures for pain management, anemia treatment, and the relief of other local symptoms should be given.

Treatment of lung cancer is stage dependent. For complete information on cancer staging, go to the American Joint Committee on Cancer.

If surgery is recommended, the type and extent of surgery will depend on the patient's specific stage, location, and form of cancer. The larger the nodule, the more lung tissue needs to be removed. A lung resection is a surgical procedure to remove a damaged or diseased portion of a lung, or a whole lung. Lung resection surgery offers the best opportunity for curing lung cancer when the disease is caught in its early stages.

In some cases, surgical removal may not be an option. For those patients who are candidates for lung resection surgery, a range of approaches is available. If possible, minimally invasive techniques that reduce pain and aid in the patient's recovery may be used.

In this minimally invasive technique, the surgeon makes two or three one-inch incisions between the ribs. A camera attached to a telescope (which magnifies the field of view), is placed in one of the incisions. The camera is used to examine the entire chest cavity, including portions of the lung. The surgeon then excises the nodule and gives it to the pathologist to examine under a microscope. If the nodule is cancerous, the surgeon can remove the entire lobe where the cancer has grown.

A VATS lobectomy offers a significant advantage to the patient because it reduces both the recovery period and the amount of postoperative pain, lowering the need for pain medications. Patients who undergo this procedure return to normal activities much faster than those who undergo a more extensive lobectomy performed through a thoracotomy incision.

After neoadjuvant therapy or if the tumor is very large, a thoracotomy may be required. A thoracotomy incision is made between the ribs. It extends from the patient's side, under the arm, and up the back. The incision extends for about eight to nine inches. It requires dividing some chest wall muscles and spreading the ribs. If a thoracotomy incision is required to remove the lung cancer, our surgeons are able to perform the surgery with far less patient discomfort than was possible a decade ago. All of our patients are given an epidural catheter through which we provide postoperative pain medication. The pain relief from the epidural is quite effective. Patients are able to get out of bed on the first day after surgery and walk around as required.

Occasionally, if the cancer is quite large or very central in the lung — close to where the major bronchus separates from the trachea — the only way to completely remove the cancer is to take out the entire lung. This procedure is referred to as a pneumonectomy. When you remove the entire lung, you obviously eliminate more viable lung tissue as well. A higher complication rate, therefore, is associated with this procedure. For that reason pneumonectomy is usually not performed unless absolutely necessary to try to cure the cancer.

If you need help for lung cancer, we’re here for you. People who come to us for lung cancer treatment benefit from the combined resources of a team of experts across multiple subspecialties. Every week, our thoracic surgeons, pulmonologists, medical oncologists, radiation oncologists, radiation therapists, and pathologists meet to discuss updates and plans for each one of our patients. Benefiting from this team approach, patients are offered individualized treatment, which may include preoperative or postoperative multimodality therapy, for example, a combination of chemotherapy and radiation therapy in conjunction with surgery. Such an integrated effort has been shown to improve survival from lung cancer.

In cooperation with the Division of Oncology, we also offer many innovative clinical trials for patients with all stages of lung cancer. Several of these trials are testing the newest drugs against lung cancer and are only available at Columbia University Irving Medical Center. Learn more about clinical research for lung cancer ».