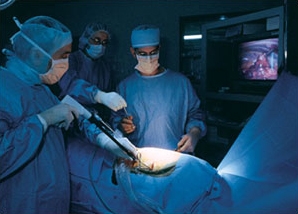 Minimally invasive thoracic surgery, also known by the name VATS (short for Video-Assisted Thoracic Surgery), is a procedure that involves smaller incisions in the chest wall than traditional “open” surgery and does not require the need to spread the ribs to gain access to the lungs or esophagus.

VATS is used for a variety of diagnostic and therapeutic procedures. Benefits of the minimally invasive approach include less postoperative pain, shorter hospital stays, faster recovery from surgery, and a quicker return to full activity.

Some of the more common diseases being treated with VATS include:

Performed in the sympathetic nerve through two microscopic incisions, Endoscopic Thoracic Sympathectomy (ETS) seeks to eliminate the constant stimulation of sweat glands in patients with hyperhidrosis, while maintaining other normal nerve function.

The Transaxillary Approach for Thoracic Outlet Syndrome is the preferred method of treatment for patients with severe symptoms related to the compression of the brachial plexus. The transaxillary approach combined with video assistance affords complete visualization of the thoracic outlet through a small incision, enabling decompression with less postoperative pain.