History of Medicine: The Mysterious Appendix 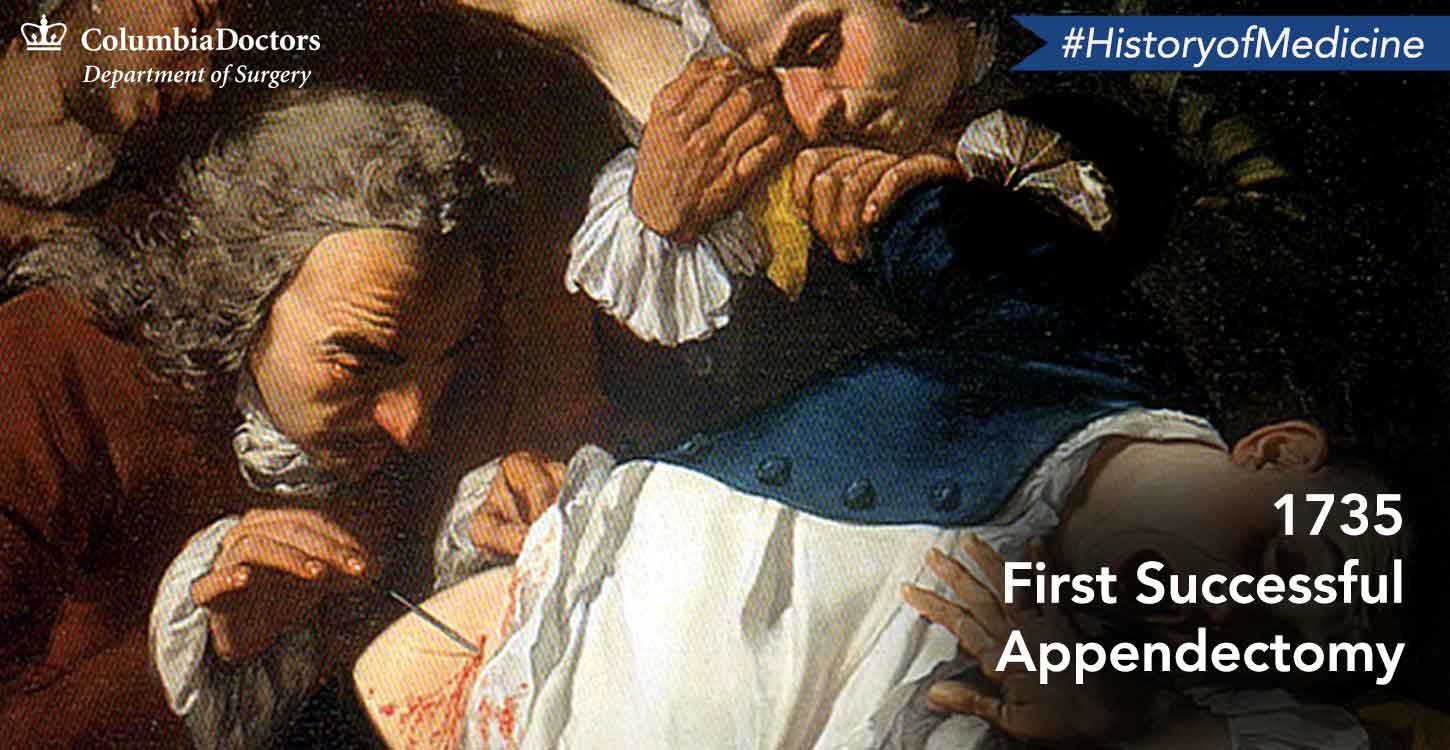 What is tiny, shaped like a worm, and hangs off the side of the colon? If you guessed the appendix, you were right.

Since its debut in the annals of medical literature, the appendix has always held some mystery. In the 1500s, anatomists were able to identify its structure within the body, but could only guess at its purpose. However, doctors did recognize that it could become inflamed and cause serious disease.

In 1735, Dr. Claudius Amyand performed the world’s first successful appendectomy, at St. George’s Hospital in London. The patient was an 11-year old boy whose appendix had become perforated by a pin he had swallowed. The first successful operation to treat acute appendicitis was performed soon after, in 1759 in Bordeaux. General anesthesia was not available until 1846, so these operations required many assistants to restrain patients during what were undoubtedly very painful procedures.

Surgical treatment for appendicitis began in earnest during the 1880s. Although doctors struggled to decide who should undergo the knife – some patients would recover on their own without surgery – surgical technique and anesthesia had improved outcomes to such an extent that surgery would rapidly became the gold standard approach. By the end of the 20th century, laparoscopic surgery replaced open surgery in most cases, and laparoscopic appendectomy is now considered one of the safest, lowest-complication surgical procedures performed today.

Despite this excellent track record, many questions about the appendix still persist. The causes of acute appendicitis have yet to be identified, and we do not yet understand why the appendix will rupture in some patients and recover in others. Only in 2007 did researchers finally offer a compelling case for the function of the appendix: the tiny organ appears to play a role in both the digestive and immune systems by acting as a storehouse for valuable bacteria, which are enlisted when the gastrointestinal tract loses its beneficial gut flora.

More recently, researchers are revisiting the question of whether antibiotics are just as effective as surgery for treatment for acute appendicitis. In the 1940s and 1950s, doctors in England began treating patients with antibiotics – with excellent results. During the Cold War, men on submarines received antibiotics instead of an appendectomy, as the submarines could not surface for six months or more, and patients reportedly did well with this approach. And five recent European studies reported findings consistent with those anecdotes: 70% of patients recovered using antibiotics rather than surgery in these studies. In light of this evidence, a new study in California will attempt to verify whether antibiotics may be as good as surgery and offer a less invasive approach to the treatment of appendicitis.

To learn more about about appendicitis, visit the Division of General & Acute Care Surgery.

NOTE: The painting depicted is “Die Operation” (The Operation) by Gaspare Traversi in 1753.