Primary hyperparathyroidism (PHP) is a disease in which one or more of the parathyroid glands are hyperactive and make too much parathyroid hormone (PTH). This constantly high PTH level causes an increase in blood calcium levels. PHP is the most common cause of high blood calcium levels in the general population and occurs in about 28 out of every 100,000 people. PHP is twice as common in women than in men and becomes more common as people get older with most cases occurring after the age of 45. The average age of patients with PHP is 65 years old. In 80% of cases, PHP is caused by a single hyperactive gland (single adenoma). However, PHP can be caused by 2 or 3 hyperactive glands (double or triple adenoma) in 10% of cases or 4 hyperactive glands (4 gland hyperplasia) in another 10% of cases. High calcium levels may be caused by other conditions such as cancer and too much calcium in the diet among other things, so it is important to work with experienced parathyroid experts to make the proper diagnosis.

Although the causes of primary hyperparathyroidism (PHP) are not well understood, there are 2 main things which are known to put an individual at higher risk of developing the disease:

A family history of parathyroid disease carries the biggest risk for patients with first-degree relatives (mother, father, sister, brother), second-degree relatives (grandmother, grandfather, grandson, granddaughter), and/or multiple family members with parathyroid disease. PHP can be related to genetic syndromes called Multiple Endocrine Neoplasia type 1 (MEN 1) and Multiple Endocrine Neoplasia type 2 (MEN 2) Syndrome, and is usually the result of a specific genetic mutation in a part of the genome called the RET proto-oncogene. It is important that patients with a strong family history of PHP, as well as their families, be tested for this genetic abnormality (with a simple blood test) to see if they are at risk for developing the disease. Patients with MEN 1 Syndrome typically have pancreatic and pituitary tumors along with PHP. Patients with MEN 2 Syndrome typically have medullary thyroid cancer and pheochromocytoma (an adrenaline-producing tumor) in addition to PHP. See Medullary Thyroid Cancer » and See Pheochromocytoma ». While the majority of patients with MEN 1 Syndrome will develop PHP, only 33% of patients with MEN 2 Syndrome will develop PHP.

In the 1960's it was discovered that exposure of the head and neck areas to radiation during treatment of benign diseases increases the risk of developing PHP. Since that time, this link has been found with exposure to significant doses of radiation from a variety of sources including:

Of note, there have been NO long-term, high-quality studies that have demonstrated a link between diagnostic X-rays done for testing purposes and PHP. The doses of radiation associated with x-rays, CAT scans, and using devices such as cell phones, microwave ovens, etc. are too low to cause parathyroid disease. PHP may not develop for 30 to 50 years after the radiation exposure. People who were exposed to radiation are also more likely to develop thyroid nodules in general and should have any suspicious nodules evaluated. See Thyroid Nodules ».

Over time, PHP damages almost every part of the body. Depending on how severe the disease is, PHP may cause virtually no symptoms or it may create severe, life-threatening symptoms. Doctors use the phrase "stones, bones, groans, psychic moans, and fatigue overtones" to remember that PHP can cause kidney stones, osteoporosis (i.e. weak bones), abdominal pain (i.e. pancreatitis, reflux disease), mental issues (i.e. depression, irritability, worsening concentration, worsening short-term memory, "brain fog"), and fatigue or low motivation levels among other things. When calcium levels become dangerously high (i.e. 13-15 range), patients may present in hypercalcemic crisis where their organs are failing and they are in a comatose or near-comatose state. Fortunately, hypercalcemic crisis is rare. Currently, the most common way patients find out that they have PHP is during a routine blood test or evaluation for low bone density (i.e. osteoporosis).

PTH signals the body to absorb more calcium from food and also to break down bone in order to raise the blood calcium levels. In PHP, the PTH level is constantly high so the body is constantly losing calcium from the bones. Eventually, the bones can become weaker and weaker and patients are more and more at risk for fractures (i.e. broken bones). The strength of a patient's bones can be measured with a simple test called a bone density scan. In this test, a specialized X-ray measures the bone density at the hip, femur (leg), spine, and forearm. The strength of the bone is compared to a healthy 30-year-old adult's bone density and given a score called the T score:

The lower the T score, the higher the risk of breaking bones. In an extreme form of PHP a bone disease known as osteitis fibrosa cystica can develop, in which the bones become so weak that they become soft and deformed. Fortunately, this is a very rare problem. Studies done at Columbia have shown that within a year of a successful parathyroid operation, patients usually gain about 10% of their bone density back and in addition stop losing their bone density at the faster rate caused by PHP.

High blood calcium levels can lead to high urine calcium levels. High urine calcium levels can cause stones to form in the kidney. These stones can be quite painful as they pass through the urinary system. They can also cause infections, blood in the urine, and kidney damage. Approximately 15% of patients with PHP will develop kidney stones. After a successful parathyroidectomy, the risk of forming new kidney stones returns to baseline (i.e. patients have the same risk as the average person). 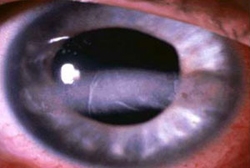 PHP may cause a number of problems with the heart and blood vessels that include hypertension (i.e. high blood pressure), coronary artery disease, atherosclerosis (i.e. hardening of the arteries), arrhythmias (i.e. abnormal heart rate), and left ventricular hypertrophy (i.e. enlarging of the heart). In turn these problems can lead to a higher rate of heart attack, stroke, and premature death.

The diagnosis of PHP is made by measuring the blood calcium, PTH, and vitamin D levels. Normally, the calcium and PTH levels move in opposite directions of one another. See Overview ». In PHP, one or more of the parathyroid glands constantly make too much PTH causing an increase in calcium levels. In the majority of cases of PHP, the calcium and PTH are both high (i.e. above the normal range). However, in cases of normocalcemic PHP, the calcium may be normal even though the PTH is elevated. In some cases of PHP, the calcium level may be higher than the normal range and although the PTH is in the middle or upper end of the normal range, the PTH is inappropriately high for that calcium level (normally, as the calcium rises above the normal range, the PTH should fall below 20 or 30). Many experts believe that normocalcemic primary hyperparathyroidism is a mild form of classic primary hyperparathyroidism and that many patients will eventually develop classic PHP. This chart demonstrates the blood results for different types of PHP:

It is important to check the vitamin D levels, because low vitamin D levels (i.e. vitamin D deficiency) can cause high PTH levels in a condition called secondary hyperparathyroidism. See Secondary Hyperparathyroidism ». In some cases, the 24 hour urine calcium levels should be checked to assess for the risk of kidney stones but also to rule out a rare condition called Benign Familial Hypocalciuric Hypercalcemia that does not require surgery. In this rare genetic condition, the blood calcium levels are high while the urine calcium levels are low. 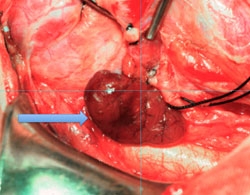 A non-invasive test that uses sound waves instead of radiation to create a picture. This test can often be done in the surgeon's office. This test is approximately 65% accurate in identifying abnormal parathyroid glands and the accuracy depends on the skill of the person performing the exam. 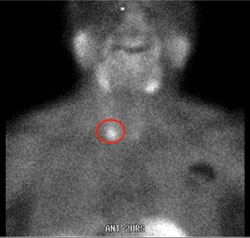 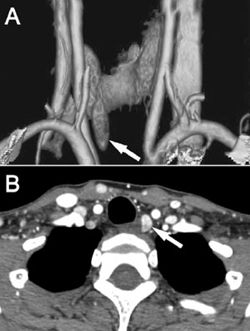 Is not very good at identifying abnormal parathyroid glands and is therefore not routinely used. In cases where ultrasound, sestamibi, and high resolution CAT scan are negative or in re-operative parathyroid surgery, MRI may occasionally be used.

A test in which a nodule that is suspicious for an abnormal parathyroid gland may be biopsied using a small needle under ultrasound guidance. The biopsy analysis includes looking at the cells to see if they look like parathyroid cells as well as measuring the PTH level in the sample. This test is not performed routinely and is usually only used if there is a question of whether or not a nodule is an abnormal parathyroid gland or something else like a thyroid nodule or an enlarged lymph node. 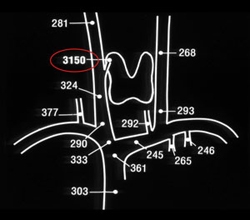 A special test in which a physician places a catheter into the large vein in the groin and then measures PTH levels from blood samples drawn directly from the veins that carry blood away from the parathyroid glands. Selective venous sampling is usually done in cases where ultrasound, sestamibi, and high resolution CAT scan are negative or in re-operative parathyroid surgery. This test is only available at select institutions and is usually performed by a vascular surgeon or interventional radiologist as an outpatient procedure.

Parathyroidectomy (i.e. surgical removal of the parathyroid gland) is the only known cure for PHP and is often the best treatment for this disease. In the hands of an experienced surgeon, parathyroidectomy will cure up to 98% of patients with this disease. Alternatives to surgery include observation and medical therapy. Patients who choose observation may have progressive worsening of their disease over time leading to an increased risk of kidney stones and osteoporosis. Most of the best medical therapy available is aimed at treating the symptoms of the disease rather than curing it. For example estrogen and bisphosphonates can improve or maintain bone density but will not fix the underlying problem. A new group of medications called calcimimetics (ex. Sensipar, Cinacalcet) "trick" the body into lowering the blood calcium level. However, calcimimetics will not cure the parathyroid disease and they do not seem to lower the risk of kidney stones or help protect bone strength. While surgical therapy is the best treatment for PHP, medical therapy may be chosen for patients who have medical problems that make them high-risk candidates for surgery.

If you are dealing with a parathyroid issue, our team at the Columbia Parathyroid Center is here to help. Call (212) 305-0444 or request an appointment online.