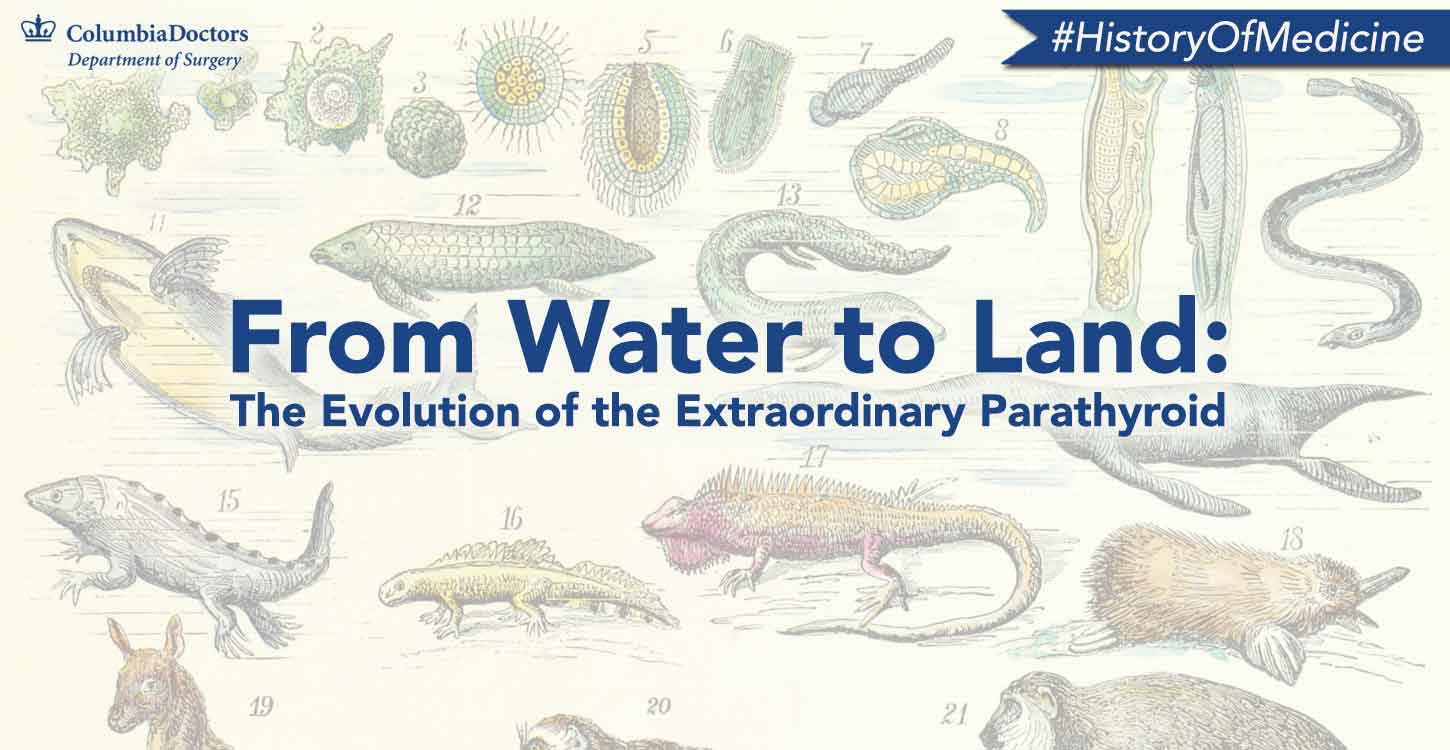 From Water to Land

In order to understand the parathyroid glands, we are going to take you back in time – far, far back, to about 375 million years ago when a group of vertebrates climbed out of the water and onto land.A generally accepted evolutionary theory holds that these new land vertebrates had descended from a line of fish that had air-sacs connected to the back of their throats. Also called “swim bladders,” these sacs could take in air which allowed the fish to control their buoyancy. When the fish transitioned to land, the swim bladders lost their buoyancy function and enabled the creatures to breathe air while on land, giving rise to the first lungs. These creatures would become the ancestors of the tetrapods, which include today’s amphibians, reptiles, and mammals.In addition to the need to breathe air, the transition from sea to land also required the first land animals to adapt in other essential ways. Their bodies had to be able to withstand a different sensation of gravity now that they were out of the water; they had to find ways to minimize water loss through the skin; and their sensory organs had to adapt to function in the air rather than water.Yet another important adaptation had to do with the way their bodies would access and regulate calcium, which is essential to the function and communication of every cell in the body.

Calcium is the most abundant mineral in the human body. In addition to providing strength and density for the bones, it conducts electrical currents along the nerves – meaning that our brain function depends on the proper flow of calcium in and out of nerve cells. Calcium is also responsible for muscle contractions. Too little calcium (hypocalcemia) can cause muscle spasms, feeling of pins and needles, heart problems, and seizures. Too much calcium (hypercalcemia) can cause lethargy, ‘brain fog,’ muscle weakness, anorexia, constipation, and even depression. The range for normal calcium levels is quite narrow, between 8.5 and 10.2mg/dL; if a person’s levels stray outside that narrow range, he or she will probably not feel too well.

How Our Bodies Evolved to Regulate Calcium

In the calcium-rich aquatic environment, sea animals had easy access to the mineral. Once on land, however, their bodies had to devise a new way to regulate calcium levels. Paleontologists have not come to agreement about precisely when this adaptation took place – estimates range from 100 to 300 million years ago – but the evolutionary answer to this problem took the form of the development of the parathyroid glands.

Humans have four parathyroid glands located in the sides of the neck, while other amphibians, reptiles, birds, and mammals have four to six. It is interesting to note that although they produce parathyroid hormone, fish don’t have parathyroid glands. It is that fact that led evolutionary biologists to believe that the organs had their origin in the oceans, so to speak.

And despite their small size – the glands are about the size of a grain of rice – the parathyroids’ role is extremely powerful. Blood filters through them, and if calcium levels are too low, parathyroid hormone (PTH) is secreted to bring more calcium into the blood stream. If calcium levels are too high, PTH production will slow down or stop altogether until the levels stabilize. In most people, this process happens seamlessly and constantly, maintaining just the right levels for our brains and muscles to work properly. If we have too much or too little calcium, the effects will be immediate, and our bodies will respond perfectly to maintain homeostasis and keep our systems in perfect balance.

Discovering An Organ The Size of a Grain of Rice

English Physician Nicholas Culpeper recorded his observation of patients with very soft bones and muscle spasms back in 1650, but at that time, the tiny glands had yet to be discovered, and the cause of such illnesses was still a mystery. The big break came in 1852 when Englishman Sir Richard Owen discovered the existence of the parathyroid glands in a rhinoceros, and they were initially named the “glands of Owen” in his honor. Then in 1880, Swedish medical student Ivar Viktor Sandtröm discovered them in humans and realized they existed in many other animals as well. He dubbed the new organs “glandulae parathyroidae.”

Challenge of Performing Surgery on the Parathyroid Glands

Attempts to treat parathyroid disease are barely a century old, beginning with the first unsuccessful surgery to remove a parathyroid tumor in 1925. The field has dramatically grown in that short time, however. Today, endocrinologists have tremendous depth and breadth of knowledge about the physiology and function of the parathyroid glands, and specialists have developed advanced techniques to visualize and treat parathyroid tumors and diseases. At cutting-edge medical centers such as Columbia University’s New York Parathyroid Center, surgeons use small, minimally invasive incisions that result in little or no scarring of the neck, and they are able to measure the levels of PTH during surgery in order to make sure the procedure is successful.

The Future Is Bright

As is the case with so many specialties of medicine, the last 100 years has seen exponential growth in knowledge about the function of the parathyroid glands, as well as how to effectively intervene medically and surgically when the organs fail. Columbia doctors and surgeons are now looking to the next level of treatments of parathyroid disease – from autotransplantation to cryopreservation – and patients can guarantee that Columbia University’s New York Parathyroid Center will be a leader in this field for the next 100 years and beyond.