History of Medicine: The Ingenious Surgery that Saved the World’s Smartest Man 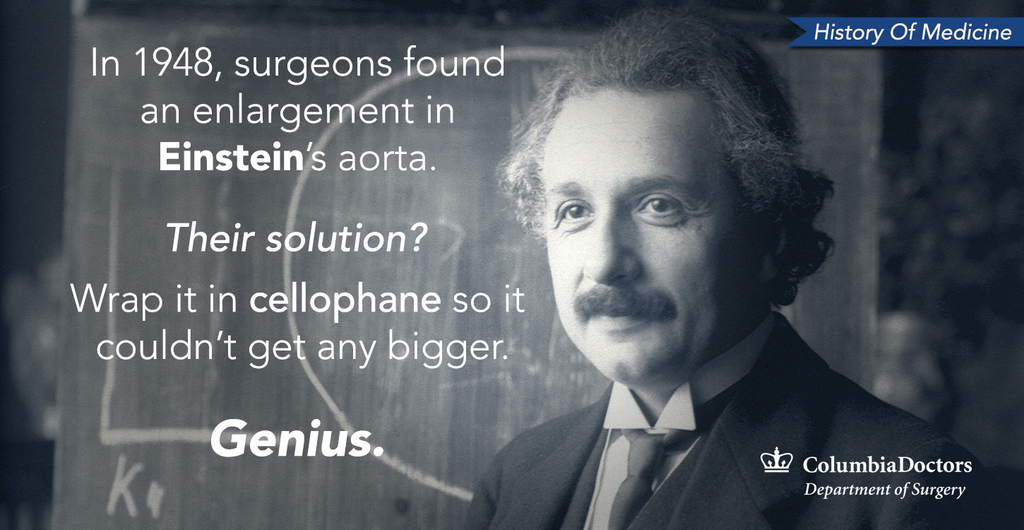 It was a mystery even Albert Einstein couldn’t solve. For years, the brilliant physicist was plagued with abdominal pain. At times it was so severe it would cause him to vomit. Finally, in the fall of 1948, he sought the advice of Dr. Rudolph Nissen, a thoracic surgeon at Brooklyn Jewish Hospital.

Nissen recommended an exploratory surgery, a procedure that would allow a direct look inside the 69-year-old genius. What Nissen discovered was a large aortic aneurysm—a widened, weakened stretch of the body’s largest artery.

A normal aorta runs down the abdomen as a long, straight tube; an aorta with an aneurysm looks more like a snake that’s swallowed a balloon, bulging outward at the aneurysm site.  And just like an actual balloon, an aneurysm can continue growing until it bursts, creating what’s called an aortic rupture—a true medical emergency that can quickly turn fatal if not treated quickly.

So what did Nissen do to prevent the balloon inside Einstein from popping? He wrapped the aneurysm in cellophane. Yes, cellophane—the same stuff you keep in the kitchen to wrap up leftovers—was used to save the life of the smartest man on earth. Perhaps even more surprising, this low-tech solution wasn’t any sort of hail-mary on Nissen’s part; it represented the cutting edge in aneurysm treatment at the time.

What doctors like Nissen understood was that cellophane worked as more than just a constrictive wrapper. When placed within the body, cellophane triggers what’s known as a “foreign body reaction.” Essentially, your body realizes it has something inside it that shouldn’t be there, and it responds by sending immune cells to destroy the perceived invader. This attack affects not just the cellophane, but the parts of the aorta wrapped underneath, leading to scarring and ultimately narrowing of the artery in the affected area. It was a simple yet effective solution to a deadly problem.

Today, surgeons typically treat an aortic aneurysm by removing the ballooned area and replacing it with a graft—a fabric tube—that bridges the gap. In recent decades, less invasive options have also developed. But in 1948, a simple sheet of cellophane was enough to do the job.

Einstein left the hospital three weeks after surgery and went on to continue his physics work in a state of semi-retirement in Princeton, New Jersey. The cellophane surgery had succeeded in adding years of symptom-free time to his life, but by April 13th, 1955, it was no longer enough to keep his aneurysm from rupturing. After complaining of severe pain in his belly and back, Einstein was taken to Princeton Hospital. His only chance for survival was another surgery, but Einstein, now 76 and satisfied with a long and meaningful life, refused. As he told his doctors, “I have done my share, it is time to go. I will do it elegantly.” Wise words from a remarkably wise man.